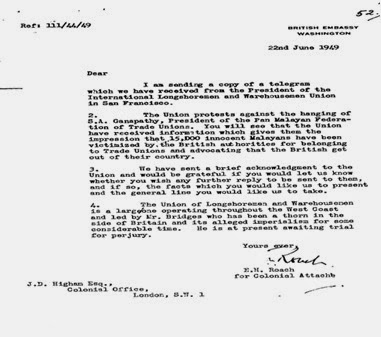 While going through some files related to S. A Ganapathy in National University of Singapore Library, I came across a protest telegram dated 10th June 1949 from the International Longshoremen and Warehousemen Union in San Francisco (which primarily represent dock workers in United States) to British Embassy in Washington.

(Apologies for the fine print of the copy) The telegram as follows:

I am sending a copy of a telegram which we have received from the President of the International Longshoremen and Warehousemen Union in San Francisco.

2. The Union protest against the hanging of S.A Ganapathy, President of the Pan Malayan Federation of Trade Unions. You will see that the Union have received information which gives then the impression that 15,000 innocent Malayans have been victimized by the British authorities for belonging to Trade Unions and advocating that the British get out of their country.

4. The Union of Longshoreman and Warehousemen is a large one operating throughout the West Coast and led by Mr.Bridges who has been a thorn in the side of Britain and its alleged imperialism for some consideration time. He is at present awaiting trial for perjury.

Yours ever,
E. H. Roach
For Colonial Attache 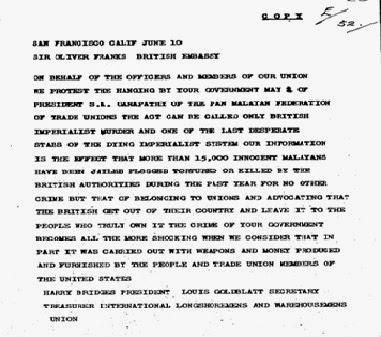 ON BEHALF OF THE OFFICERS AND MEMBERS OF OUR UNION WE PROTEST THE HANGING BY YOUR GOVERNMENT MAY 4 OF PRESIDENT S.A GANAPATHY OF PAN MALAYAN FEDERATION OF TRADE UNIONS

OUR INFORMATION IS THE EFFECT THAT MORE THAN 15,000 INNOCENT MALAYANS HAVE BEEN JAILED FLOGGED TORTURED OR KILLED BY THE BRITISH AUTHORITY FOR THE PAST YEAR FOR NO OTHER CRIME BUT THAT OF BELONGING TO UNIONS AND ADVOCATING THAT BRITISH GET OUT OF THEIR COUNTRY AND LEAVE IT TO THE PEOPLE WHO TRULY OWN IT

THE CRIME OF YOUR GOVERNMENT BECOMES ALL MORE SHOCKING WHEN WE CONSIDER THAT IN PART IT WAS CARRIED OUT WITH WEAPON AND MONEY PRODUCED AND FURNISHED BY THE PEOPLE AND THE TRADE UNION MEMBERS OF UNITED STATES.

It is quite a revelation to read a telegram from one of the most prominent unionists in US, Harry Bridges who had lead the International Longshoremen and Warehousemen Union for more than 40 years. Bridges was prosecuted by the U.S. government during the 1930s, 1940s, and 1950s. His conviction by a federal jury for having lied about his Communist Party membership was overturned by the Supreme Court in 1953.


The Sunday Tribune dated 12th June 1949, carried the news top officials of the International Longshore's and Warehouse's Union (ILWU) protest against hanging of Ganapathy and term the execution as "imperialist murder." The protest telegram from Harry Bridges (President) and Louis Goldblatt (Secretary General) was sent to British Ambassador.

It is sad that British government portrayed Ganapathy as a communist terrorist and a bandit. For many years, it has also imparted its tactic to demonise Ganapathy and PMFTU through enforcement of draconian law of Sedition Act and Internal Security Act. Even, there were arrests made in after independence related to Ganapathy.
Posted by Saminathan Munisamy at June 04, 2014