Sambasivam Goes Back to India - The Straits Times - 2nd June 1950

Sambasivam - Finally, he gained back his precious freedom from the clutches of British, only to be murdered in India.


Sambasivam Goes Back To India 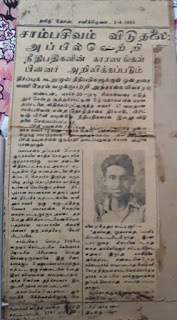 SAMBASIVAM, the 27-year-old South India trade unionist who was reprieved by the Privy Council has left the Federation for Madras.

He was put on the steamship Rajula at Port Swettenham yesterday afternoon.

The Federation Government announced yesterday that his departure was made under Section 17 (C) of the Emergency Regulation of which empowers the High Commissioner to order certain person detained under Section 1 of Regulation 17 “to leave and remain outside” the federation.


After leaving Johore Bahru Goal on April 1, when the Privy Council upheld his appeal against the death sentence, Sambasivam was re-arrested under the Emergency Regulations.

Seen in Johore Bahru before left for Port Swettenham Sambasivam told the Straits Times that he plans to return to his native village in Madras province. He will, after a rest, work on farm owned by an uncle.

Sambasivam was Secretary of the Segamat Rubber Workers’ Union when the Emergency was declared. He went underground, but in Sept.1948, he was arrested at Bukit Kepong, in Johore. He was charged with carrying illegal fire-arms and was sentenced to death by the Johore Bahru Supreme Court. 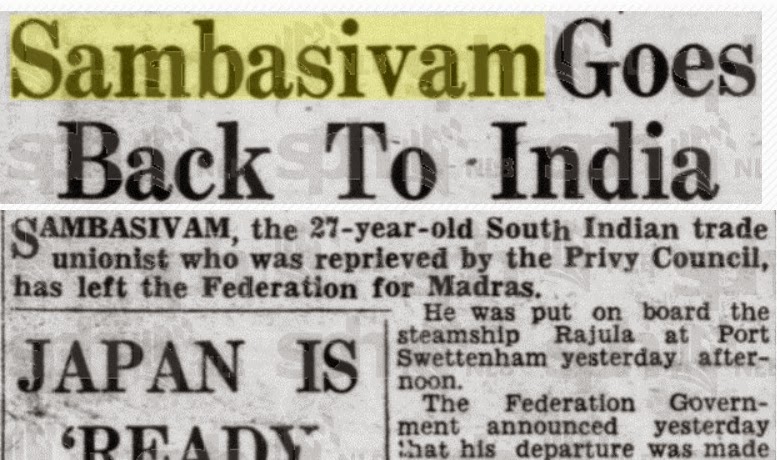 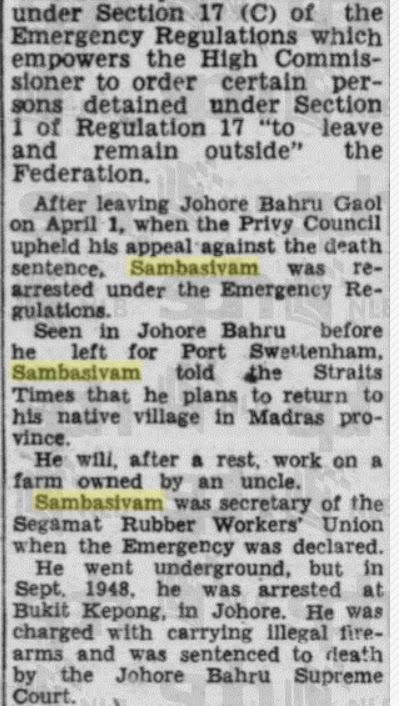