Another correspondence dated 7th May 1949, that I found in NUS Library, written by a British citizen, Bernard W.Orna - a common man who would like to "charge British authority with crime against humanity" and "wish to dissociate" himself from British policy in Malaya. This person would not have met Ganapathy but was daring enough to state his dissatisfaction over British policy in Malaya. 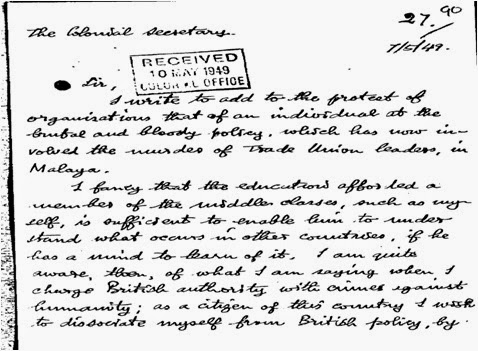 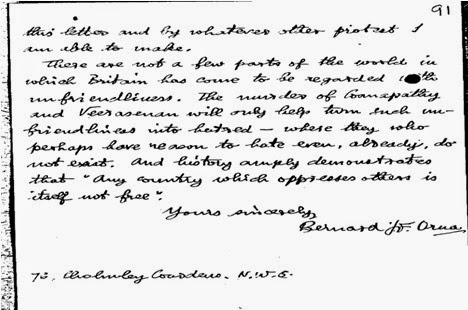 Going through this files, I found dozens of letters and telegrams not only from trade unions all over Britain, US and Europe condemning Ganapathy's execution and seeking further explanation on his death but also from individuals like Bernard Orna who have written personally to Secretary of Colonies.

The letter as follows:

I write to add to the protest of organizations that of an individual at the brutal and bloody policy, which has now involved the murder of Trade Union Leaders in Malaya.

I fancy that the education afforded a member of the under classes, such as myself, is sufficient to enable him to understand what occurs in other countries, if he has a mind to learn of it, I am quite aware, then, of what I am saying when I charge British authority with crime against humanity, as a citizen of this country I wish to dissociate myself from British policy, by this letter and by whatever other protest I am to make.

These are not a few parts of the world in which Britain has come to be regarded with unfriendliness. The murder of Ganapathy and Veerasenan will only help turn such unfriendliness into hatred – where they who perhaps have reason to hate even, already, do not exist. And history amply demonstrates that “any country which oppresses others is itself not free.”