The Straits Times, May 24th, 1941 carried the statement by Government to justify on deportation of R.H Nathan to India.

The government stated that it was aware of the activities of a small group of persons which was subversive and contrary to public interest.

Even though demands for increase of wage were met in some estates, the government became concerned as the group has been visited estates urging more demand and strike.

The government claimed that the group has been sowing distrust toward the government and the labour department among labourers. Political doctrines which are foreign to Malaya too were preached.

As a result of this labour forces armed with sticks, changkols, parangs and knives came out to strike without formulating any grievances nor demands. In same cases the managers were assaulted and property was damaged, it claimed!

It also claimed that R.H Nathan who had never worked on rubber estates to be the leader of this small group. They linked R.H Nathan to foreign organisations which activities are inimical to public interests in Malaya.

Other allegation towards R.H Nathan were instigating violence towards estate managements and against police. R.H Nathan also uttered words which show his disloyalty to the Empire! 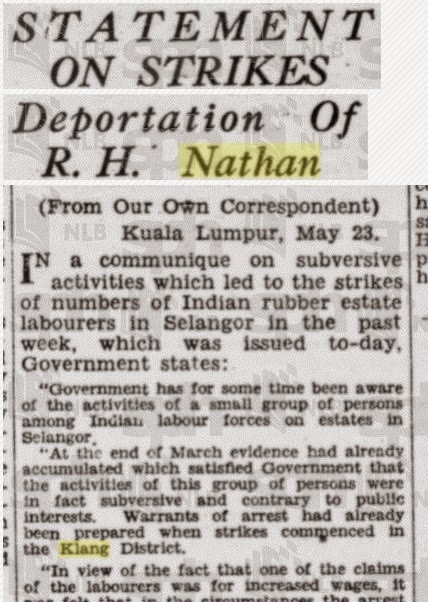 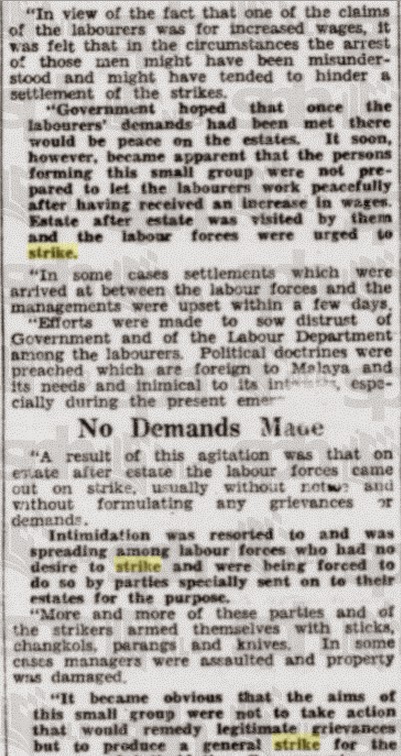 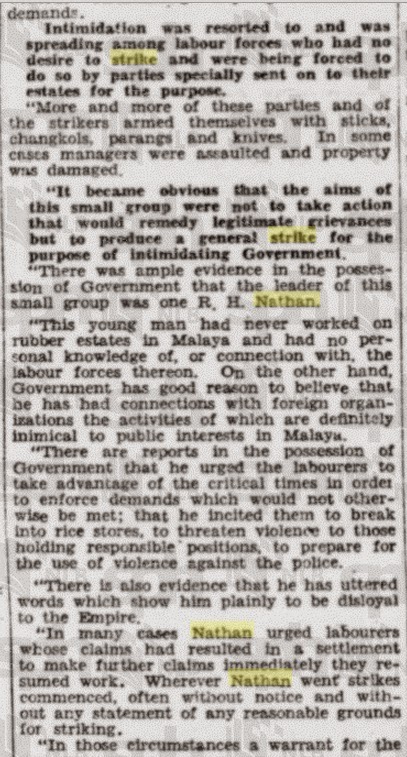 Posted by Saminathan Munisamy at April 29, 2015 No comments:

I would like to expand my horizon to include another Indian leader known as C.V Kuppusamy. In one of my postings,  I have written that according to Mr Sudarman (Singapore), C.V Kuppusamy was a top ranking leader of Indian section under CPM, who was in charge of the publication and propaganda. C.V Kuppusamy with S.Amaloo had been acknowledged by Michael Stenson in several occasions in his work, Class, Race and Colonialism in West Malaysia - notably during the 1941 Klang Strike where C.V Kuppusamy and S. Amaloo had aided R.H Nathan.

Early records of C.V Kuppusamy involvements in social reform can be traced back to 1939. The Straits Times dated 29th October 1939, reported that Selangor Tamil Reform Society organizing talks for Tamils at a market ground in Banting and C.V Kuppusamy will speaking on "The Situation of Tamils"
After 1948, C.V Kuppusamy still continue his involvement in Tamil Reform Movement. The Straits Times July 26th, 1952 reported that the Singapore Registrar of Society has approved the formation of the Tamil Diffusion League, an organisation to spread Tamil culture and art under the leadership of S.K Shanmugam. C.V Kuppusamy was one of the council members.

Posted by Saminathan Munisamy at April 28, 2015 No comments:

The Straits Time dated 26th June 1961, reported that R G Balan, 42, who was released from detention about a year ago, was married at Chettiar Hall Kuala Lumpur according to Hindu rites on Saturday - June 24th, 1961.
The bride, M. Sivapakiam is a machine operator at Malayan Railway Headquarters. Balan was employed with Ministry of Interior. 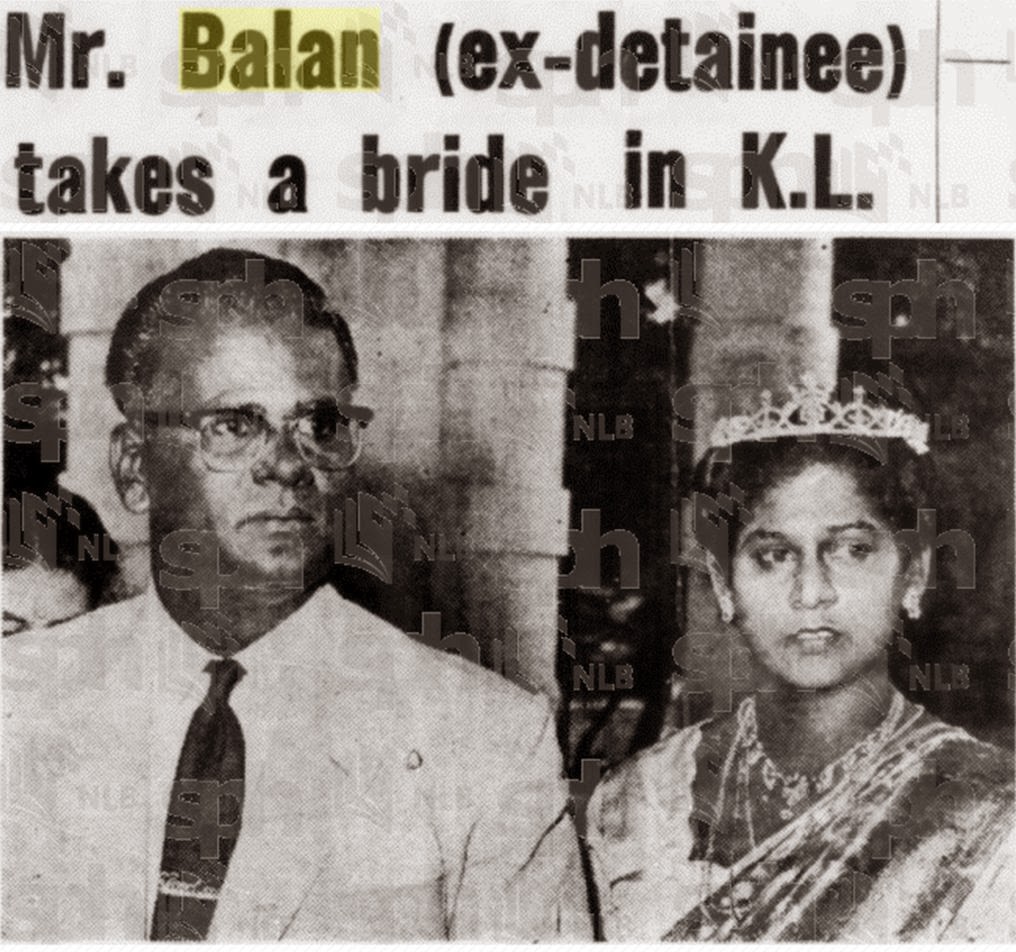 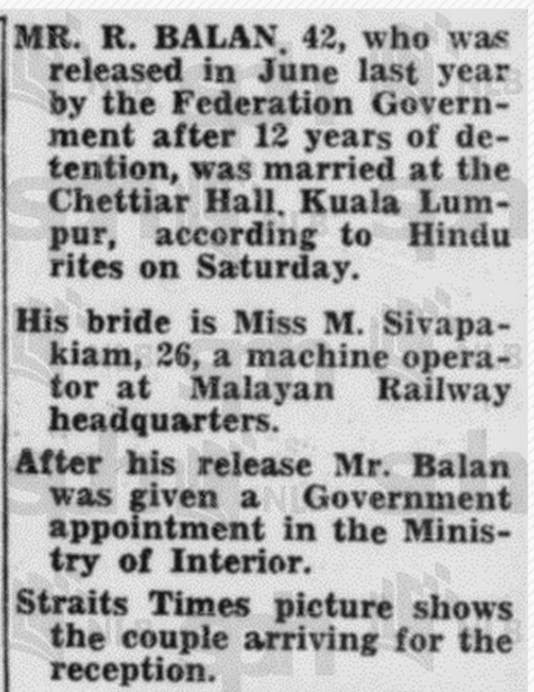 Posted by Saminathan Munisamy at April 28, 2015 No comments: 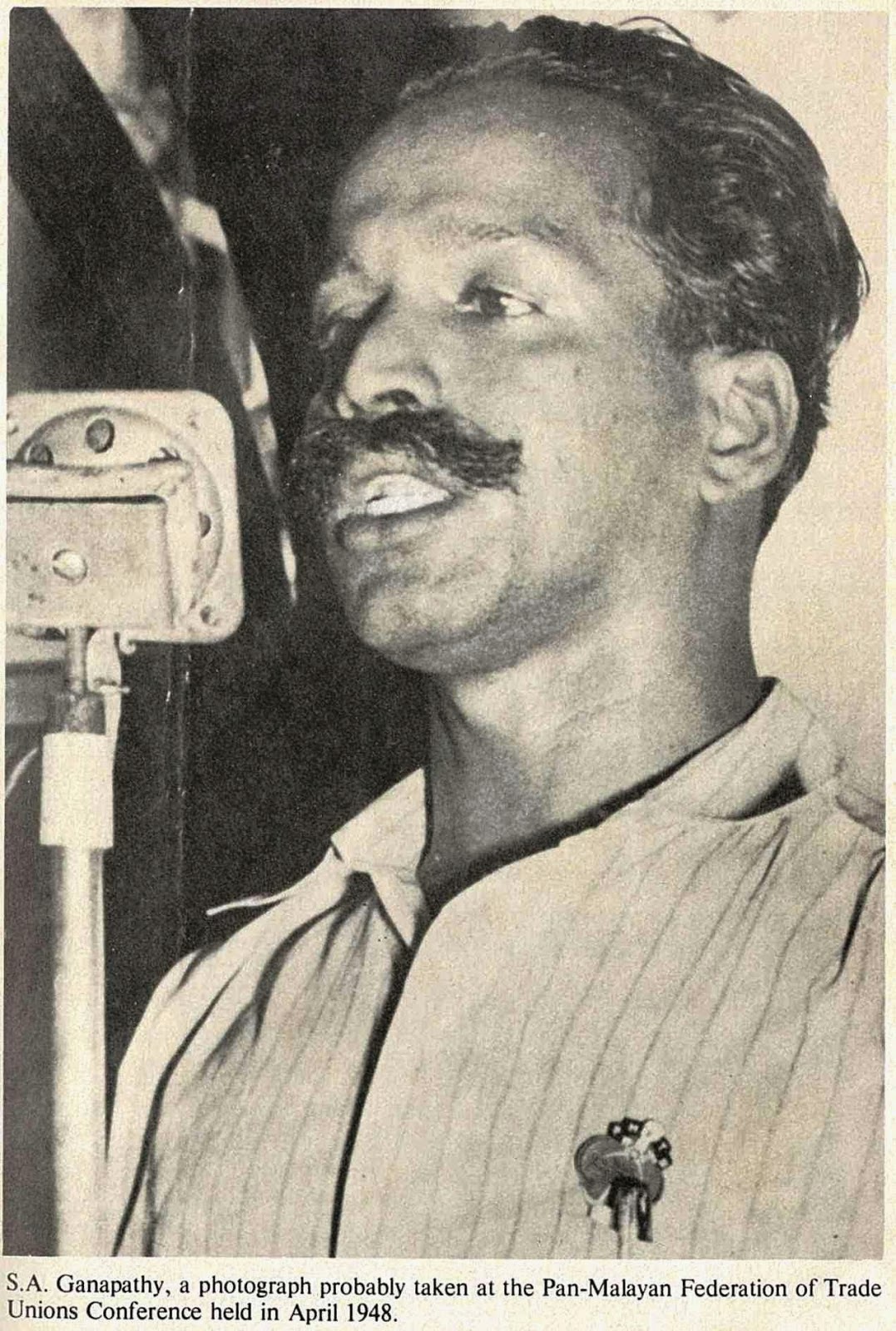 Politics Is A Struggle For Food, Clothing Argues President of PMFTU

KUALA LUMPUR, Oct.15 - “The fight for a democratic constitution is a fight for better food and clothing,” declared Mr. K. Ganapathy, President of PMFTU, addressing the 3rd session of the Executive Bureau at Ipoh this morning.

Mr. Ganapathy  said that a democratic constitution was most vital to the promotion of the standard of living of the workers. He added: If the economic and the financial of the country is to be improved so as to place industries in a position to pay higher wages, if we are to have better social services, if there is to be equitable distribution of income and resources, these can only be secured by influencing the legislation of the country.”

He said that the PMFTU gave its whole-hearted support to the Malaya-wide campaign now being carried on by the Putera and the AMCJA against the acceptance of Revised Constitutional Proposals. 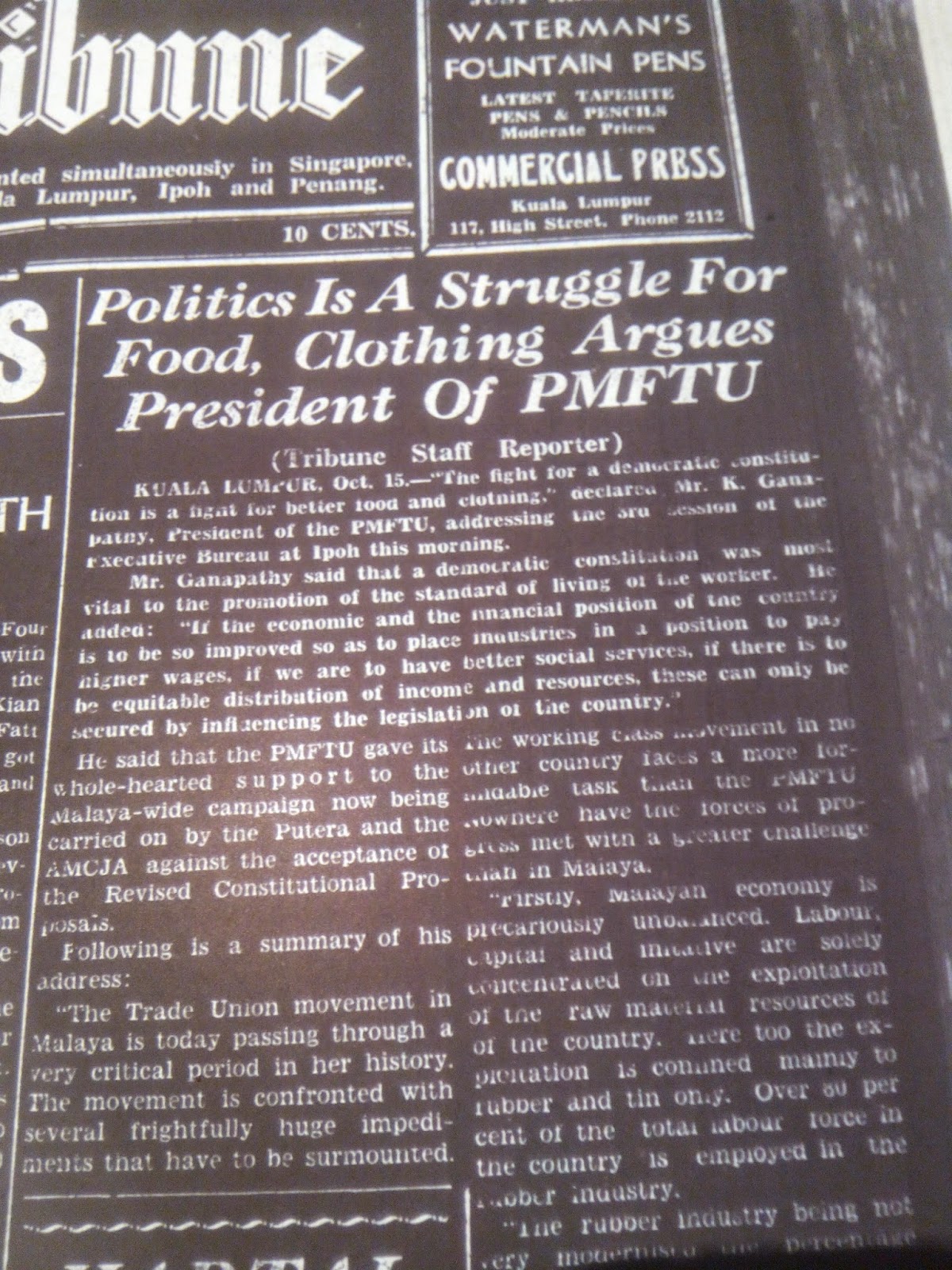 Following is a summary of his address:

“The Trade Union movement in Malaya is today passing through a very critical period in her history. The movement is confronted with several frightfully huge impediments that have to surmounted.
The working class movement in no other country faces a more formidable task than the PMFTU. Nowhere have the forces of progress met with a greater challenge than in Malaya.

“Firstly, Malayan economy is precariously unbalanced. Labour capital and initiative are solely concentrated on the exploitation of the raw material resources of the country. Here too the exploitation is confined mainly to rubber and tin only. Over 80 per cent of the total labour force in the country is employed in the rubber industry.

“The rubber industry being not very modernized the percentage of acreage under clonal rubber being only 18, confronted with thread of the synthetic produce. Furthermore when the rehabilitation of the plantation in East Indies starts the rubber market is bound to slump.

“Thus Malaya’s dependence on the rubber has thrown her economy in a precarious condition. But still the Government has not shown any anxiety to take steps to place Malayan economy on a sound basis by working out a plan of balancing economic development.

“Secondly inflation has set in thus causing real wage to shrink the reducing the standard of living of the workers to starvation level.

“The chief causes of inflation have been absence of direct taxation, heavy indirect taxation, lack of an efficient system of price control, and unplanned and extravagant expenditure.

“Thirdly, in no country in the Empire does one find such curtailment of civil liberties as in Malaya. Examples of such curtailment are Societies’ Ordinance, the House to House Collections Ordinance, requirement of 10 days’ notice to the police for calling a mass meeting, trespassing restrictions in the plantation, the Banishment Ordinance etc.

"Fourthly, Malaya has no democratic constitution. In the Revised Constitutional Proposals that have been accepted by His Majesty’s Government there is no provision for elections and no transfer of responsibility to the people.

“If the economy of Malaya is balanced, if the civil liberties are guaranteed and if there is democratic constitution through which the will of the people could influence Legislation it would be much easier to promote the standard of living of the workers and alleviated his sufferings.

“But the impediments will not influence the PMFTU to pause or falter in its determination and efforts to make the lot of the workers a tolerable one.

“Now let me consider the task before us

“Though the government makes pious declaration of promoting trade unionism in Malaya yet its action are the contrary. The Trade Union Ordinance provides that Government workers shall not combine with non-government workers. The workers belong to a single class. In this class there can be no radical, national or any other barriers. For the healthy democratic development of any country it is essential that the workers should be united. But here the Government foster a division. This division cannot but be meant to weaken the trade union movement in the country and curtain its achievements. The working class must strongly resist such attempts to divide them. The Government workers and the PMFTU should work for the repeal of this provision in the Trade Union Ordnance.

“Another impediment to the development of trade unionism in Malaya is the trespass law in the plantations. The law keeps nearly 80 percent of the working class movement in the country in state of impotency. It deprives the state workers his right and dignity as human being and reduces his status to that is a serf. The trespass restrictions is an insult to the working class and a scandal to Malayan people and the Government. The PMFTU and the entire working class movement of this country should ceaselessly work for the lifting of these restrictions. The lifting of these restriction are essential to lay stable foundations to the development of democracy in Malaya.

“There is another move by the Government to weaken the trade union movement. That is by fostering docile unions.  But this is a minor matter. We would advise the Government that docile unions are not practical proposition. The legitimate interests of the workers are bound to class with the docility of the union and then the leader or leaders who promote such docility will betray and this destroy himself or themselves.

“Another vital problem that engages the urgent attention of the working class is the question of a minimum wage. The Wages Commission did not attempt to tackle this problem.

“Today when real wages have shrunken to an alarmingly low level at a time when the working class is awakening in realize their rights the fixing of a minimum wage is now vital for the quick rehabilitation of the country.

“I stress most strongly the needs for fixing a minimum wage because it is vital for the preservation of law and order in Malaya.

His Excellency the Governor in his talk over Radio Malaya pointed out,
“The state of crime whether serious crime or petty, is generally found to have some relation with employment.” But His Excellency went on to say there was full employment in Malaya. Then what is the economic cause for the rise in crime except the inadequate in wages. I wonder why His Excellency did not push his argument to its logical conclusion.

“Here I wish to express the support of the PMFTU to the demand made for the PMCGW. Their demand for a minimum wage is much below the minimum cost of living. We refuse to believe that the finances of the Government cannot be so adjusted to meet their demands.

“Finally there is the struggle for a democratic constitution. The Putera and AMCJA  have launched a Malaya-wide campaign against the acceptance of the Revised Constitution Proposals. We give our wholehearted support to the campaign.

“A democratic constitution is most vital to the struggle for the improvement of our standard of living. If the economic and financial situation of the country is to be so improved so as to place industries in a position to pay higher wages, if we are to have better social services, if there is to be equitable distribution of income these can only be secured by influencing legislation in the country. This cannot be done without a democratic constitution through which the will of the people can be expressed.

“Therefore the fight for a democratic constitution is a fight for better food and clothing.

“I appeal to the workers throughout Malaya to remain united and to be prepared for sacrifices. Nothing can be achieved without suffering, without tears and sweat.

“Workers of Malaya do not flinch or falter from the path to your goal just because the forces against you are temporary powerful and under great advantage. The only power that carries you alone on your path to your goal is hunger! That is a powerful force. It is powerful enough to blast everything before it. Furthermore, history is on your side. So dear comrades march on and stop not till your goal is reached.
Posted by Saminathan Munisamy at April 27, 2015 2 comments: