The fair treatment given to labourers in estate nowadays did not materialized from sincere empathy of planters (estate owners) towards the hardship faced by the labourers, but from determined struggles manifested through work stoppage, disobedience and protest staged by labourers.

In the early stage, the labourers seems to be successful in getting the planters to agree to their terms and conditions. Many labour struggles which saw intervention of Repsentative of the Government of India - S.K Chettur seemed to materialize aspiration of the workers. One of the incidents were reported in The Straits Times on the successful labour strike organised on Dublin and Havard estates in Kedah under leadership of A. M Samy.

The Straits Times on the 2nd September 1946 reported that S.K Chettur settled strikes staged on Dublin Estate, Kulim and Havard Estate in Sungai Petani. A number of 3000 thousands workers reported had returned to work after the British Planter agreed with the terms and conditions.

1. An addition of two gantangs (12 katis approximately 7.3kgs) of rice shall be given per month to labourers on top of their usual ration.

2. Rubber tappers will be paid a bonus of 10 cents over  per pound over 20 pounds of dry rubber brought in daily and if work is properly done they will receive a minimum bonus of 20 cents a day.

3. Overtime work 2 pm to 5 pm will be paid for at the raid of 55 cents for male adults and 48 cents for female adults.

4. On rainy days, if work is stopped during morning, the workers will be paid half-a-day salary and will get full pay if stopped at 9 am.

5. Women will be granted maternity leave for two months - one month before and one moth after giving birth will maternity allowance of $22.80 per month.

6. Payment in respect to due in December 1941 will be made within a period of resumption of work.

7. No labourers will be stopped from work without sound reasons.

But these did not last long as the planters realized in long run that they will lose out to estate labourers and slowly realized that the workers were being aware of their rights.

It is noticed here that overdue salary issues (salary withheld by estates owners prior to World War II) highlighted in the demand. Most estate owners refused or evaded from the responsibility settling overdue salary which they owned to the labourers. Excuses were put on poor global economic due to war. But in reality rubber prices sky-rocketed as demand was high from US war industry.

Posted by Saminathan Munisamy at December 18, 2015 No comments:

With regards to investigation into Kedah Riot in 1947, Representative of the Government of India, S.K Chettur demanded a public inquiry to be held, reported The Straits Times - 15th March 1947. Chettur was very critical in his views against police using excessive force in handling the situation.
The daily also reported that Chettur declined to comment on allegation of disruptive elements were responsible for the disturbance and the organiser of the Kedah Indian Estate Labourers and Kedah Federation of Trade Union Vice President, A.M Samy was just mere a tool of these elements. Chettur also commented that the proposed inquiry shall expected to decide whether this disturbance sprang from legitimate aspiration of labourers or from agitation sponsored for ulterior motive. 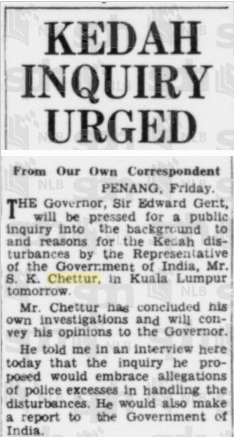 Posted by Saminathan Munisamy at December 16, 2015 No comments:

As my quest to find the names of those involved in one of the most vigorous rebellious acts against oppressive British masters in Kedah, a few names appeared in The Straits Times dated 22nd April 1947.

The President of Sungai Petani Estate Workers Union, Govindaraju, faced charges of intimidation and wrongful confinement of an Indian named Ayaroo. In his defend, Gavindaraju told the court that he was not at the estate when the incident took place. Ayaroo, was said to be taken away by the three accused and tied to a post for four hours and guarded by 15 members of "youth corp" - Thondar Padai. Apparently, Ayaroo was not happy that the workers formed an union.

Charged with Govindaraju were Kuppusamy and Muthiah (a Hindu priest) and two women. ( I discovered that the names of these two women were Annathaai and Manidammal - http://www.malayaganapathy.com/2016/10/kedah-riot-1947-indian-women-labourer.html) 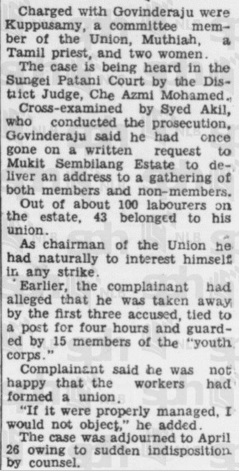 As Thondar Padai's foremost activity (which upset the British the most) was demolishing toddy shops in estates, it is quite normal Thondar Padai members and its leaders to punish those who patronize toddy shops by metered out punishment such as tied to posts or trees. Eventually, this act incited hatred among the older generation who regularly patronize toddy shops. The Straits Times reported on the 18th March 1947, that complaints have been made against some individuals connected to Thondar Padai movement. Labourers from many estates around Sungai Petani made police reports for intimidation and threatened for drinking toddy. Thirteen men and three women have been already charged in Sungai Petani magistrate court for intimidation. 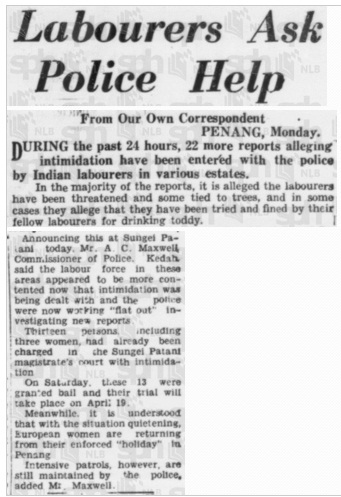 Posted by Saminathan Munisamy at December 15, 2015 No comments:

Accused in Ganapathy torture case, Ex-Inspector K.Vadivellu Pillai were given two months of imprisonment for his two counts of relating to hurt. 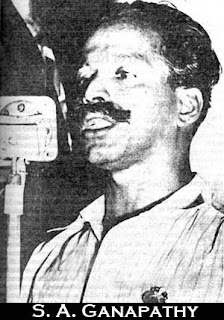 The Straits Times dated 5th July 1946 reported that Vellu Pillai was sentenced to two months of imprisonment after taking into consideration that former was in custody for nine months.
Justice Workey also noted that K.Vadivellu Pillai served as inspector for 21 years with special branch of the Singapore Police. Vellu pleaded guilty to a second charge of voluntarily causing grievous hurt to Ganapathy.
According to Prosecutor R.H Green, Ganapathy was taken to the Central Police Station by Pillai and produced before Japanese Officer Toyoda. Ganapathy was forced to kneel and beaten with leather straps. This was to get Ganapathy to confess that he was a Communist.
A.J Braga who appeared for Pillai, asked the Lordship to consider accused service for 21 years with Straits Settlement Police Force. 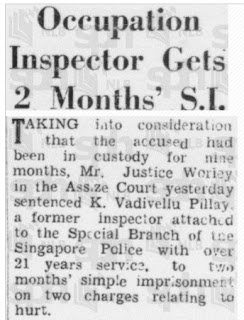 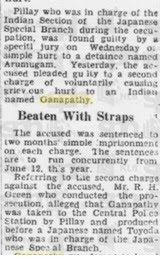 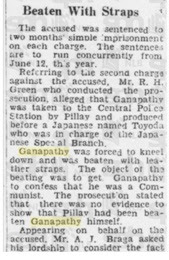 Posted by Saminathan Munisamy at December 03, 2015 No comments:

The Straits Times on the 10th May 1946 reported the Inspector of Indian Section, Vellu Pillai, who responsible to carry out tortures towards Ganapathy was committed to stand trial at the Assizes on three counts of abetment in voluntary causing grievous hurt, causing grievous hurt and causing hurt by H. A Forrer, District Judge and Magistrate, in the Seventh Police Court.

It also reported that preliminary inquiry into tentative murder charge against the same person shall start on the 10th May 1942 before Forrer in the Seventh Police Court.

Vellu Pillai was represented by M.J Namazie. Seven detectives and constables who worked under him before and after occupation gave evidence for the prosecution. Many of them were working for Detective Bureau in Robinson Road, Singapore.
On the 3rd July 1946, ST reported that Vellu Pillai had caused the death of a detainee - Arumugam by repeated beating during Japanese occupation. K.Vadivellu Pillai (or in some reports referred as Vellu Pillai) was on trial of murder at the Assizes before Justice Worley with special jury empanelled for the trial.

Outlining the case, the prosecution R.H Green stated that in February 1942, Pillai worked for the Japanese as Head of the Indian section. In March 1942, Pillai was instrumental in the arrest of some suspected Communists. Among them was Ganapathy, Letchumanan and Arumugam.

According to Prof. Suba Veerapandian, Letchumanan had took part in Anti-Hindi Agitation in Tamil Nadu under E.V Ramasamy of Justice Party in 1937 (video timeline : 13.42)

According to Green, Arumugam was never charged with any offense. He was found dead in police custody and his body was removed in sack.

Pillay accused Arumugam for being a Communist which repeated denied by Arumugam. Pillai ordered a Malay policeman Abdul Hamid to beat him with belt. Hamid obeyed and used the belt lightly, whereafter, Pillay took belt from Hamid gave Arumugam a severe beating. After that Arumugam was allowed to return to his cell. It was only occasion he was able to walk to his cell unassisted. Again on the same day, Arumugam was brought before Pillai who gave another severe beating.

The following day, the process was repeated after which Arumugam was brought before a Japanese officer Toyoda, who used a Kandar stick on Arumugam.

Pillay was accused of beating Arumugam in 16 occasion which resulted Arumugam to die in his cell. His death was reported by his fellow detainees. J. Braga appeared as lawyer for Pillai. 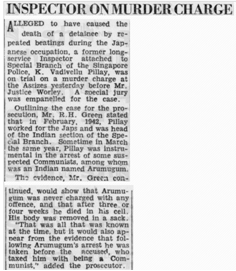 Dwelling further into Arumugam's death incident, ST on the 11th May 1946 reported under heading "Indian Beaten 20 Days Died in Cell" that evidence on Arumugam's death was given in the Seventh Police Court.

The policeman Abdul Hamid who gave evidence against Vellu Pillai told the court that Arumugam was arrested under the instruction by Vellu Pillai, shortly after Japanese occupied Singapore. Vellu wanted Arumugam to admit that he was a Communist. According to Hamid, Arumugam was usually beaten with belt, rottan and kandar stick. Vellu would beat Arumugam with belt and rottan and eventually sent him to Toyoda who then beat Arumugam with kandar stick. Hamid would carry back Arumugam to his cell unconscious after each beating session which terminated in Toyoda's room. At end of first week, Arumugam's back became raw and his health deteriorated. The following week Arumugam's health deteriorated that he crawled or had to be assisted when he wanted to move.

Hamid continued that Arumugam never confessed that he was a Communist. Arumugam died about a week after he was given last beating. The body was put in a sack which was sewn up and taken away.

The inquiry against Vellu Pillai was being conducted by Lt. Col. W. Totman before H.A Forrer while M.J Namazie for the defence. 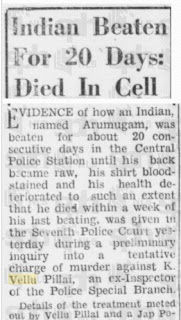 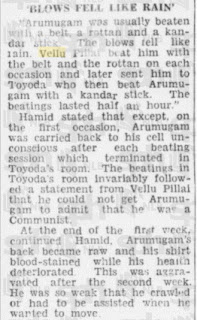 Posted by Saminathan Munisamy at December 02, 2015 No comments: