...The decision to execute this man has been universally condemned and Pandit Nehru himself, at press conference yesterday, criticised the action of the Malayan authorities - Sir Archibald Edward Nye- UK High Commissioner in India


Sir Archibald Edward Nye who was serving as the UK High Commissioner to India from 1948 to 1952 wrote this telegram to the Secretary of State for Commonwealth Relation Office, Philip Noel- Baker, in London after meeting Girija Shankar Bajpai , who was a principal foreign affairs adviser to Nehru and also the first Secretary General in the Ministry of External Affairs. Outbreak of the news that Ganapathy's was hanged despite India made her representation through Indian Representation to Malaya, John Thivy, angered many Indian politicians including Nehru who regards British administration in Malaya has acted "folly".
Clearly, it stated India's dissatisfaction for being kept in dark over the development of Ganapathy's case. India seemed to be not convinced with British claimed that they had no jurisdiction over the executive decision in Malaya over execute Ganapathy. India felt that British government should have done more in Ganapathy's case. India's agitation also an attempt to save Sambasivam, another Indian waiting to be hanged in Malaya. The High Commissioner made it clear unless there is any interference from the British government, the Commonwealth will not interfere with the competent authority in Malaya even though Sambasivam to be executed.


To avoid further clashes with India, the High Commissioner recommended that India Government to be well informed in the case of Sambasivam. And statement should be issued in London to set forth the facts of Sambasivam's case so that the Indian press would have the British version of the case.
But certainly, it is clear that John Thivy, the Indian Government Representative to Malaya was treated "in a offhand manner".

Why Thivy was treated as such? I am assuming there should be some kind of correspondences with Indian Government - Krishna Menon in particular. So, what were transpired between Thivy and Krishna Menon?

Surely Malayan British government's attitude in Ganapathy's case alerted the Indian Government and this may have saved Sambasivam from the noose.

A brief note of Sambasivam
Sambasivam was a clerk of Rubber Worker Union Segamat in Johor. He was arrested on the 13th September 1948. At the time of his arrest he was in the company of two Chinese who were armed. Three Malays who were armed with knives (parangs) tried to arrest him and it was reported Sambasivam was wounded in the fight. One of the two Chinese was killed and other escaped. A revolver and ammunition found on Sambasivam during his arrest. Due to his injuries he was hospitalised for more than 5 months and was discharged on 28th February 1949.
Sambasivam was tried at the Johor Bahru High Court on the 2nd and 3rd March 1949 for unlawfully carrying arms. The assessors found him not guilty but the trial judge disagreed and orders a retrial.
A retrial took place on 22nd March 1949 when he was convicted by both assessors (a Malay and an Indian) who found Sambasivam was guilty and sentenced to death. Sambasivam further appeal at the Court of Appeal.
The court of Appeal dismissed his appeal on 28th April 1948. All the three Appeal Judge (including the Chief Justice) agreed with the Trial Judge. He was sentenced to death. The execution was scheduled to take place on the 4th June 1949. But John Thivy took enormous efforts to save Sambasivam’s life by pursuing Sambasivam in person to sign the application for leave to appeal to the Privy Council on the 3rd of June 1949 - a day before his scheduled execution.
Eventually Sambasivam was found not guilty by the Privy Council and he was released and deported to India.
(Note: Sambasivam - Photo Courtesy Annamalai Sundara Murthy - Maaveran Malaya Ganapathy) 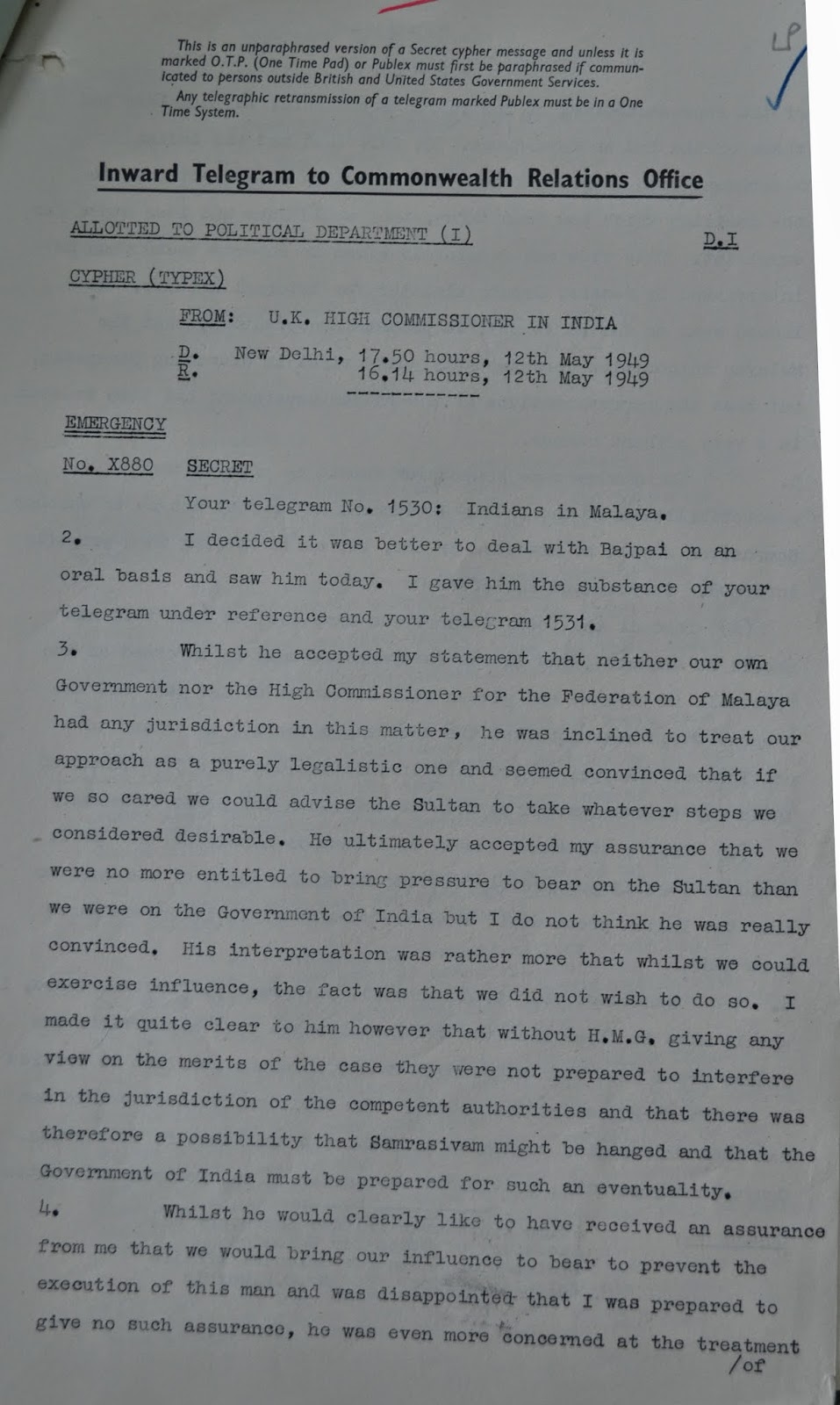 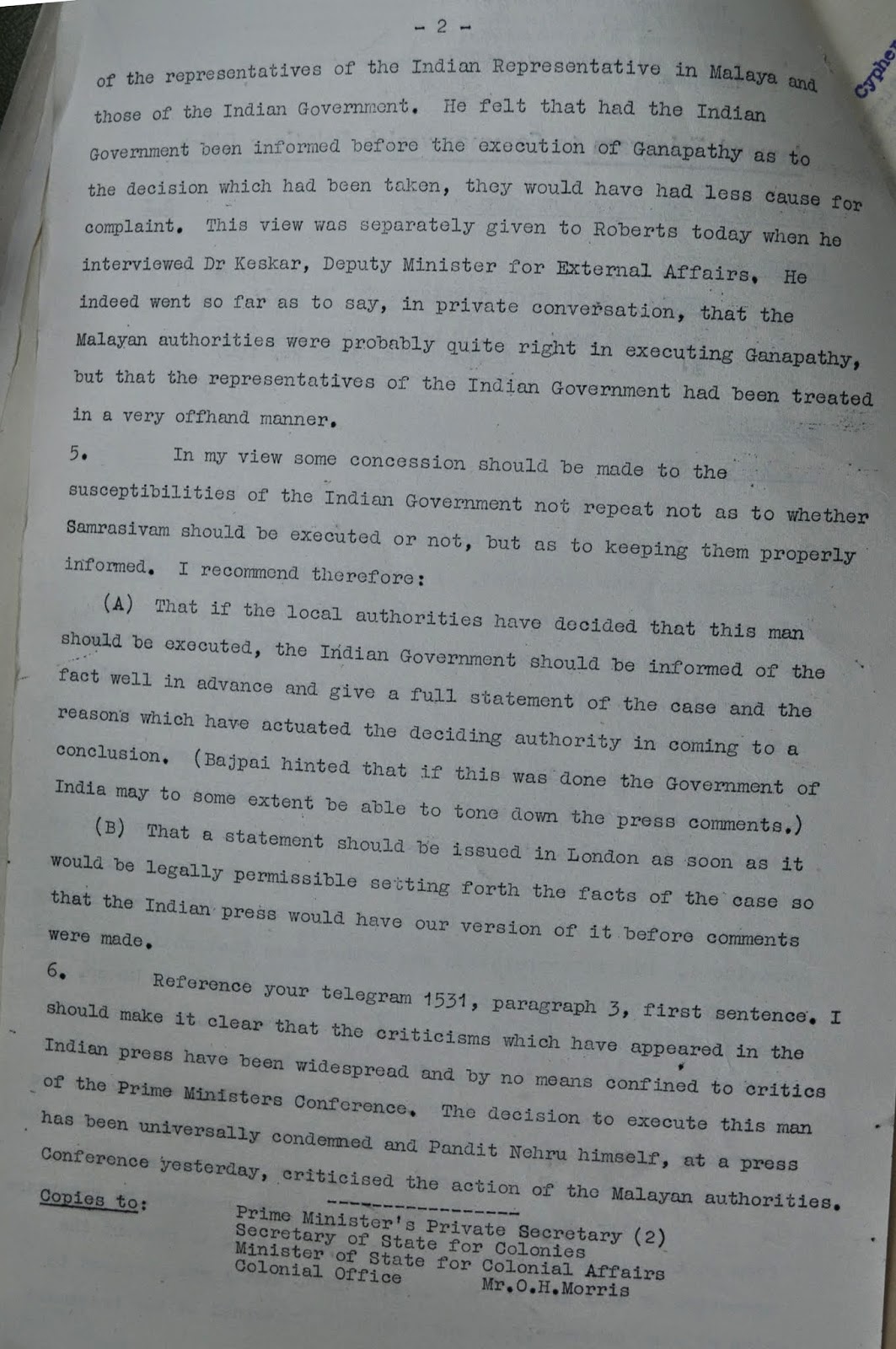 FROM: U.K HIGH COMMISSIONER IN INDIA

Your telegram No.1530: Indians in Malaya

2. I decided it was better to deal with Bajpai on an oral basis and saw him today. I gave him the substance of your telegram under reference and your telegram 1531.

3. Whilst he accepted my statement that neither our on Government nor high Commissioner for the Federation of Malaya had any jurisdiction in this matter, he was inclined to treat our approach as purely legalistic one and seemed convinced that if we so care we could advise the Sultan to take whatever steps we consider desirable. He ultimately accepted my assurance that we were no more entitled to bring pressure to bear on the Sultan that we were on the Government of India but I do not think he was really convinced. His interpretation was rather more that whilst we could exercise influence, the fact was that we did not wish to do so. I made it quite clear to him however that without H.M.G giving many view on the merits of the case they were not prepared to interfere in the jurisdiction of the competent authorities and that there was therefore a possibility that Sambasivam might he hanged and that the Government of India must be prepared for such an eventuality.

4. Whilst he would clearly like to have received an assurance from me that we would bring influence to bear to prevent that execution of this man and was disappointed that I was prepared to give no such assurance, he was even more concerned at the treatment of the representative of the Indian Representative in Malaya and those of the Indian Government. He felt that had the Indian Government been informed before the execution of Ganapathy as to the decision which had been taken, they would have had less cause for complaint. This view was separately given to Roberts today when he interviewed Dr. Keskar, Deputy Minister for External Affairs. He indeed went so far as to say, in private conversation, that the Malayan authorities were probably quite right in executing Ganapathy, but that the representatives of the Indian Government had been treated in a very offhand manner.

5. In my view some concession should be made to the susceptibilities of the Indian Government not repeat not as to whether Sambasivam should be executed or not, but as to keeping them properly informed. I recommend therefore;

(A) That if the local authorities have decided that this man should be executed, the Indian Government should be informed of the fact well in advance and give a full statement of the case and the reasons which have actuated the deciding authority in coming to a conclusion. (Bajpai hinted that if this was done the government of India may to some extent be able to tone down the press comments.)

(B) That a statement should be issued in London as soon as it would be legally permissible setting forth the facts of the case so that the Indian press would have our version of it before comments were made.

6. Reference your telegram 1531, paragraph 3, first sentence. I should make it clear that the criticisms which have appeared in the Indian press have been widespread and by no means confined to critics of the Prime ministers Conference. The decision to execute this man has been universally condemned and Pandit Nehru himself, at press conference yesterday, criticised the action of the Malayan authorities.