India Failed to Save Ganapathy - My Hypothesis

In another portion of documents which I received from Public Record Office in London, (thanks to Dr. Goeff Wade for retrieving these documents for my research) a letter written by O.H Morris from the Colonial Office dated 5th May 1949 to J.P Gibson of Commonwealth Relation Office on execution of Ganapathy.

Information stated in detail on request by Government of India for a stay of execution through Lord Listowel, which was communicated to Gurney at the wee hours of 4th May 1949. Colonial Office aware that Government of India may go public on this information and this shall have repercussions on British-India relationship especially as India was a very prominent member in the Commonwealth.

The letter basically advised the Commonwealth Relation Office on the general line - constitutional agreement, that he should take in answering any inquiries related to execution of Ganapathy?

(Sorry for the fine print of the letter, see the re-typed portion below)

After going through this letter, these questions raised in my mind:

1. Why the Government of India failed to make a formal representation at the beginning of the case? It is stated that the representation was made officially through London on the 26th March 1949 - ten days after Ganapathy has been sentenced to death!

2. Why the request of Government of India for stay of execution was only done on the afternoon of 3rd May 1949?

3. Why the representation by the Government of India through London failed to convince the Sultan to exercise his prerogative?

4. Why John Thivy, a lawyer also an ex INA officer (founder of MIC) who represented Government India in Ganapathy's case failed to act swiftly? Too much of trusting the British?

India has forsaken Ganapathy and failed to save him . There are three major flaws:

1. Government of India failed to make a formal representation at the begging of the case.

2. Krishna Menon, the High Commissioner of India to UK, asked for a stay of execution on the afternoon of 3rd May 1949, less than 24 hours before execution of Ganapathy.

3. Representative of Government of India in Malaya, Thivy, failed to exercise the option of engaging Privy Council as he has done later in Sambasivam's case.

Until further evidence to be surfaced, I shall stand by this hypothesis. 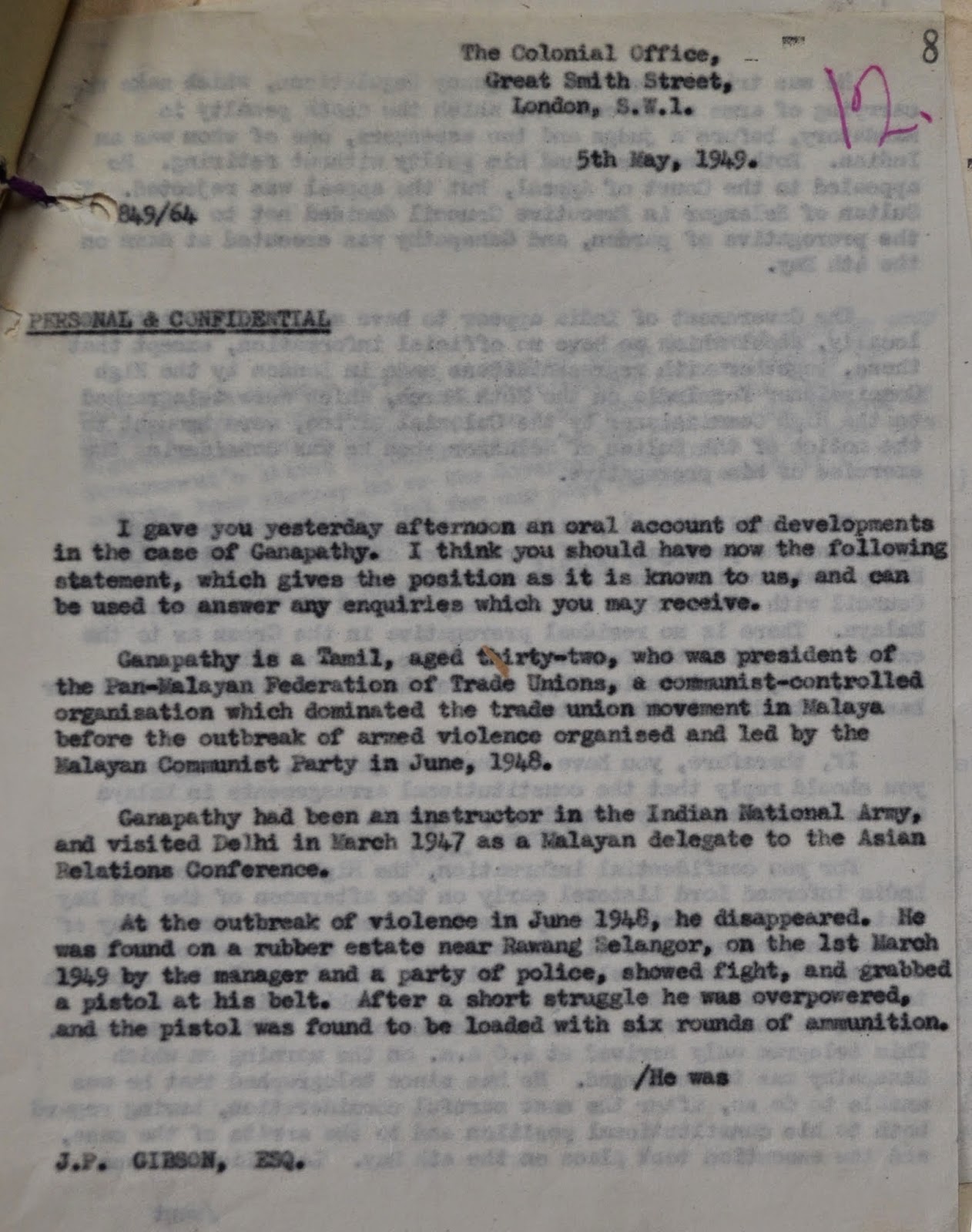 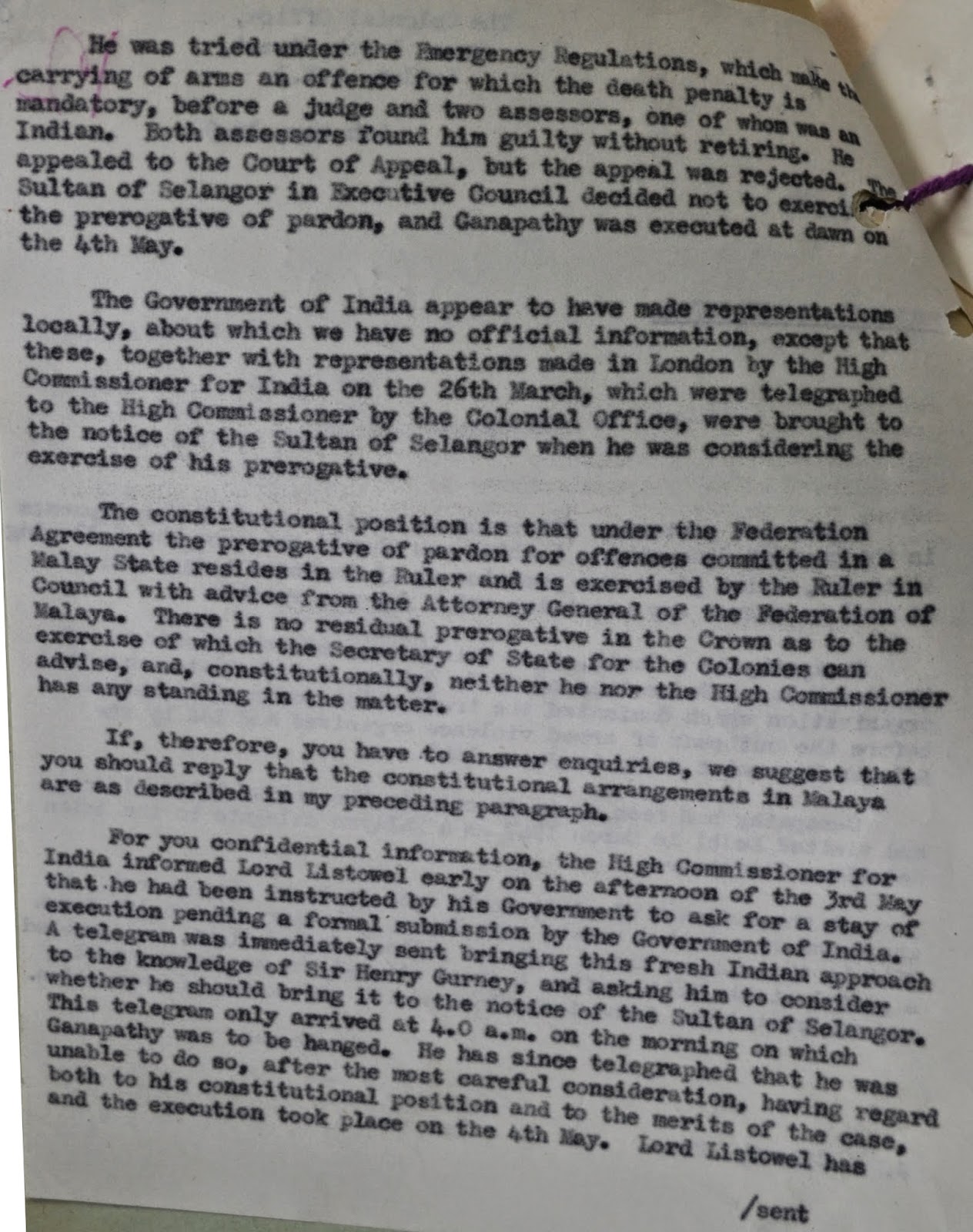 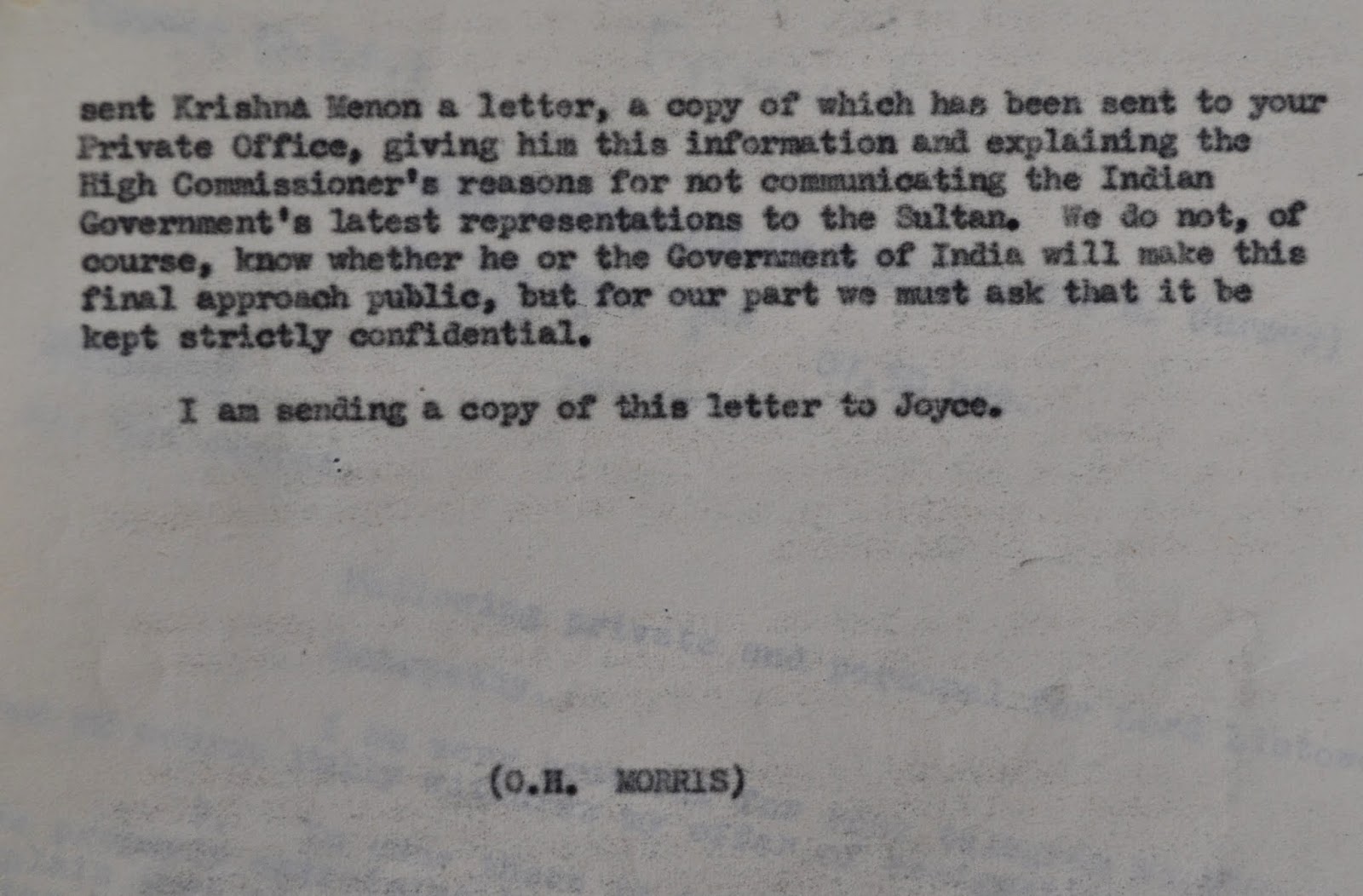 I gave you yesterday afternoon an oral account of developments in the cased of Ganapathy. I think you should have now the following statement, which gives the position as it is known to us, and can be used to answer enquiries which you may receive.

Ganapathy is a Tamil, aged thirty-two, who was president of the Pan-Malayan Federation of Trade Unions, a communist-controlled organization which dominated the trade union movement in Malaya before the outbreak of armed violence organised and led by the Malayan Communist Party in June, 1948.

Ganapathy had been an instructor in the Indian National Army, and visited Delhi in March 1947 as a Malayan delegate to the Asian Relations Conference.

At the outbreak of the violence in June 1948, he disappeared. He was found on a rubber estate near Rawang Selangor, on the 1st March 1949 by the manager and a party of police, showed fight, and grabbed a pistol at his belt. After a short struggle he was overpowered, and pistol was found to be loaded with six rounds of ammunition.

He was tried under the Emergency Regulations, which make carrying of rams an offence for which the death penalty is mandatory, before a judge and two assessors, one of whom was an Indian. Both assessors found him guilty without retiring. He appealed to the Court of Appeal, but the appeal was rejected. The Sultan of Selangor in Executive Council decided not to exercise the prerogative of pardon, and Ganapathy was executed at down on the 4th May.

The Government of Indian appear to have made representations locally, about which no official information, except that these, together with representations made in London by High Commissioner for India on the 26th March, which were telegraphed to the High Commissioner by the Colonial Office, were brought to the notice of the Sultan of Selangor when he was considering the exercise of his prerogative.

The constitutional position is that under the Federation Agreement the prerogative of pardon for offences committed in a Malay State resides in the Ruler and is exercised by the Ruler in Council with advice from the Attorney General of the Federation of Malaya. There is no residual prerogative in the Crown as to the exercise of which the Secretary of States for the Colonies can advise, and, constitutionally, neither he nor the High Commissioner has any standing in the matter.

If, therefore, you have to answer enquiries, we suggest that you should reply that the constitutional arrangements in Malaya are as described in my preceding paragraph.

For you confidential information, the High Commissioner for India informed Lord Listowel early on the afternoon of the 3rd May that he had been instructed by his Government to ask for a stay of execution pending a formal submission by the Government of Indian. A telegram was immediately sent bringing this fresh Indian approach to the knowledge of Sir Henry Gurney, and asking him to consider whether he should bring it to the notice of the Sultan of Selangor. This telegram only arrived at 4.0 a.m. on the morning on which Ganapathy was to be hanged. He has since telegraphed that he was unable to do so, after the most careful consideration, having regard both to his constitutional position and to the merits of the case and the execution took place on the 4th May. Lord Listowel has sent Krishna Menon a letter, a copy of which has been sent to your Private Office, giving him this information and explaining the High Commissioner’s reason for not communicating the Indian Government’s latest representations to the Sultan. We do not, of course, know whether he the Government of India will make this final approach public, but for our part we must ask that it be kept strictly confidential.

I am sending a copy of this letter to Joyce.