As PMFTU teamed up with AMCJA-PUTERA alliance to push of independence of Malaya, it is important to observe reports which been reported in local daily mails on HARTAL and its impact towards the British's Malayan Union. The Straits Times dated 21st October stated that most of rubber estates and tin mines in Selangor were not operating.

In Batu Arang, over 2000 labourers reported had told their management that they would not turn up for work. Port Swettenham was crippled. Ships were docked and cargoes were not able to be moved due to lack of manpower. Interesting to know that the men had many reasons for not working as the press would like to portray that the organiser of the HARTAL had deceived the real meaning of HARTAL. The government employees seemed to be royal to their masters.

Getting food seemed to be a problem in town, where the Chinese business men closed their business and even the black market hawkers in Petaling Street supported the HARTAL unlike the Indian Muslim eating shops owners.

The Mail Mail was the only local English press to publish their newspaper in Kuala Lumpur even though some of their printing staff “felt bound to obey an order from their union not to work though none had expressed a desire voluntarily to absent themselves in observance of the hartal.”

The Selangor Indian Chamber of Commerce supported the HARTAL by closing their shops as the Indians were not engaged in the Revised Constitutional Proposal which to be tabled and debated.

In Selangor, every rubber estate contacted by the Straits Times said that Indian and Chinese labourers were not tapping.

Tin dredges were idle and on some tin mines only essential work was being done.
The state was dominated by fear. Opinion among most small tradesmen, both in countryside and in Kuala Lumpur, was that retribution for “breaking” the hartal would not be immediate but would be sudden and damaging both to person and property.

At Batu Arang, the main coalfield Malayan Collieries reported that over 2000 labourers had taken a holiday after having previously informed the management of their intention.

At Port Swettenham, principal port for Central Malaya, the absence of 200 stevedores and 700 shore workmen saw no handling of cargo on the five ocean going ships.

In one ship, the Kamuning, 2800 tons of rice were waiting to be discharged.

The Russian ship, the Admiral Ushikov, is waiting to be loaded with 1500 tons of rubber.

An American vessel, the Alphamooi, would have left with 208 tons of latex but the hold-up in labour.

General cargoes were to be discharged at from the Lycaon and Diomedes.

In addition, the absence of labour at Port Swettenham meant delay in unloading of 80 wagon-loads of rubber from the interior for foreign ports.

The complete ignorance of the meaning of hartal was never better illustrated than by the news of a responsible observer in Port Swettenham, who in the course of ten minutes was given three different answers by three men for not working today.

The answers were – “It is a public holiday,” “It is Princess Elizabeth’s wedding day” and “It is in protest against income tax.”

In Kuala Lumpur very nearly all Government employees, both daily-paid and monthly wage earners, reported for duty and P.W.D., however and essential services were able to call it a normal day

Indian Muslim eating shops defied the “hartal” order and reaped a harvest, while the Malay market in Kampong Bahru was packed with people at all hours.

The fear of intimidation extended even to itinerant black market hawkers in the Petaling Street area, for not single one was “on parade” with the usual pile of cigarettes, milk and tinned goods.


Bakeries were closed, the Singapore Cold Storage was devoid of nearly all its assistants and on duty with Mr.W.Y Semple, the manager, were his wife and daughter.

The Malay Mail was the only local English-language newspaper to be published in Kuala Lumpur yesterday, but it came out in attenuated form owing the facts, it said, that some men of the printing staff had “felt bound to obey an order from their union not to work though none had expressed a desire voluntarily to absent themselves in observance of the hartal.”

The Strait Times was the only morning newspaper on sale yesterday morning.

All the news vendors and news agent collected their consignments of the Straits Times and delivered them to subscribers and customers.

The Selangor Indian Chamber of Commerce, after a debate on which it was urged that the constitutional question was no concern of Indians, decided that “in order that the peace of Kuala Lumpur shall not be disturbed we Indians who are trading in Selangor, after due deliberation, resolve that all the Indians shops shall be closed.” 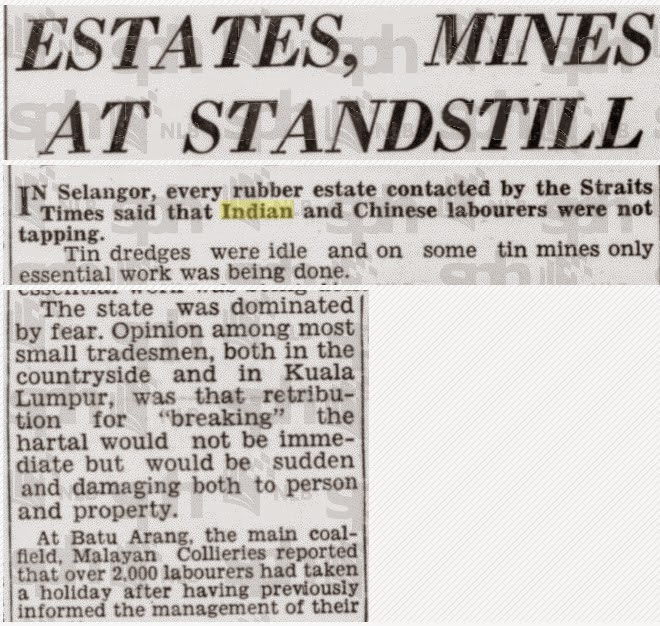 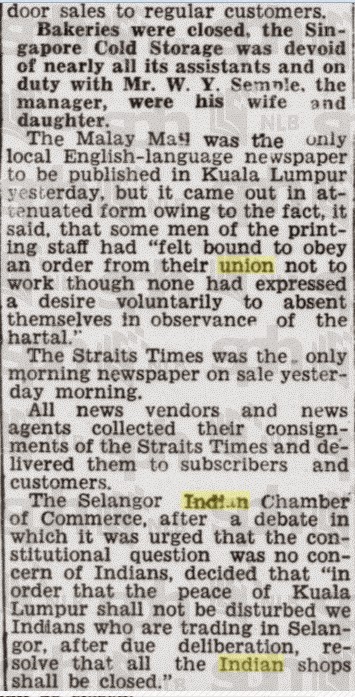 Posted by Saminathan Munisamy at January 15, 2015