Pan Malayan Federation of Trade Union had their last general meeting (3rd General Assembly) on the 5th April 1948 before it was declared defunct in June 1948. Ganapathy was quoted in The Straits Times, as said;

“Trade union missions and labour commissions have become common but, the living and working conditions of labourers are still the same.”

The Singapore MCP representative has indicated that Singapore will be made as an anti communist headquarters in South East Asia.

The Agent of Government of India in Malaya T.G Nataraja Pillai has openly urged trade unions “to agitate for reform in a constitutional manner.”

Interesting to note that "Internationale" was sang during the opening ceremony. Though, I am not sure which language it would have been sung, but I guessing it would be in Malay.


Also we noticed PMFTU received good wishes from the Indonesian Central Organisation Trade Union and the Siamese Labour Unions - a smart move by Ganapathy to forged alliance with regional trade unions with sovereign nations like Indonesia and Thailand.

The Singapore Representative of Malayan Communist Party (Mr. Chang Ming Ching) yesterday said there was “every indication that Singapore may be made the Anti -Communist headquarters in South East Asia”

Mr.Chang was speaking as guest at the opening of the 10-day Third General Assembly of the Pan Malayan Federation of Trade Unions at the Singapore Seamen’s Union in Seah Street, Singapore. He said that the Labour Government instead of leading Malaya towards self-government was leading it towards war.

Lately, a defence department for the Colony has been established under Mr.Hawkins.

“Today, to suggest that Malaya is threatened by foreign aggression is absurd, because any aggression could only come from American imperialism.”

The president of the Pan Malayan Federation of Trade Unions (Mr.S.A Ganapathy) said “Trade union missions and labour commissions have become common but, the living and working conditions of labourers are still the same.”

The Agent of Government of India in Malaya (Mr. T.G Nataraja Pillai) another guess speaker urged trade unions “to agitate for reform in a constitutional manner.”

He said, “Promise little and strive to achieve more.”

More than 100 trade unions representative from all over Malaya attended.

The General Assembly sessions, which will be closed to the press will begin today in the premises of the SFTU in River Valley Road.

Subjects for discussion include all aspects of labour condition in Malaya.

The meeting yesterday received telegrams of good wishes from the Indonesian Central Organisation Trade Union and the Siamese Labour Unions.

Highlight of yesterday’s opening ceremony was playing of the “Internationale.”

Speakers spoke from a platform over which hung two flags, one bearing the sign of the Hammer and Sickle and the other showing 15 stars.

Among the guests were the First Secretary to the Representative of the Government of India (Mr.V.S Swaminathan), the Agent of the Government of India in Malaya (Mr. T.G Nataraja Pillai), the president of the Malay Nationalist Party (Dr. Bhurhanuddin), an unofficial Singapore Legislative Council, Mr.Lim Yew Hock, who is General Secretary of Singapore Clerical and Administrator Workers’ Union and Messrs.Eu Chooi Yip and P.V Sharma of Malayan Democratic Union. 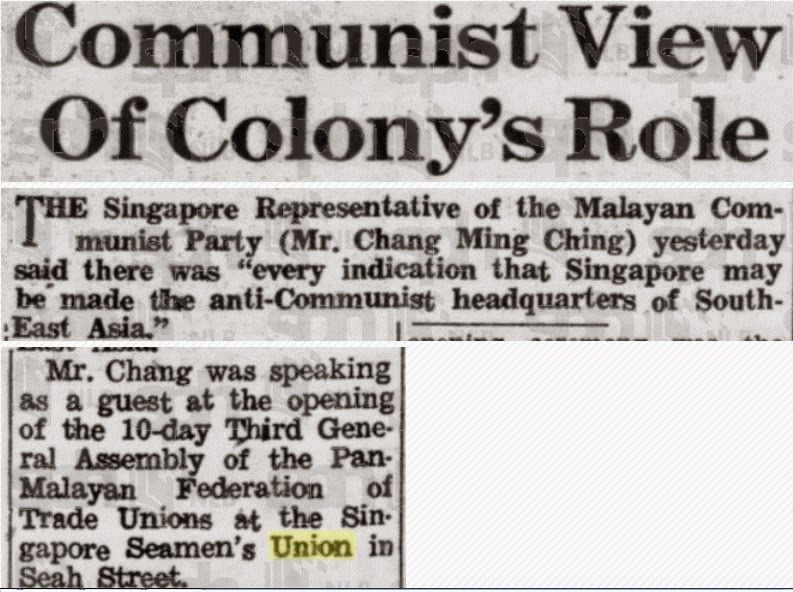 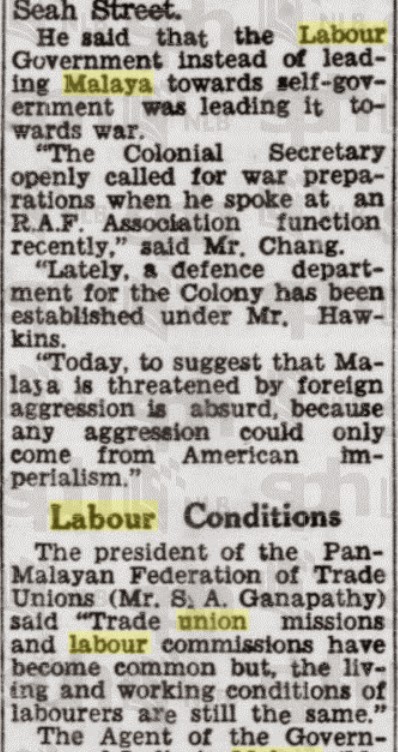 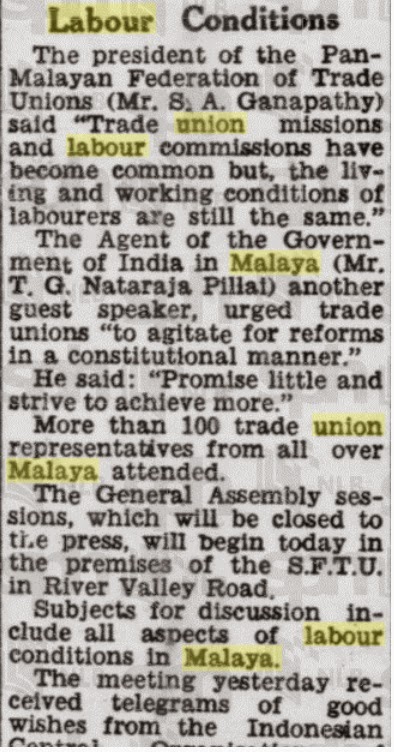 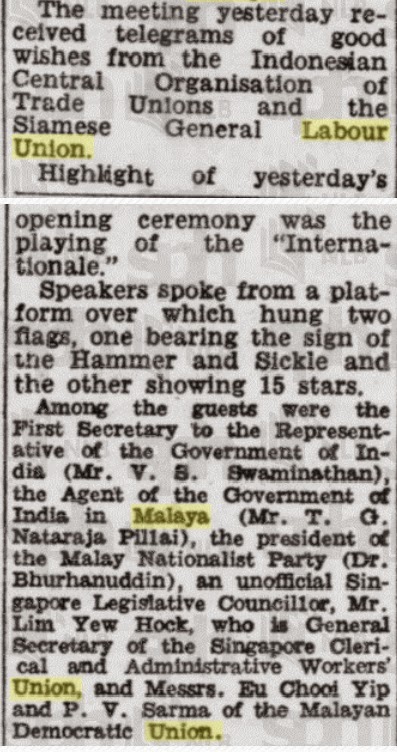 Posted by Saminathan Munisamy at January 22, 2015