The Singapore Mayday parade in 1947 saw almost 50 thousand labourers took part in a procession. The procession was more than a mile and a half long, with men and women on foot and lorries, shouting slogans demanding for more rights and fair treatments for labourers.

The main organiser of the procession was the Singapore Federation of Trade Union (SFTU). The Secretary of SFTU. Lam Swee, had pledged in 1947 that SFTU was planning to hold more bigger rally of 100,000 labourers in 1948 - a number which we would never imagine of , even today!

Fearing of enormous growth of SFTU, the authority has been conducting regular police raids on union offices, arrest of union leaders and encouragement of strike breakers. This prompted the President P.Veerasenan to call for a one day strike involving 74 SFTU's affiliated unions with 50,000 labourers in Singapore.

Being a charismatic young leader, Veerasenan, has been the forerunner of many labour struggles in Singapore. In "The End of British Empire and The Making of Malaya", the author, T.N Harper stated that unlike S.A Ganapathy, Veerasenan was neither a communist nor member of MCP. Many Indian unionists in Malaya were pushed to embrace communist ideology when the Emergency was declared in June 1948. After the declaration of Emergency, Veerasenan fled to Negeri Sembilan to joined the armed struggle of Malayan Races Liberation Army (MRLA) 2nd Regiment for independence of Malaya.

I am proud to present for the first time the emblem of SFTU which took me almost 4 years. The emblem was published in The Straits Times. 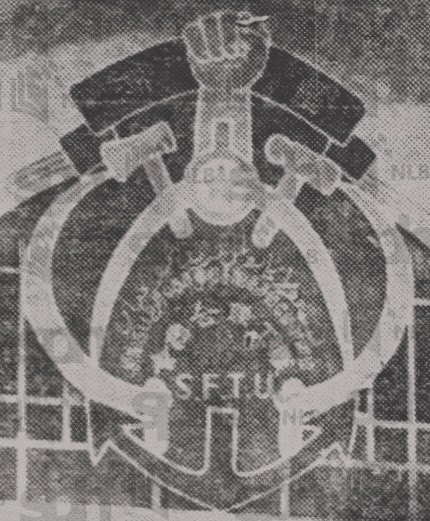 The Emblem of SFTU - Clenched right fist, hammer, an iron mallet, a pair of sickles, an anchor at the bottom edge. A technical angle divider in the center with a star with SFTU in four languages.

The Singapore Federation of Trade Unions would call a 24-hour strike of 74 affiliated unions from 5 am on Friday, the president (Mr.P. Veerasenan) said yesterday.

Mr. Veerasenan said the strike would be in protest against police raids on union offices, arrest of union officials and “police encouragement to strike-breaking.”

Two of the biggest unions affiliated to the SFTU are the Singapore Federation of Municipal Labour Union and the Traction Company Employees’ Union.

The secretary of the SFMLU (Mr.Sundaraju) said yesterday a motion for a general strike would be put on a meeting of the general committee today or tomorrow.

President of the STCFU(Mr.R.K Samy) told the Straits Times yesterday he had not received a request from the SFTU to call a strike but if he received one he would let his men decide for themselves.

The STCFU has more than 1000 members. If they decide to strike 200 buses and 38 trolley busses will be affected.

A stoppage of work is expected in Singapore a week later on May 1, when trade unions observe “Labour Day.”

The SFTU will celebrate with a mass meeting at Farrer Park in the morning and a procession through the town in the afternoon. Last year the procession was more than a mile and a half long. Men and women went on foot and in lorries carrying banners and flags, shouting slogans and playing musical instruction.

May 1 was fixed as “Labour Day” at an international congress of Left –Wing parties in Europe in 1886. Since then it has yearly celebrate by workers throughout the world.

A Government spokesman said last night that so far Labour Day has not been declared a public holiday in Singapore.

He said that labourers in Government employ who stayed away from work on May 1 would be acting against regulations and would thus forfeit the day’s pay.

Any other disciplinary action taken would depend on the terms of contract under they were employed. 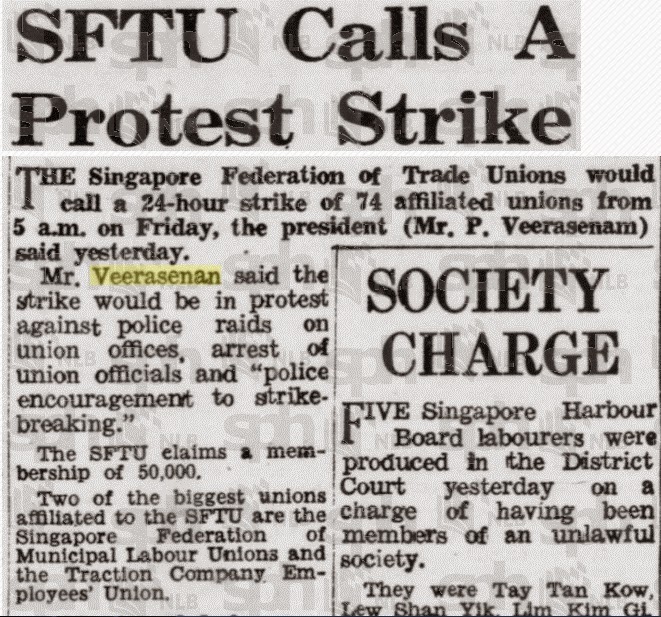 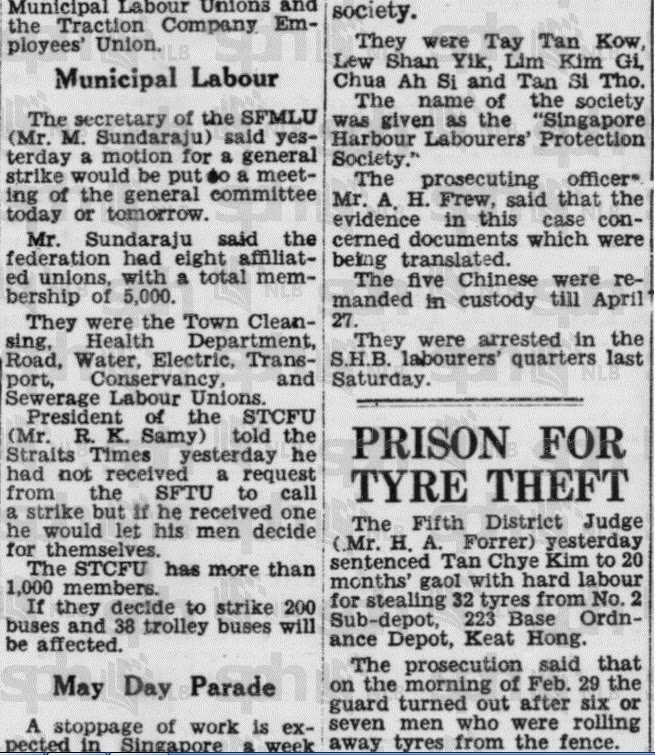 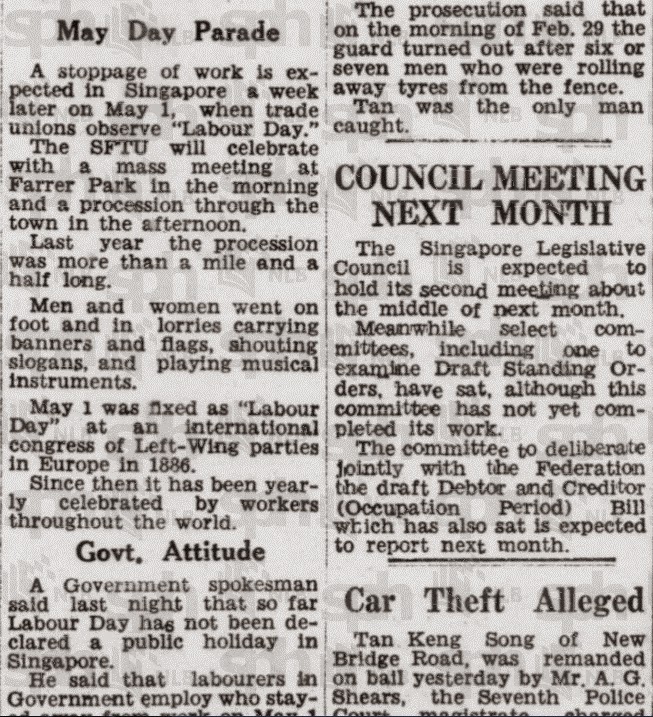 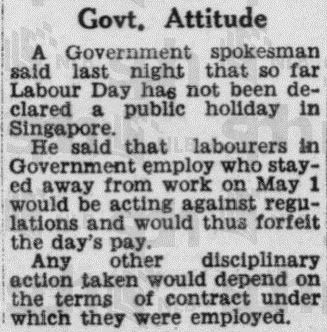 Posted by Saminathan Munisamy at January 21, 2015