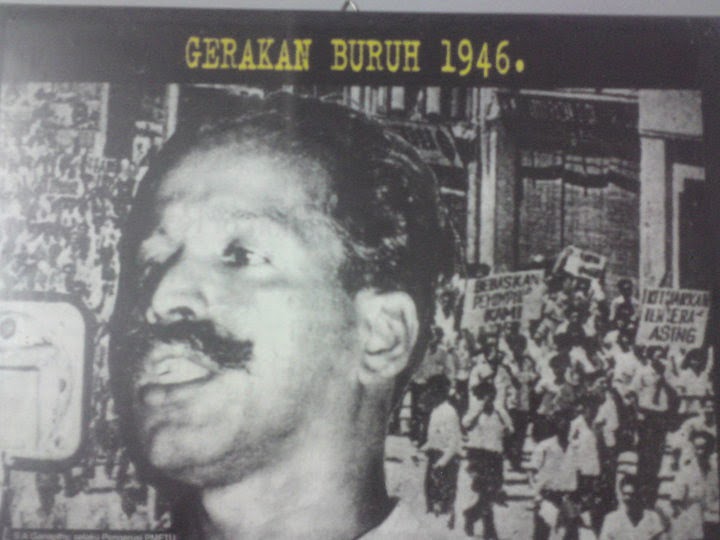 Not many scholars have written on labour unrest in Kedah which was widely known as The 1947 Kedah Riot. Beside Charles Gamba, Dr. Nadaraja Kannan gave us some descriptions of the unrest in his work that appeared in the Journal of the Malaysian History Society, No 24 (1981) pp 94-105 titled “The Thodar Padai Movement of Kedah 1945-1947” ( Dr. Nadaraja Kannan, an associate professor with Faculty of International Studies, Universiti Utara Malaysia).

In his work, Dr Nadaraja had stated that PMFTU was involved in the labour unrest as Ganapathy was reported as had visited most of the estates prior to the unrest.

I strongly criticize that Dr.Nadaraja's work does not justified the labour struggle which occurred on Bukit Sembilan in March 1947. T.N Harper in his book " The Forgotten War - The End of British Asian Empire" justified in detail events that triggered the clash between police and labourers which resulted in 66 labourers arrested. Among them,  3 were women and one of them was pregnant. There was also allegations brought forward by the Representative of Indian Government, Chettur that two of the women including a 15-year-old girl were tortured and raped in police custody. Chettur also requested full inquiry into the investigation which the British government under Edward Gent in Malaya failed to carry out.

The Kedah Riot should remains important as this was one of defying acts staged by Indian labourers against their oppressive British master. In one incident which took place in Bukit Sembilan Estate, where labourers were denied access to clean water, a young dresser lead the struggle against oppressive capitalist by seizing lorry transporting clean water to the estate manager bungalow. Later, this young man was detained and following this a huge strike demanding the release of this man was staged by workers. Estate manager requested the assistance of police to break up the strike. Thus, clash broke between police and workers. The name of the young dresser who lead the strike was Paliyan (பாலையன்)

On Ganapathy's involvement in strikes in Kedah, the Straits Times dated 9th March 1947, reported that “ stream of investigators has been converging to Sungai Petani” and among them were “Union representative whom has been the Chairman of Pan Malayan Federation of Trade Unions, Mr. S.A Ganapathy, who has already visited many estates”

The Governor of Union Malaya, Edward Gent commented on the existence of “influences” opposing to the settlement between management and labourers on two estates – Bukit Sembilan and Sungai Toh Pawang estates as these two estates are still on strikes and these influences were resentful of the recent convictions of rioters in court.

Clearly these "influences" were made reference to PMFTU and Ganapathy as it was reported that Ganapathy has been visiting these estates and meeting held with local PMFTU representative, A.M Samy, prior to the unrest. 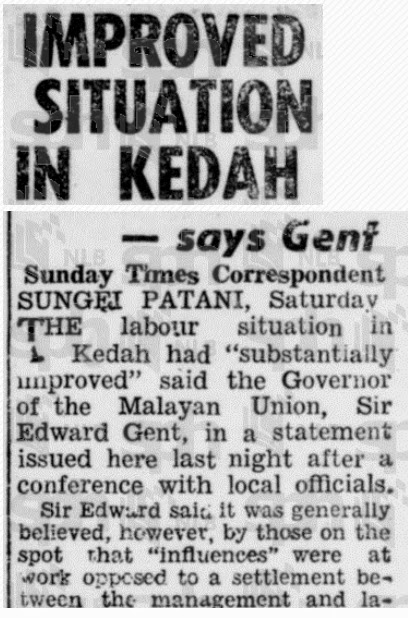 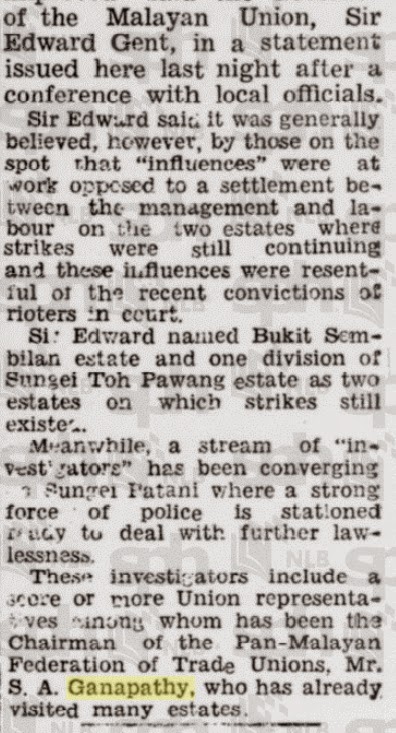 Posted by Saminathan Munisamy at January 28, 2015