Following the arrest of  twelve estate workers who involved in a riot around Kulim and Bedong, a special correspondent of The London Times, Sydney Balhorn, wrote a review of the incident and condition of trade unions in Malaya which reflected well on the thoughts of the British administration in Malaya.

Gist of the article can be summarized as:

2. The government has been taking soft approach towards Pan Malayan Federation of Trade Unions which actively organizing strikes to cripple British administration in Malaya.

3. Trade unions were infiltrated by communist and their ideology. The main perpetrators were the Chinese of Malayan Communist Party.

4. Stern actions against trade unions were not only desired by British officials, planters and Asiatic property owners but also the 90% of Malayan population who wanted British administration to use force to maintain law and order in Malaya.

5. Unless the British administration introduce “vigorous enforcement of the banishment enactment” , Malaya may not able to recover from economic backlash that was seriously inflicted upon it during Japanese occupation.

As any good journalism ethic demand, Sydney Balhorn failed to report fairly on the root cause of the riot and the appalling condition of labourers in estates. The "Thondar Padai" or the Youth Corp was established to eradicate "toddy" shops which operated by state government in estates and towns. The self-styled "Youth Corps" brought revolutionary self-respects reforms among Indians labourers. These reformations threatened the British establishment in Malaya. Thus, efforts were taken to eliminate this movement and British mouth piece like The Straits Times played major roles in tarnishing the image of Thondar Padai by linking and associating it to extremism and communist ideology. 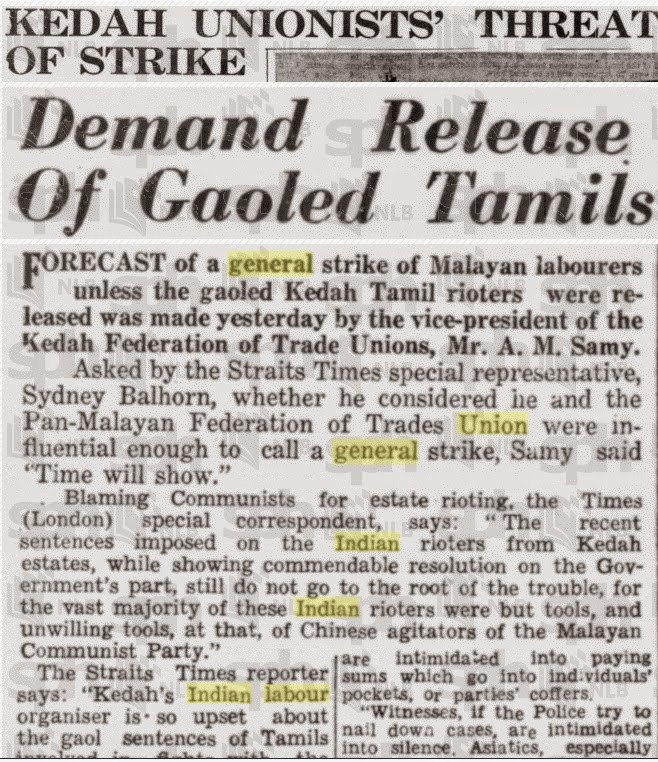 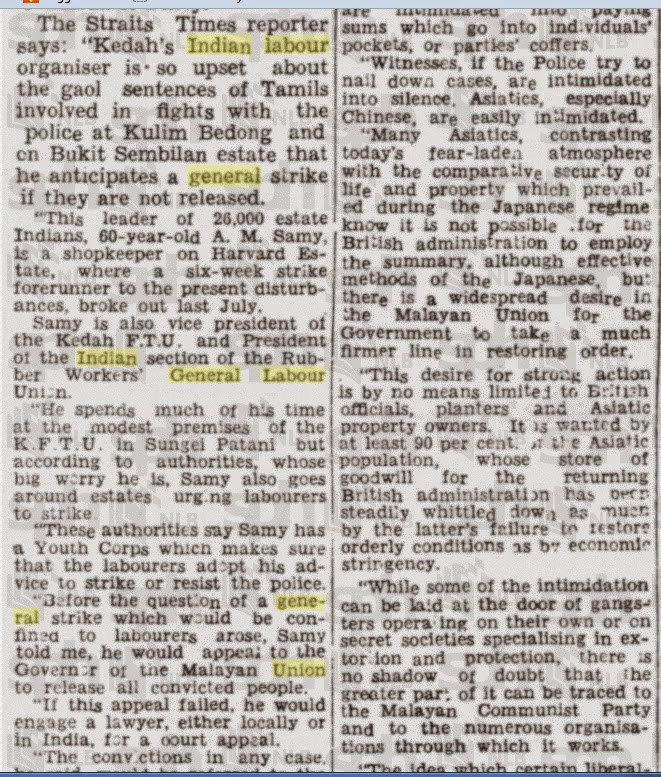 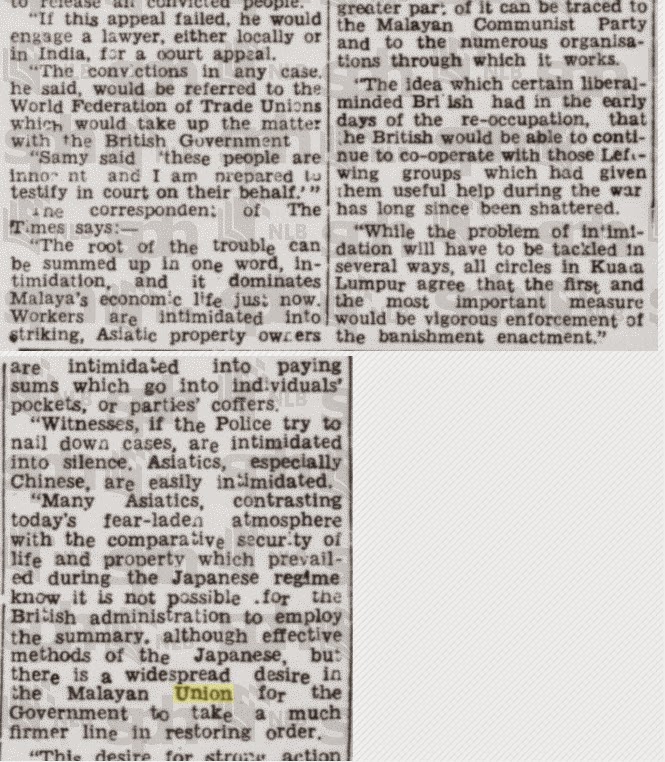 Forecast of the general strike of Malayan labourers unless the gaoled Kedah Tamil rioters were released was made yesterday by the vice-president of Kedah Federation of Trade Unions, Mr. A.M Samy.

Asked by the Straits Times special representative, Sydney Balhorn, whether he considered he and the Pan-Malayan Federation of Trade Union were influential enough to call a general strike, Samy said, “Time will show.”

Blaming communist for estate rioting, the Times (London) special correspondent, says: “the recent sentences imposed on the Indian rioters from Kedah estates, while showing commendable resolution on the Government’s part, still do not go to the roof of the trouble, for the vast majority of these Indians rioters were but tools, and unwilling tools, at that, of Chinese agitators of the Malayan Communist Party.”

The Straits Times reporter says: “Kedah’s Indian labour organizer is so upset about the gaol sentences of Tamil involved in fights with the police at Kulim Bedong and Bukit Sembilan estate that he anticipates a general strike if they are not released.

“This leader of 26,000 Indians, 60-year-old A.M Samy is a shopkeeper on Harvard estate, where a six week strike forerunner to the present disturbances, broke out last July.

Samy is also vise president of Kedah F.T.U and President of Indian section of the Rubber Workers’ General Labour Union.

“He spends much of his tome at the modest premises of the K.F.T.U in Sungai Petani but according to the authorities, whose bid worry he is, Samy also goes around estate urging labourer to strike.

“These authorities say Samy has a Youth Corps which makes sure that the labourers adopt his advice to strike or resist the police.

“Before the question of general strike which would be confined to labourers arose, Samy told me, he would appeal to the Governor of The Malayan Union to release all convicted people.

“If this appeal failed, he would engage a lawyer, either locally or in India, for court appeal.

“The convictions in the any case, he said, would be referred to the World Federation of Trade Unions which would take up the matter which the British Government.

“Samy said ‘these people are innocent and I am preparing to testify in court on their behalf.”

The correspondent of the Times says: “The root cause can be summed up in one word, intimidation, and it dominates Malaya’s economic life just now. Workers are intimidated into striking, Asiatic property owner are intimidated into paying sums which go into individuals’ pocket or parties’ coffers.

“Witnesses, if the Police try to nail down cases, are intimidated into silence. Asiatic, especially Chinese, are easily intimidated.

Many Asiatics, contrasting today fear-laden atmosphere with the comparative security of life and property which prevailed during the Japanese regime known it is not possible for the British Administration to employ the summary, although effective methods of the Japanese, but there is a widespread desire in the Malayan Union for the Government to take a much firmer line in restoring order.

“The desire for the strong action is by no mean limited to British officials, planters and Asiatic property owners. It is wanted by at least 90 percent of the Asiatic population, whose store of the goodwill for the returning British administration has been steadily whittled down as much by latter’s failure to restore orderly conditions as by economic stringency.

“While some of the intimidation can be laid at the door gangsters operating on their own or on secret societies specializing in extortion and protection, there is no shadow of doubt that the greater part of it can be traced to the Malayan Communist Party and to the numerous organization through which it works.

“The idea which certain liberal minded British had in the earlier days of the re-occupation, which the British would be able to continue to co-operate with these left-wing groups which had given them useful help during the war has long since been shattered.

“While the problem of the intimidation will have to tackled in several ways, all circles in Kuala Lumpur agree that the first and the most important measure would be vigorous enforcement of the banishment enactment.”
Posted by Saminathan Munisamy at December 18, 2014