Finally, I managed to find out those names of labourers who were killed during the Klang Strike in 1941.

On 9th May 1941, Rengasamy and Yellumalle became the first causalities during the clash on Bukit Panjang Estate. Rengasamy was from Bukit Cheraka Estate and Yellumale (Elumalai) was from Highlands Estate (refer to my article http://www.malaya-ganapathy.com/2015/06/klang-strikes-causalities-rengasamy-and.html)

On 15th May 1941, Mayandi, Angappan and Keneri were killed when the British Indian troops opened fire to disperse some 900 labourers protesting on Brooklands Estate (refer to my article http://www.malayaganapathy.com/2016/04/klang-strike-1941-four-labourer-died-in.html)

(With this findings, only one labourer who died of bayonet wounds remains unknown and I am determined to find his/her name soon)

Out of all these names, the name "Keneri" sounds a little bit odd due typo-error. The actual name of the person was Konneri (கோனேரி) based on report published in Tamil Murasu dated 11th July 1941. There are a few places in Tamil Nadu with reference to name "Konneri". Konneri derived from two words "Kon" which means King and "Eri" which means pond. There is "Konneri Kuppam" (Konneri Village) in Vellor. There is also a place with a similar name "Konnerirajapuram" in Kumbakonan district in Tamil Nadu, which the Temple Uma Mahewarar housed the biggest bronze Nadaraja statue in the world. In Thirupathi, there is a pond referred as "Konneri" (most probably used by the kings for ritual purposes)

The Straits Times dated 9th July 1942, carried a news of the investigation findings of Brooklands Estate incident where the names of those killed in the gunfire Mayandi, Angappan and Keneri (Konneri) were mentioned. However, it did not mention about the fourth person who died due to bayonet wounds.

Raja Ayoub, the District Officer of Kuala Langat, found Major Howes Roberts of the Indian Army not guilty in ordering his men to open fire towards 900 plantation labourers in Brooklands Estate.

The Tamil Murasu reported that there were four eye-witness were called to give their statement in the inquiry. A research officer of Rubber Research Institute, J.F Dovey, Bandha Singh and Lieutenant F. Derrick and Inspector Yahaya from Klang Police Station, who identified the bodies. The Deputy Public Prosecutor, A.J Graddon also called upon 4 wounded labourers to give their statement before mentioning their crime charges for taking part in the strike on Brooklands Estate, Banting on the 15th May 1941.

According to H.E Wilson, the author of "Labour, Planter and Politics in Pre-War Malaya: The Selangor Riot, 1941", the inquiry was held after tremendous pressure from Government of India under Victor Alexander John Hope, the 2nd Marquess of Linlithgow as the Viceroy of India.  Wilson stated the "inquiries were limited to the question of whether or not the use of force has been justified, and on the basis of the evidence presented mainly by senior police and army officers and estate-manager." 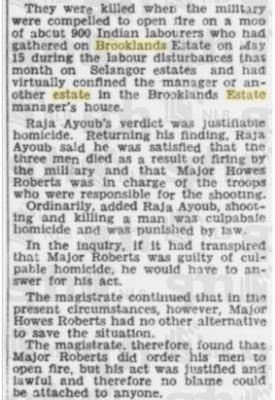 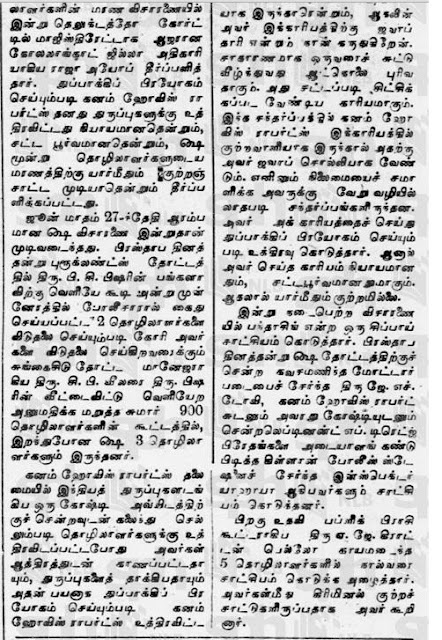