The Singapore Free Press (17th May 1941) reported clash between Indian plantation labourers, police and military at Banting on 15th May 1941.

The Indian Army under orders of Major Howes Roberts opened fire killing 3 strikers and another labourer died due to bayonet injuries. A contingent of Malay Regiment from Negeri Sembilan were also brought in for assistance.

Around 300 labourers armed with parang, six-foot long poles with hooks and "changkol" surrounded the residence bungalow of Manager of Brooklands Estate where the Manager of Sungai Sedu C.B Wheeler who took refuge with P.C Fisher.

Around 124 labourers has been arrested.  The Chief Officer Selangor H.B Langworthy was in-change of Klang and the Director of Criminal Intelligence G.R Livette in-charge of Kuala Lumpur area.

On 16th May 1941, the Resident of Selangor  Major G.M Kidd declared the state of emergency in Selangor and called out the Second Battalion of the Federated Malay State Volunteer Forces, the Signal Company, Armoured Car Unit, the Light Battery, Motor Transport Company, and Mobile Field Ambulance.

All those four dead labourers were not named in the newspaper.
(You may find their names in my article http://www.malaya-ganapathy.com/2016/04/the-causalities-of-klang-strike-1941.html)

The same colonial papers also indicated that the British Indian troops were involved in the clash. 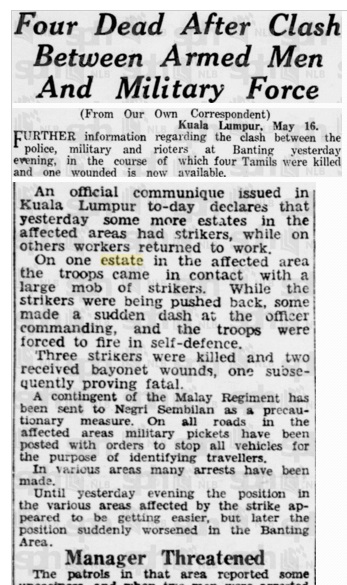 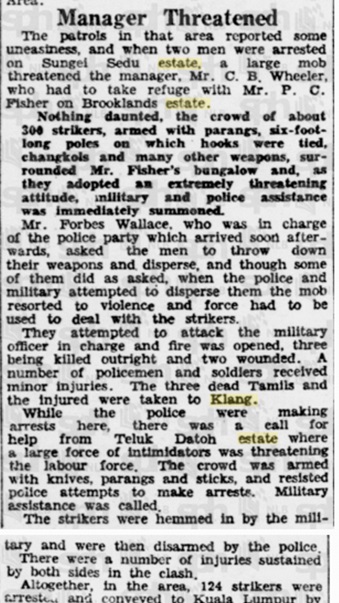 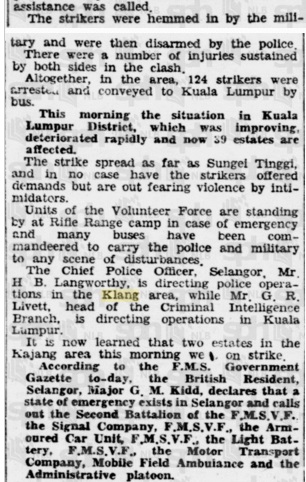