Looking at the effects and changes after Klang Strike, I would consider one of the most important changes that was implemented was the introduction of Trade Union Act in June 1941. It has been asserted that prior to 1940, the unofficial policy of the Malayan government has been "to strangle trade unionism at birth."  With increasing demands for better treatments and wages, the FMS government realized that it needed to introduce Trade Union Act in Malaya. Thus, the Klang Strike staged by plantation workers under Nathan, played important role in changing the mindset of the British in Malaya.

The Tamil daily Tamil Murasu on 26th May 1941 reported the elements behind the Klang Strike based on statement released by the FMS government. It reported that the movement led by R.H Nathan intimidated workers in Selangor and spread elements that threatened the stability of the government.

Even though there were arrest warrants issued against Nathan and his movement, it was put on-hold as the workers' demands also involved wages of plantation workers. The statement also mentioned that the reason behind the agitation was not labourers' dissatisfaction over their wages and living condition but elements meant to disable the government.

Nathan was accused of spreading hatred towards the government despite being "a guest" under the immigration law in Malaya. Nathan, who had no experience working or living on plantation estates also accused involving in subversive activities against the government. Due to act of "treason", Nathan was departed and barred from entering Malaya. The agitators were reported to have been carrying on with their subversive activities in many parts of Selangor.

The statements also mentioned that since "war efforts" have been affected due to the strike and workers to be urged to resolve their grievances through talks, trade union acts shall be soon introduced. 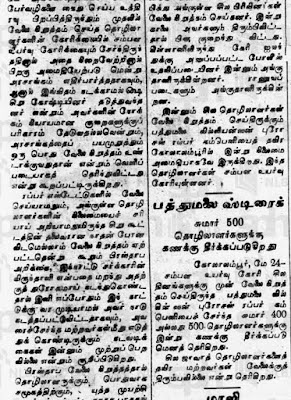 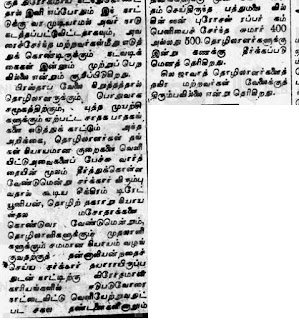 Posted by Saminathan Munisamy at April 21, 2016