At the beginning of Klang Strike, seven workers and a "Kangany" from Midlands Estate were dismissed for instigating workers to strike. They were Gopal, Palaniandy, Karuppan, Periasamy, Murugesan, Gengan, Muthiah and Samikannu. They were told to get their pay and leave the estate. But when the men refused. they were changed under trespassing offence.

The Straits Times on 26th March 1941, reported that huge crowd of labourers presented in the court room and compound staged a protest when the men were sentenced to two months of vigorous imprisonment. Finally, due to the commotion the court allowed the men released on bail. 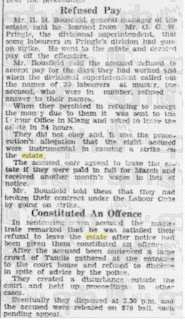 (From Our Own Correspondence)

Kuala Lumpur Mar., 26.
Found guilty of trespass on Midlands Estate after having been given notice, seven Tamils labourers were yesterday sentenced to two months' rigorous imprisonment by the Klang Magistrate.
The accused were Gopal, Palaniandy, Karuppan, Periasamy, Murugesan, Gengan, Muthiah and Samikannu and with the exception of Palaniandy, who was acquitted, others were convicted.
A large crowd of Tamils were in court to hear the proceedings.

Refused Pay
Mr.R.M Bousfield, general manager of the estate, said he learned from Mr G.C.W Pringle, the divisional superintendent that some labourer in Pringle's division had gone on strike. He went to the estate and decided to pay off the offenders.
Mr. Beaufield said the accused refused to accept pay for the days they had worked and when the divisional superintendent called out the names of 30 labourers at the muster, the accused, who were in the number, refused answer to their names.
When they persisted in refusing to accept the money due to them it was sent to the labour office in Klang and asked to leave the estate in 24 hours.
They did not obey and it was the prosecution's allegation that the eight accused were instrumental in causing a strike on the estate.
The accused only agreed to leave the estate if they were paid in full for march and received another month's wages in lieu of notice.
Mr. Beaufield told them that they had broken their contract under the Labour Code by going on strike.

Constituted An Offence
In sentencing the seven accused the magistrate remarked that he was satisfied their refusal to leave the estate after notice had been given them constituted as offence.
After the accused been sentenced a large crowd of Tamils gathered at the entrance to the court house and refused to disperse in spite of advise by the police.
They created a disturbance outside the court and held up proceeding in other cases.
Eventually they dispersed at 3.30 pm and the accused were released on bail $70 each pending appeal.
Posted by Saminathan Munisamy at April 07, 2016