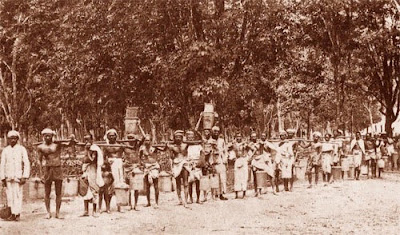 18th Feb 1941 - Another meeting was organised by Klang District Indian Union which attended by workers from Morton Estate, Tanah Bahru Estate, Bukit Kamuning Estate and Damansara Estate. The meeting was chaired by Thangiah. They decided that a series of strikes to be staged soon and copies of demand formulated by Nathan and Menon were sent to the managers of a number of estates.

2nd Mar 1941 - In a meeting of the Kampung Jawa Indian Union, Menon said:
"Before we organised this Union you all thought that the Capitalists were God and we were slaves. Now at least 25 per cent of you realise that this is not so. We are Indian and slave to nobody. In future we must co-operate and advance our Union until the estate proprietors and officials will realise that we are human beings.
In the same meeting, Nathan said:
" A lot of coolies now understand what is the difference between labourers and capitalists. Co-operate is our watchword. The estate proprietors and agents will try to break this co-operation, but we cannot allow them to interfere with our work. Because of this, I fear Menon and I are expecting trouble. You labourers must believe in us and unite together."

2nd Mar 1941 - Workers of Glenmarie Estate were first to go on strike demanding higher salary and better living conditions. It has been reported that Nathan and Menon had visited the estate workers on the 28th February and 1st March 1941. They demanded 70 cents for men and 60 cents for women.

4th Mar 1941 - At Midland Estate 7 workers and a Kangany (Gopal, Palaniandy, Karuppan, Periasamy, Murugesan, Gengan. Muthiah and Samikannu) and were arrested for instigating labour disputes. Earlier they were dismissed and ordered to leave the estate within 24 hours. When they refused, they were prosecuted for illegal trespassing.

18th Mar 1941 - The High Commissioner Shenton Thomas approved the issuance of arrest warrant for R.H Nathan, Y.K Menon and R.K Thangiah. But the Controller of Labour, C Wilson, thought the arrest might aggravate situation and hamper CIAM's efforts of peaceful solution. Wilson's view was supported by Major Kidd and Legal adviser of Federated Malay States, Adrian Clark. For Wilson's tardiness in approving the arrest Nathan and Menon, he was removed from the office by Shenton Thomas after Klang Strike was subdued.

25th Mar 1941 - 200 workers attended court hearing where 7 those arrested were sentenced to 2 months of rigorous imprisonment. Workers caused up-roar when refused to vacate the court-room and compound. Workers only dispersed after the accused were granted bail. (Refer to my article http://www.malaya-ganapathy.com/2016/04/klang-strike-1941-indian-labourers.html)

27 Mar 1941 - Agent of the Government of India C.S Venkatachari criticized the use of court and law as an instrument to break strike.

28th Mar 1941 - C. Wilson arranged meeting between President of CIAM Nadyan Raghavan, Secretary K.A Neelakanda Aiyer, the Agent of the Government of India, Venkatachar and T.E Upton who was the Manager of Sungei Way Estate, Chairman of Klang District Planter Association and Secretary of UPAM. In the meeting it was decided and announced that the wages to be increased for 60 cents for males and 50 cents for females with effective of 9th April 1941. Yet, the members of the UPAM expressed bitter resentment over the settlement and viewed it as a betrayal of UPAM interests.
9th April 1941 - Following meeting with CIAM, the United Planter Association of Malaya (UPAM) agreed and announced increase in wages from 55 cents to 60 cents for men and 45 cents to 50 cents for women. N. Raghavan advised the workers to return to work thus bringing to end of first phase of strike. Even though the increase in wages was seen as improvement, Nathan and Menon argued that that the new wages will not satisfied the workers' needs thus determined to press for full demands through further strikes. It was not only the wages issue triggered a second waves of strike, there was some very subtle seems to be knitted in the labour struggle. For centuries the Indians were treated as less than human being and slaves. In all estates, the labourers were forces to alight from their bicycles when they met their British masters. Indian labourers wanted to be treated with dignity. Thus, the workers started to realise that only one language understood by the capitalist planters ...STRIKE! Only through strike the basic demands shall be met!

11th April 1941 - Strike resumed in many estates. Water supplies to workers in Whiteareas, Damansara and Blackarea Estates were cut off.

15th April 1941 - Sporadic strikes occurred again. Highlands Estate was in protest over dismissal of four workers. In Carey Estate workers demanded an hour for their lunch break instead of the usual 30 minutes. In Port Swettenham Estate, workers demanded that flag of Indian National Congress to be flown at the entrance of estate and picture of Gandhi to be hung in homes of estate workers in the estate.

18 April 1941 - At North Hammock Estate, workers staged strike due to an attempt by the an assistant manager to remove the Gandhi cap worn by workers.

26th April 1941 - Nathan in addressing the gathering of workers said;
" I am glad to see such unity in this district. Continue united until you get required results. Unity is strength. In future, make your demands to the Management two weeks before you stop work. When you strike, see the essential services are maintained, such as Line Sweepers, postman and etc. During strike, do not ask for the summary dismissal of your superiors. If any of you are paid off as a result if taking parts in a strike, all of you must immediately strike again for his account. Do not forget, unity is strength. Dress any way you wish, it is your privilege. Wear Gandhi hats if you like, and do not remove them. In the same way, do not get off your bicycles on public road. Do not fear that your place will be taken by Chinese or Javanese. The country is short of labour, and there is no immigration at present. These are critical times and for this reason your demands will met. For the first time the Europeans realise that you are human beings; now your opportunity."