UN To Discuss Ganapathy’s Case - A Protest Move by WFTU.

UN To Discuss Ganapathy’s Case? A protest move by WFTU

Another prominent English daily publication in Singapore back in the 40s was Indian Daily Mail who ran by K.Sarangabani. Sarangabani also owned the Tamil Murasu (Tamil daily) in Singapore.
(My apologies to the readers as the print which obtained from the National Library of Singapore microfilm was not very clear)

If we are to think that Ganapathy was just a local union leader fighting for a bunch of Indians workers in estates, then this news surely proves us wrong.

It was reported that World Federation of Trade Unions staged a protest note to the United Nation on the assassination of Ganapathy and Veerasenan.

Note the strong language used as a condemnation over the act of the British administration in Malaya as was seen that union leaders literally were “hunted down”. 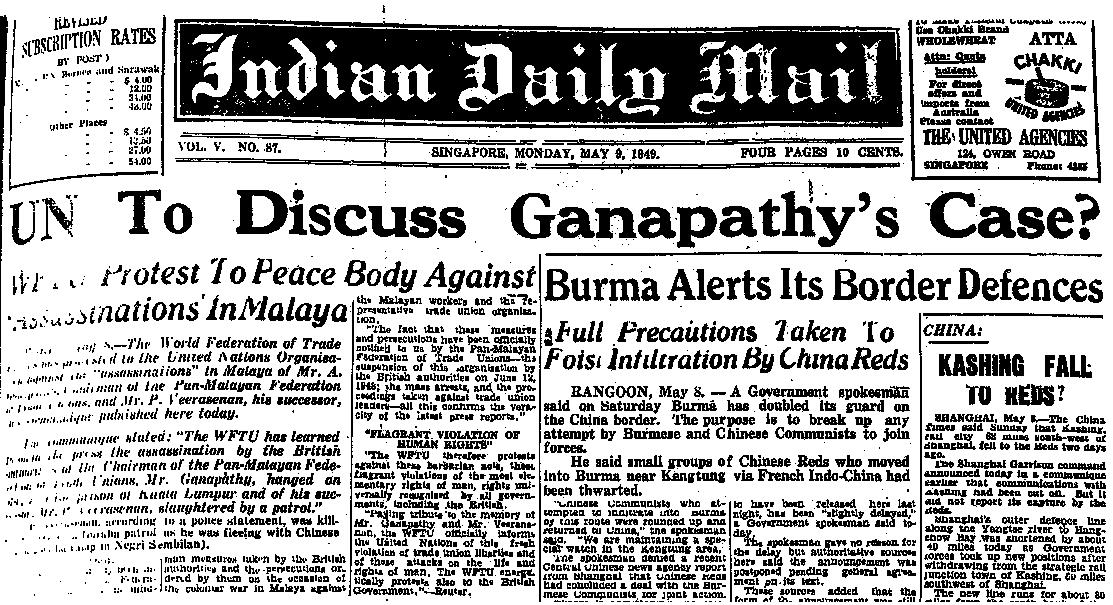 WFTU Protest to Peace Body against Assassination In Malaya

The communique state:“The WFTU has learned through the press the assassination by the British authorities of the Chairman of Pan Malaya Federation of Trade Unions, Mr.Ganapathy, hanged on May 4th in prison of Kuala Lumpur and of his successor Mr. Veerasenan, slaughtered by a patrol.”

(Mr. Veerasenan, according to a police statement, was killed last week by a Gurkha patrol as he was fleeing with Chinese from a guerrilla camp in Negri Sembilan.

The communique added: The WFTU had already been informed by the Pan-Malayan Federation of Trade Unions of the inhumane measures taken by the British authorities and the persecution ordered by them on the occasion of the colonial war in Malaya against the Malayan workers and the representative trade union organization.

The fact that these measures and persecutions have been officially notified to us by the Pan Malayan Federation of Trade Unions - the suspension of this organization by the British authorities on June 12, 1948; the mass arrest, and the proceedings taken against trade union leaders – all this confirms the veracity of latest press reports.”

“The WFTU therefore protests against these barbarian acts, these fragrant violations of the most elementary rights of man, rights universally recognized by all governments including the British.

“Paying tribute to the memory of Mr.Ganapathy and Veerasenan, the WFTU officially informs the United Nation of this fresh violation of trade union liberties and of these attacks on the life and rights of man. The WFTU energetically protests also to the British Government." Reuters