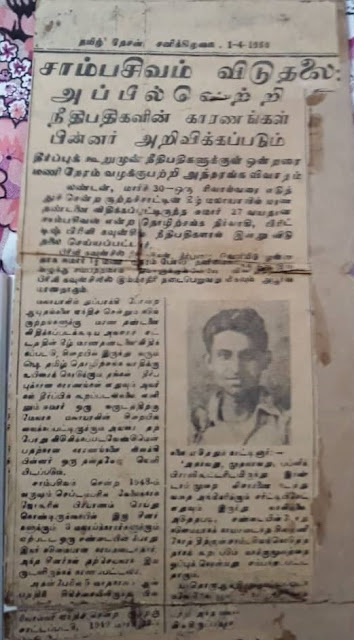 It also stated that Sambasivam pulled out an automatic revolver during a struggle in which he and two Chinese companions fought with three Malays at Bukit Kepong.

Sambasivam was represented by P.V Chary. Chary who served as the Honorary Secretary of Johor Bar Council in 1949 and the first Indian to be appointed to Johore Council of State in 1949.

In his defence, Sambasivam said he did not know where the automatic revolver came from nor the reason why he was attacked by the Malays.

But almost a year later, the same daily carried the news on Sambasivam's release. This was due to the efforts taken by John Thivy who filed an appeal for Privy Council in June 1949. Sambasivam's case should be considered important as it set the precedence for the Malay States which had no right of appeal to the Privy Council in criminal proceedings prior to WW2.

In the case, the judges took a unusual step of retiring to discuss the case privately for an hour and half before delivering judgement in London.

Sambasivam was sentenced to death for illegal possession of an automatic revolver by the Johor Bahru High Court in March 1949. 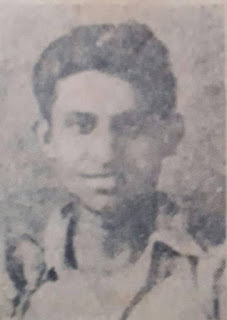 In the first trial, Sambasivam was acquitted of possessing unauthorized ammunition, but a second retrial was ordered on the possession of revolver. He was convicted and his appeal was dismissed. Interesting to notice that Privy Council noted that there was no certificate from Public Prosecutor authorizing the second trial.

Another point to concern is the admissibility of a statement said to have made by Sambasivam within a few hours of being gravely wounded in the fight.

The news also stated that the Malays involved in the fight described the affair as an unprovoked attack upon them by these three "Communists" . They handed over a revolver which they alleged had been captured from Sambasivam to the local headman.

The Singapore Free Press publication dated 31st March 1950 and Malaya Tribune 30th March 1950, further revealed that there was no reasons given why the judges retired and discussed the case in privately for 90 minutes, which considered unusual for the Privy Council. The appeal before the council was done by Counsel D.A Scott Cairns. The Counsel made five points during the appeal:

1. No certification from Public Prosecutor authorizing a second trial
2. Admissibility of a statement given by Sambasivam within a few hours after being gravely wounded in the attack
3. The Malays who attacked him described the affair as an unprovoked attack by three "Communists"
4. The Malays handed over an automatic revolver to the headman which they alleged captured from Sambasivam
5. Acquitted from charges of possessing illegal ammunition


Lord Simonds, upon releasing Sambasivam announced that their Lordships' reasons would be given in due course.
(Note: 1st January 1985 marks the end of the Judicial Committee of the Privy Council in Malaysia. Prior to 1946, litigants in some of the 11 states in Malaya had the right to appeal to the councils in the respect of civil matter only. Sambasivam's case set the precedence for the Malay States which had no right of appeal to the Privy Council in criminal proceedings prior to WW2. Later, from 1st January 1978 to 31st December 1984, again the Privy council's jurisdiction was limited to civil appeals only)

Note:
Jananayakam, the leftist's mouthpiece reported on the 18th May 1949 that Sambasivam was born in Durban in 1925. On July 27th 1927, Sambasivam arrived in Malaya with his sister and mother. The single mother settled down in Sitiawan, Perak.
Sambasivam studied until Standard 5 at the Sithambaram Tamil School and from 1940 to May 1942 he served as an Assistance Teacher at the same school.
It is said that Sambasivam had 2 brothers and 6 sisters. He moved to Singapore to live his sister in June 1942. After the war, he took up profession as a Tamil school teacher in Paloh, Johor. He is known for his sense of caring for the poor and labourers. The family lost touch with Sambasivam and only knew his whereabouts after he was hospitalised. The mother visited him at the hospital. The daily also mentioned that Sambasivam's uncle spend his wealth for his trial. ECC Thuraisingam was Sambasivam's council for appeal. 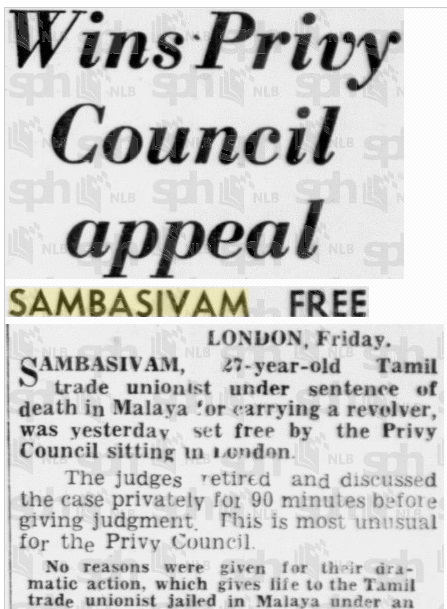 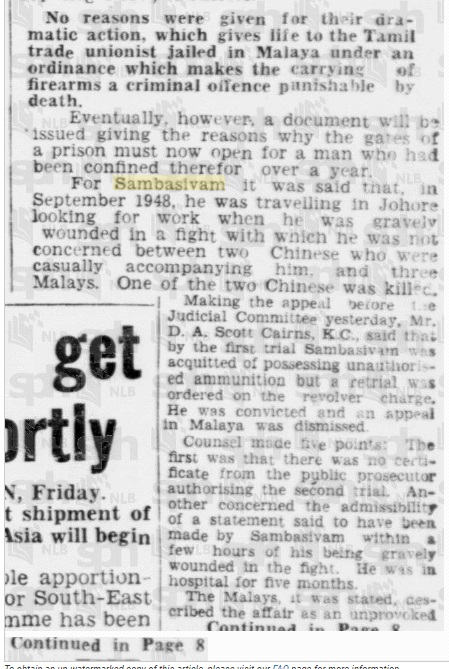 Posted by Saminathan Munisamy at October 12, 2016