Kedah Riot - AM Samy Wanted Labourers to be Repatriated to India

As the clash between labourers and police intensified in Kedah during the infamous Kedah Riot in March 1947, The Straits Times dated 7th March 1947 reported that the Representative of Government of India to Malaya, S.K Chettur, and other prominent Indians arrived in Sungai Petani for inquiry into the Kedah troubles.

The 60-year old leader of 26,000 estate Indian labourers, A.M Samy told the reporter that the labourers wanted to be repatriated to India where they would be better off. Samy was the President of Indian section of Rubber Workers General Labour Union (RWGLU) and Vice President of Kedah Pan Malayan Federation of Trade Union (PMFTU). Kedah PMFTU had an affiliation of 54 unions.

The President of the Kedah PMFTU, Chong Woon and Samy met Deputy Commissioner of Labour, J.T Rea seeking explanation why two mass arrests were made and whether the labourers have the rights to strike.

Rea replied that two men that resisted the police in the exercising their power had nothing to do with labour conditions. Samy was told that the present troubles arose through the activities of the Youth-Corps which had been going around beating up conductors, tying workers up for drinking toddy and trespassing on estates against the wishes and often without permission of the managers.

Meanwhile The United Kedah Planters blamed subversive elements using political agitation coupled with intimidation and extortion were behind the grave situation in Kedah. The association alluded to "external dictation" to estate labourers - an obvious accusation against PMFTU. The planter association too blamed the situation further deteriorated the government as little had been done to formulated mechanism to allow legal contact to be achieved between labourers and employers.

The planter association stated three requirements necessary to resolve the situation - law and order to be re-established and maintained, labour union must realised their part in rehabilitation of the industry and country (after war) and labour must be free itself from external dictation.

It was reported that according to J.T Rea, that "agitators" were active in Tonghurst Estate in South Kedah which may go on strike again. But the Union men said Rea was forcing them to continue with the strike and attempting to engineer strikes on other five more estates - Dublin, Kuala Dingin, Batu Lintang, Somme and Ghim Khoon.

Rea said the Indian workers on Sungai Toh Pawang Estate wanted to return to work but prevented by local union secretary for working or leaving the estate.

At Bukit Sembilan Estate, workers were reported willing to return to work. The police have been maintaining a guard. The ringleader (named as Samy in other reports) was killed in the clash in Bedong on 28th February.

(Note: The so-called "ringleader" of Bukit Sembilan Estate who was killed in the Bedong Toddy shop protest was known as Saminathan. During the protest, it is reported that Saminathan stood up in the crowd and told the police that the Indians were not against the government but against the toddy shop operation in Bedong. This prompted a British policeman (of a Punjabi origin) to strike a blow to Saminathan's head who later succumbed to his injuries at Penang Hospital)

""In February 1947, a crowd of a thousand or so Thondar Padai descended on Bedong, only to be confronted by police. A labourer came forward: We are not anti government,' he cried, 'We are only against the drinking of toddy." He was clubbed to the ground and later died in hospital. The coroner recorded a death of 'justifiable homicide.' A series of protest strikes erupted in the area. At Bukit Sembilan estate on 3rd March 1947 trouble was triggered by dismissal of a woman activist, and police faced orchestrated resistance."Women were to be forefront armed with pepper." it was reported; "boiling water was kept ready; men were to be armed with sticks, stones and bottle full of sand, trees were to be cut down make road blocks." Sixty-six people were arrested, and all but two women of them sent to jail after a trial that lasted only a day. Fearing a rescue attempt, the police closed hearing to public. An investigation by the Malayan Indian Congress revealed collusion and premeditation on the part of local planters and police, S.K Chettur claimed that women were beaten and there were allegations that two young girls were raped in custody. 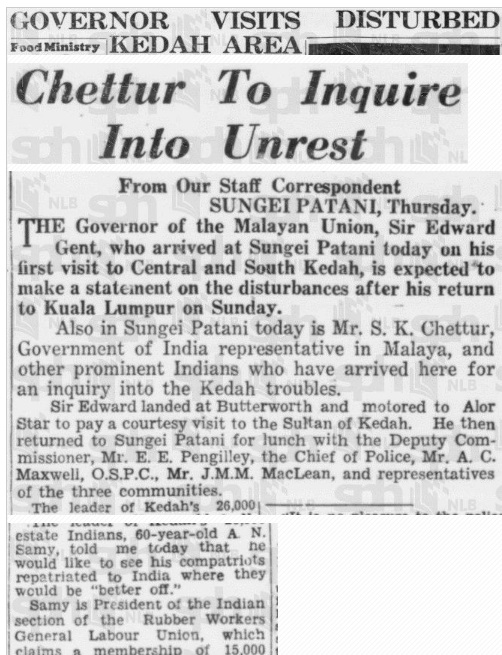 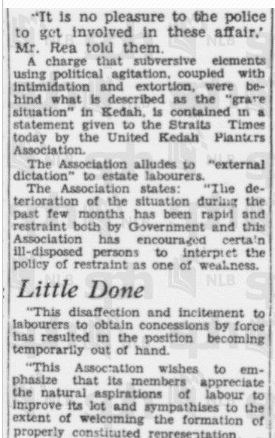 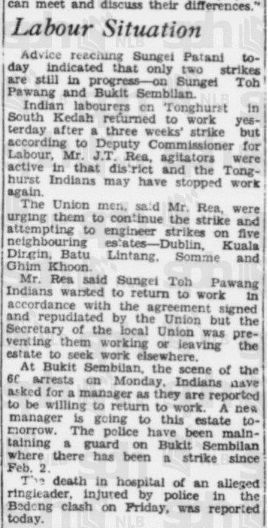 Posted by Saminathan Munisamy at October 18, 2016