Contempt of Court - Tamil Nesan for "Save Sambasivam" Article

In the attempt to save another Indian unionist from being hanged, the local Tamil daily "Tamil Nesan" took a bold move to published an article titled "Save Sambasivam". The article was written by Athi Nahappan, who later elected as minister. He had also chaired the Royal Commission of enquiry into the workings of local government in Malaysia. His report which is known as the “Athi Nahappan Report “ was a 2 feet high (4 volumes) is regarded as one of the most comprehensive reports ever published by our government. With great pride I would like to inform that this report sits in the Harvard library as a basis for how local governments should function.

(To understand the importance of the the Athi Nahappan Report please read - http://www.malaysiakini.com/letters/292928) 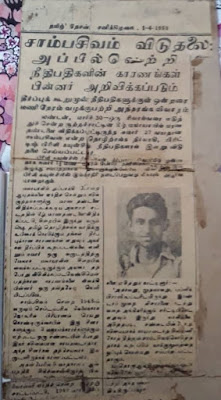 Now, back to our story on Sambasivam, the Singapore Free Press dated 2nd July 1949 reported that the Attorney General of Malaya Foster Sutton applied in the High Court for an order against two proprietors of  the Tamil Nesan - S.R.N Palaniappan and M.Mayandi Chettiar and the editor, printer and publisher , Athi Nahappan for contempt of court.

It was made on the grounds that Nesan had published an article on 9th June what purported to be part of an article published in Madras Dhinamani on June 3rd. The article referred to the case of Sambasivam who was sentenced to death for carrying arms. Sambasivam had applied for for leave to appeal to the Privy Council.

In was reported that, the AG said that the article which also made references to Ganapathy's case, inferred that justice had not been fairly and impartiality administered in the case of Sambasivam.

"The article as a whole was calculated to bring the administration of justice by this court into contempt", said Sutton.

Justice Spenser Wilkinson granted the order and case to be heard on the July 18th. 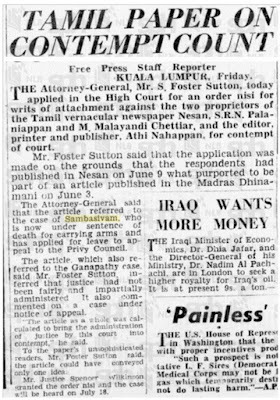 Posted by Saminathan Munisamy at October 06, 2016