In a fierce clash between police force and Indian labourers on Bukit Sembilan Estate on the 17th February 1947, resulted in 66 labourers arrested and 21 were injured. Among the arrested were several women.

In the fight, the Chief of Police of Kedah A.C Maxwell  received a long cut on the scalp when a women hit him with a stick. Two constables received minor injuries.

The clash was reported due to a visit to Bukit Sembilan Estate by a strong party of police headed by Maxwell and five European officers.

The police went to the estate to bring in an estate labourer (Dresser Paliah/Balaiah) on warrant for alleged criminal intimidation. Apparently, the police who wanted to search the labourers' line were stop by the labourers. The labourers refused to give permission and brandished sticks - some with iron and nails at the end. Even reported that one labourer had a brass weighted "tongkat".

The Chief Police gave repeated warning and waited for an hour before started to move in clearing five-foot way of the labourer line. The police met with Tamil men, women and children who retaliated with sticks and packets of chili pepper. The women and children armed themselves with chili powder took the front row of the fight.
Cans of boiling water which the women had prepared during the hour wait were prepared for the fight, but were said to be kicked over by the police and not used.

Police said the man (Balaiah) who to be arrested had presumably escaped. The police also covered a lorry which was seized by the labourers on the estate last month.

(My Observation) Well, this was what has been reported in The Straits Times on the 4th March 1947, with regards to police and labourer clash on Bukit Sembilan Estate, that saw not only men but women labourers too participated.

It is obvious the news was siding the law enforcement and the estate owners, but we need to look into what actually happened to these labourers of Bukit Sembilan Estate.

It all started when a estate dresser (very much like a Medical Assistant but without holding any medical qualification or properly trained) named Paliah or Balaiah stopped a lorry carrying fresh water to the manager's bungalow. The Malay driver who accompanied by the manager were stopped by the a group of workers headed by Paliah. Now, the next question is - why the workers stopped the lorry carrying water to the manager's bungalow?

Well, it was known fact in the estate that the management had told the workers to seek for their own source of water - from the rivers and ponds. It is said that the estate management was not responsible to provide clean drinking water for the workers - refer to work by Christopher Bayly and T N Harper - Forgotten Wars- The End of Britain's Asian Empire) . The workers had no choice to depend of ravines and ponds which they shared with their cattle. The labourers needed to seek their own source of water for survival.

Being neglected without clean drinking water and with increasing cases of disease related unhygienic conditions  among labourers and their children, prompted the young dresser and the workers to seize the lorry which brought clean water the manager's bungalow.

What follow next was mayhem. In the process of arresting Paliah, the labourers stood against the police. Clash broke out between police and workers. Among those arrested were women, two of them have been raped in police custody.
Note: In the Forgotten Wars- The End of Britain's Asian Empire, Christopher Bayly and T N Harper :

"Condition at Bukit Sembilan estate were particularly dire: the only supply of water came from ravines and labourers shared it with their cattle; the manager has their water brought from town lorry. The strikers' demand focused on wages and family needs, such as creches (day care centres), better housing and equal pay for women. But the real source of anger was the summary dismissal of workers: "Managers feel that because we reside on the estate we are as much as their property as rubber tress." 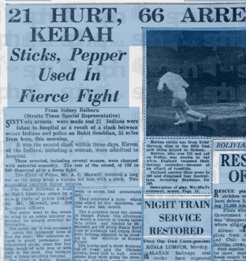 Posted by Saminathan Munisamy at October 14, 2016