The involvements of Malayan Indians in the Communist Party of Malaya (CPM) are not widely discussed. But when we read Michael Stenson's Class, Race & Colonialism in Peninsular Malaya (page 56), the writer stated :

"So too was S. Amalu who had eventually joined Malayan Communist Party and had been sent to Russia for training in 1931. Although somewhat disillusioned after losing his contact in Hong Kong  and being obliged to give himself up to the police, Amalu remained strongly influenced by Left Book Club and other socialist publications that managed to slip through the British censors"

Hence, who is this S. Amalu that Stenson had written about?

So, I made some homework and would present to you about S. Amalu who seems to be a very interesting character based on news reported in Malayan Tribune dated 30th Dec 1933(page 6), The Strait Times dated 23rd Dec1933 (page 12) and The Singapore Free Press and Mercantile Advisers 23rd Dec 1933 (page 3). A huge coverage was given in Malaya and Singapore for his trial in Singapore. 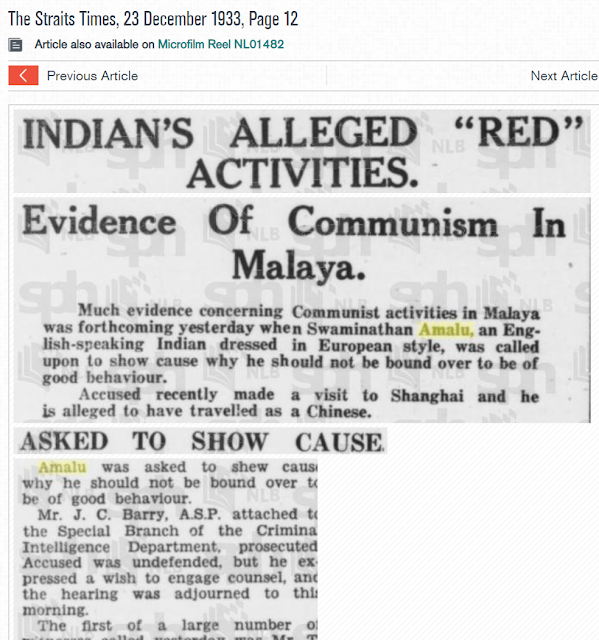 2. Amalu was English and Tamil educated. He was a former student at Methodist Boys School in Kuala Lumpur.

3. At the age of 12 (in 1928), he met Tai Eng Seng (also English educated) at Methodist Boys School. They became good friends. This is believed Tai Eng Seng would have indoctrinated Amalu into communism and a made him a member of Malayan Communist Youth Corps.

4. Later Tai Eng Seng together with other Amalu's comrades - Tan Kim Beng, T. Andrew and Low Ching Pak were arrested in Singapore and banished for being members of MCP.

5. Evidence of Amalu's involvement in Malayan Communist Youth Corps was obtained when police obtained documents from a house in Layang Village, Kuala Lumpur. The raid against the Communist Youth Corps was conducted by Capt. Morris - Assistant Commissioner in FMS Police Department. The documents also proved that Amalu was associated with seditionists who worked against British.

6. In Sept 1930, Amalu left Kuala Lumpur and came to Singapore. He stayed for a while at his uncle's place in Pricep Street, near Bras Basah Road while working as a mechanic. Later he moved to live at No.307, Joo Chiat Road under a false name, Manikam.

8. In June 1931, Amalu was arrested shortly after the raid on Malayan Communist Youth Corps and was charged under the Societies Ordinance. But acquitted later when found no concrete evidence against him.

7. On June 27th, 1932, a house was raided in Sophia Road in Singapore where a Hakka teacher from Kuala Lumpur, T. Andrew, was arrested. Andrew admitted that he was a member of Communist Youth Corps which was functioning under Malayan Students' Federation. Andrew also mentioned his association with Amalu in his statements. Andrew was sentenced to six months of rigorous imprisonment and banished. Andrew mentioned Amalu was member of Malayan Communist Party active in Singapore and Kuala Lumpur.

On 23rd Sept 1933, Amalu boarded a ship "Conte Rosso" from Singapore to Shanghai on behalf of CPM without a passport and travelled under a Chinese name - Yeo Cheng Hock!

8. Amalu arrived in Shanghai on Oct 2nd 1933 and left Shanghai to Hong Kong on Nov. 18th after meeting some important persons.

10. Police found seditious documents related to communist activities in his possession - copy of the Shanghai Evening Post on news about Mr. and Mrs. Noulens who are serving life imprisonment in Shanghai for being communist in China, handwritten note on "Comrade M. Singaravelu -73" who was known communist in India and a copy of The International Press Correspondence printed in Kuala Lumpur.

11. Amalu was unpresented in court. He fought his own trail. Finally he was discharged with RM500 penalty for traveling without passport.

The Part 2 of the article will be detailing on Amalu's arrest in 1931 which involved a Frenchman Serge Lefranc also know as Joseph Ducroux. Ducroux accused of assisting in managing Malayan Communist Party. Ducroux's case was regarded the first case involving foreigner and one of the biggest crackdown on the communists in Malaya by the British.

Posted by Saminathan Munisamy at February 19, 2021