The Comintern was established in Moscow in 1919, two years after the Russian Revolution. The Comintern was in charge of supervising communist movements all over the world. Supervision meant the recognition of the establishment of a communist party in each country or colony, approval of personnel appointments in each communist party, allocation of funds for communist movements, dispatching of agents, distribution of directives, receiving and training of communists from other countries, and so on. These activities were conducted through liaisons between Moscow and communist movements in each country. The organization that constructed, operated, and maintained these liaisons was the OMS (Otdel Mezhdunarodnykh Svyazey, Department of International Communication), established within the Comintern in 1921. OMS “conducted the clandestine activities of the Comintern abroad, including the distribution of confidential directives and propaganda material, the forging of passports and identity papers for overseas agents and the implementation of espionage operations. The activities of the Comintern, especially clandestine activities abroad, were heavily dependent on liaisons operated and maintained by OMS, but it was not easy to maintain liaisons between Moscow and distant places.

The fact that East and Southeast Asian regions were so distant from Moscow led to the establishment of the Far Eastern Bureau (FEB) of the Comintern in Shanghai as a regional headquarters to facilitate liaison. FEB was set up in 1926, and its original mission was to supervise communist movements in China, Japan, and Korea. But by 1930 its jurisdiction had expanded to Taiwan, French Indochina, the Dutch East Indies, British Malaya, and the Philippine islands.

There was another organization in Shanghai that was also in charge of supervising communist movements in East and Southeast Asia. It was the Pan-Pacific Trade Union Secretariat, established in 1927. PPTUS was under the Profintern (Red International of Labor Unions), and its mission was supporting and promoting labor union movements in China, Japan, Korea, India, and Southeast Asia.

While Teo was not identified by the British Political Intelligence Services in 1931, Ducroux, together with Wong, was detected, monitored, and finally arrested by the Special Branch in Singapore on June 1. The Special Branch in Singapore obtained contact addresses in Shanghai and Hong Kong from seized documents, and it sent these addresses to the Special Branch both in the Royal Hong Kong Police and in the Shanghai Municipal Police. Based on information sent from Singapore, Nguyen Ai Quoc was arrested in Hong Kong on June 6. Hilaire Noulens and his wife, the OMS (Otdel Mezhdunarodnykh Svyazey, Department of International Communication) staff in the regional headquarters in Shanghai, were arrested in Shanghai on June 15, 1931.

After Mr. and Mrs. Noulens’s arrest, the Special Branch of the Shanghai Municipal Police seized documents that Mr. Noulens kept at various houses in Shanghai. And from these documents, the Special Branch was able to piece together information not only about the purposes, methods, and current status of international and regional communist movements in China, French Indochina, British Malaya, Japan, Taiwan, Korea, and the Philippine islands, but also about communists and agents engaged in these activities. This information was shared with the relevant countries and colonies. For example, it resulted in the arrest of about 30 communist suspects in Japan. 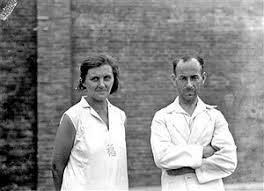 Mr. and Mrs. Noulens in Shanghai
At the time of the arrest of the Noulens, Nguyen Ai Quoc, and Ducroux, there were links from Shanghai to French Indochina, Siam, and British Malaya via Nguyen Ai Quoc in Hong Kong. Ducroux had succeeded in forging a link with the liaison officer of the Malayan Communist Party. As for the Indonesian Communist Party, Teo was in charge of liaison making—but it was not clear whether he had succeeded or not. The true identity of the agent in charge of making links with the Philippine Communist Party was not known. He used the code name “Leon,” and it is known that he succeeded in contacting the Philippine Communist Party. Figure below shows the Shanghai-Southeast Asia liaison network in June 1931. Tan Malaka does not appear in this figure, but there was a plan to dispatch him to Rangoon for establishing links between India and Southeast Asia. 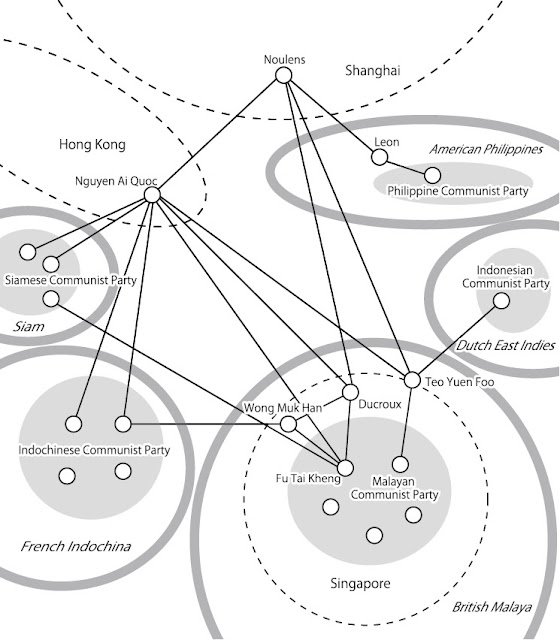 In June 1931, British authorities in Singapore arrested a Comintern operative using the name Joseph Ducroux. An address book found on his person then led the Shanghai Municipal Police to Hilaire Noulens and his wife, both Comintern agents, who were collectively in charge of funneling all monies and communications between the Comintern, the Chinese Communist Party, and Communist organizations throughout East Asia. The arrest of the Noulens, and the material found in their apartments, compromised hundreds of Communists and their international networks in East and Southeast Asia. The case materials themselves, found in British, French, and Dutch archives, expose the ways the Comintern’s Far Eastern Bureau used Soviet capital and an international cast of characters to combat European imperialism in East and Southeast Asia during the interwar period. Although these efforts suffered from serious weaknesses, European colonial administrators nevertheless worried constantly about the specter of an all-powerful Soviet machine bent on world domination. Their response was cross-colonial collaboration to undermine and destroy the Comintern’s activities in the region. - http://www.secretintelligencefiles.com/Content/swwf.fo1093/0093/002

Caption above taken from an abstract of a journal related to secret files on Noulens Affairs which linked to communist organizations thought out East Asia. Interesting S. Amalu also indirectly linked to the case.

In June 1931, the Criminal Intelligence Department under R.H Onraet in Singapore managed to crackdown on Malayan Communist Party and arrested one Frenchman along with 15 Chinese and an Malayan Indian. News of the arrest and trial were published in The Straits Times dated June 19th, 1931, The Malayan Tribune dated June 20th, 23rd, 1931.

1. Ducroux arrived from Hong Kong on April 27, 1931 and set up an office in Winchester House, Collyer Quay on May 1st, 1931. He represented a French firm, Cidlo, manufacturing steel tools and other hardware.

2. R.H Onraet who was also the Acting Chief Police Officer rent our a room in front of Ducroux office and set up two agents to watch Ducroux movement.

3. Onraet informed that the Criminal Intelligence Department received information that efforts were made to establish connection between communists in Malaya and Shanghai. Based on the information received, the CID put surveillance on Ducroux.

4. Six of the 15 Chinese arrested pleaded guilty. Ducroux, Amalu and 9 others claimed to be tried.

5. Seditious material such as pamphlets and newsletter of "Communist Youth" had been seized from a house in Singapore. A letter contained the detail and instruction regarding labour movement in Malaya was addressed to Saminathan Amalu also seized. A greeting letter from Communist Party of India centered in Calcutta which congratulation the comrades of Malayan Communist Party also found.

6. A former MCP member, Ahmad bin Suahin, a tailor from Geylang testified that he was introduced to Wong Muk Han by a Javanese Communist by the name Ali Majid in a meeting held in Upper Serangoon. According to Ahmad, the Communists were out to overthrow the Imperial Government in Malaya and enable Malayans for rule their own country as republic similar to Soviet Russia.

7. Ducroux was found guilty and sentenced to 18 months of rigorous imprisonment. Six were discharged but rearrested and banished. Six more pleased guilty. Amalu was discharged due to lack of evidence.

8. R.H Onraet gave a brief history of Ducroux. Ducroux was a militant communist, attended Leninist School in Marseilles, France. A warning circular had been issued by the Foreign Office on Ducroux and warning all government against granting permission to land. Ducroux obtained passport under the name Lefranc.

9. A series of arrest had been made in Hong Kong and Shanghai based on address details found in Ducroux pocket book including the Noulens which crippled the whole far east network.

10. In the trail, Amalu claimed that he came to Singapore to quench his thirst on knowledge where he studies economics and politics. He was completed his Senior Cambridge at Anglo Chinese School in Singapore and Junior Cambridge in Kuala Lumpur. He is ambitioned to be lawyer but abandon the idea due to poverty. Later, opted to be an engineer which he claimed he needed qualification. He opted for mechanical job with Lvons Motors but left the job as they made him only to grease the cars. He was working for Fraser and Neave before arrested by Special Branch Chief Inspector Rai Bahadur Prithvi Chand.

11. Amalu was not represented and he claimed to be tried. He fought his own case in the court. He was discharged by the court due to lack of evidence.
Posted by Saminathan Munisamy at February 20, 2021