On 15th June 1941, the Sunday Tribune (Singapore) reported that a resolution was passed at an extra ordinary general meeting of the Indian Association held at the Association Pavilion,  Balestier Road on the 14th of June 1941, urging the Federated Malay States Government and His Excellency the High Commissioned to take early steps to appoint a committee of enquiry to collect evidence and submit a report concerning the cause of and happenings connected with the Klang Strike.

Over 100 members attended the meeting which presided over by S.C Goho. The meeting also expressed the condolences to the family of the labourers who lost their lives in the course of disturbance connected with the strike.

The person who moved this resolution was KPK Menon, a prominent lawyer and one of the founding members of Indian Independence League (IIL). Later in 1943, KPK was arrested and prisoned along with Captain Mohan Singh (founder or INA) for Menon's critical views on Chandra Bose.

KPK Menon said, "Humanity and a sense of justice demanded that they should understand the whole situation correctly and find a solution. What was the reason for the strike and how it happen? The labourers found their wages were inadequate and difficult to maintain their families. They made a demand to increase their wages and patiently waited for 18 months. Being no reply, the resorted to the only legitimate weapon given to the labourers -  go on strike to show their resentment openly."

"The estate management instead of tackling the problem tactfully and sympathetically thought that the labourers should be taught a lesson. The labourers water supplies were cut off and the supply of rice stopped. That was certainly an act of inhumanity calculated to break the morale of the labourers"

Menon went on, " The question of wages was one of the grievances. They had other grievances too. For instances, tappers who had been doing a normal day task were compelled to do extra work without extra remuneration. Their children were forced to work for nominal wage and any refusal the parents were punished"

The milk supplies to infants were discontinues and hospital arrangements were unsatisfied on some estates. In short, life become almost intolerable under such conditions. In adding to these labourers were not allowed to wear Gandhi caps and were expected to alight from their bicycles if they happened to meet their European employers.

"The arrest of Mr. Nathan, President of the Indian Klang Union was naturally interpreted by the labourers as an attempt on the part of the Government to suppress the growing union among the labourers and this was followed by further strikes . The estate management got panicky and demanded Government to suppress it. The demand was promptly and amply answered. The police were on the scene followed by military. A cordon was formed and nobody was allowed to pass it. Even the Indian Agent had difficulty in getting in the cordon"

"There was no denying the fact that there was some violence - whether provoked or unprovoked and cone could expect a crowd of 16,000 to 20,000 labourers labouring under grievances to behave like Sannayasins (saints)."

"Was it not possible to disperse the crowd without resort to shooting? Was there any necessity to use the military at all? Those were the questions they should ask themselves. They did not ask for a magisterial enquiry but a public enquiry."

The resolution is seconded by Mr. S.K Das who pointed out that a magisterial enquiry would be quite useless in so far it would confine itself to the caused of death.

An amendment by Mr. Namazie to the effect that the meeting should approach the High Commissioner asking him to take early steps to implement his promise by appointing a committee to enquire into the matter did not find favour with the meeting.

Mr. Adithan who seconded the amendment pointed out that the original motion appeared to him to prejudge and assume certain things. The fact remained that here was a strike. What they now wanted was an enquiry. His Excellency had promised it and they would simply ask him without prejudging anything to fulfil his promise.

Further, the Hight Commissioner had promised to go into the strikers grievance and being so, could they not wait a little and bring forward the resolution some time later?

Jumabhoy's resolution was put to vote and lost.

The original motion of KPK Menon was then put to vote and carried by an overwhelming majority. 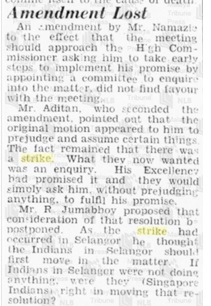 Posted by Saminathan Munisamy at August 13, 2021