Based on details found in the Report of the Nethaji Inquiry Committee in 1956, I made an entry to my blog in June 2011, with a presumption that S.A Ganapathy could have delivered the news of Japan surrender to Bose. The article mentioned that one "Mr. Ganapathy" and Dr.Lakshmayya left Singapore with the devastating news. The men broke the news to Bose and his trusted officer S.Ayer in Seremban.

The article indicated that "Mr Ganapathy" was the Acting Secretary of the Publicity Department of India Independence League (ILL) headquartered in Singapore.

As the article did not mention any details of "Mr Ganapathy", premature assumption had been made that S.A Ganapathy would have delivered the message. The colonial papers reported that S.A Ganapathy was serving as an instructor with Indian National Army (INA).

But, a news appeared in The Indian Daily Mail on the 8th April 1946, proves that the presumption was wrong. The news confirms that the said "Ganapathy" was K.E Ganapathy.
The news which generally discussing the mysterious death surrounding Bose, mentioned that the  Malayan Tamil Newspapers reported that Bose was heard broadcasting from Manchuria on the March 17, 1946.

K.E Ganapathy who traveled from Penang produced the Tamil newspaper in Madras and said, "Subhas Chandra Bose is in Manchuria and is doing well"

With this, it is clearer now that S.A Ganapathy did not break the news of Japan surrender to Bose. It was K.E Ganapathy!

Many had taken this presumption (even though I have stated my reservation on the "Ganapathy" in article) and reproduce it in their presentations, speeches and articles that S.A Ganapathy was the person who broke the news to Bose. This was done in the context to project how close was Ganapathy to Bose.

This new evidence shows that Ganapathy was not given a high rank in Indian Independence League (ILL) nor Indian National Army. It is also evident the truth in the confession made by an ex INA member, Sutharman, that Ganapathy was court-marshaled in INA for being a communist.

Intelligent report stated that Malayan Indians from Malayan Communist Party (MCP) infiltrated INA and there was an unique relationship established between the MPAJA and INA. MCP sympathized INA's anti British struggle and wanted to form an alliance with INA after the Japan's defeat. But this alliance was betrayed by a high ranking officer in INA upon advised by the British (see my blog entry on R.G Balan) 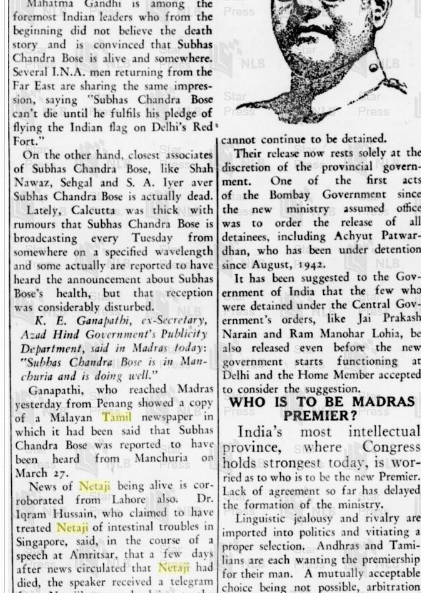