The Secretary of States for the Colonies, Arthur Creech Jones has written to High Commissioner of Malaya, Sir Henry Gurney on the 9th May 1949 at 2315hrs explaining situation post Ganapathy's execution in India where Nehru is being heavy criticised by the Left-wing for his policy of free association with the Commonwealth.

According to Jones, the execution of Ganapathy “came at a most inappropriate moment” and putting Nehru and his Congress in wrong limelight.

Nehru was scheduled to speak to the Parliament on the 16th May 1949 on the outcome of Prime Minister Conference, where India's participation in Commonwealth accepted despite being a republic nation. Nehru is in a dire state to prove to the parliament that efforts have been taken to save another Indian who is waiting to be hanged - Sambasivam

The Secretary of States for the Colonies requesting Gurney to look into Sambasivam’s case as Indian government has made representation to the British government through their High Commissioner in UK – Krishna Menon.
With taking into constitutional difficulties in Malaya (where the prerogatives to pardon an accused vested with Sultan) Creech Jones requesting Gurney to advise the Sultan to give a full weight in the case of Sambasivam for the consideration of granting reprieve.

Sambasivam was a clerk of Rubber Worker Union Segamat in Johor. He was arrested on the 13th September 1948 at Bukit Kepong, Johor. At the time of his arrest he was in the company of two Chinese who were armed. In fight broke between groups of three Malays armed with knives (parangs) with the Chinese. Sambasivam was seriously wounded. One of Chinese was killed and other Chinese escaped. The arms including a revolver (the subject of the charge in his case) were recovered at the scene.

Sambasivam was discharged from hospital on 28th February 1949 when he was brought to trial at the Johor Supreme Court on the 2nd and 3rd March 1949 for unlawfully carrying arms. The assessors found him not guilty but the trial judge disagreed and orders a retrial.

In the retrial which took place on 22nd March 1949, he was convicted by both assessors (a Malay and an Indian) and found guilty. He was sentenced to death.

The court of Appeal dismissed his appeal on 28th April 1948. All the three Appeal Judges (including the Chief Justice) agreed with the Trial Judge. The execution was decided to take place on the 4th June 1949.

Thivy took enormous efforts to save Sambasivam by pursuing Sambasivam in person to sign the application for leave to appeal to the Privy Council on the 3rd of June 1949 - a day before his execution. 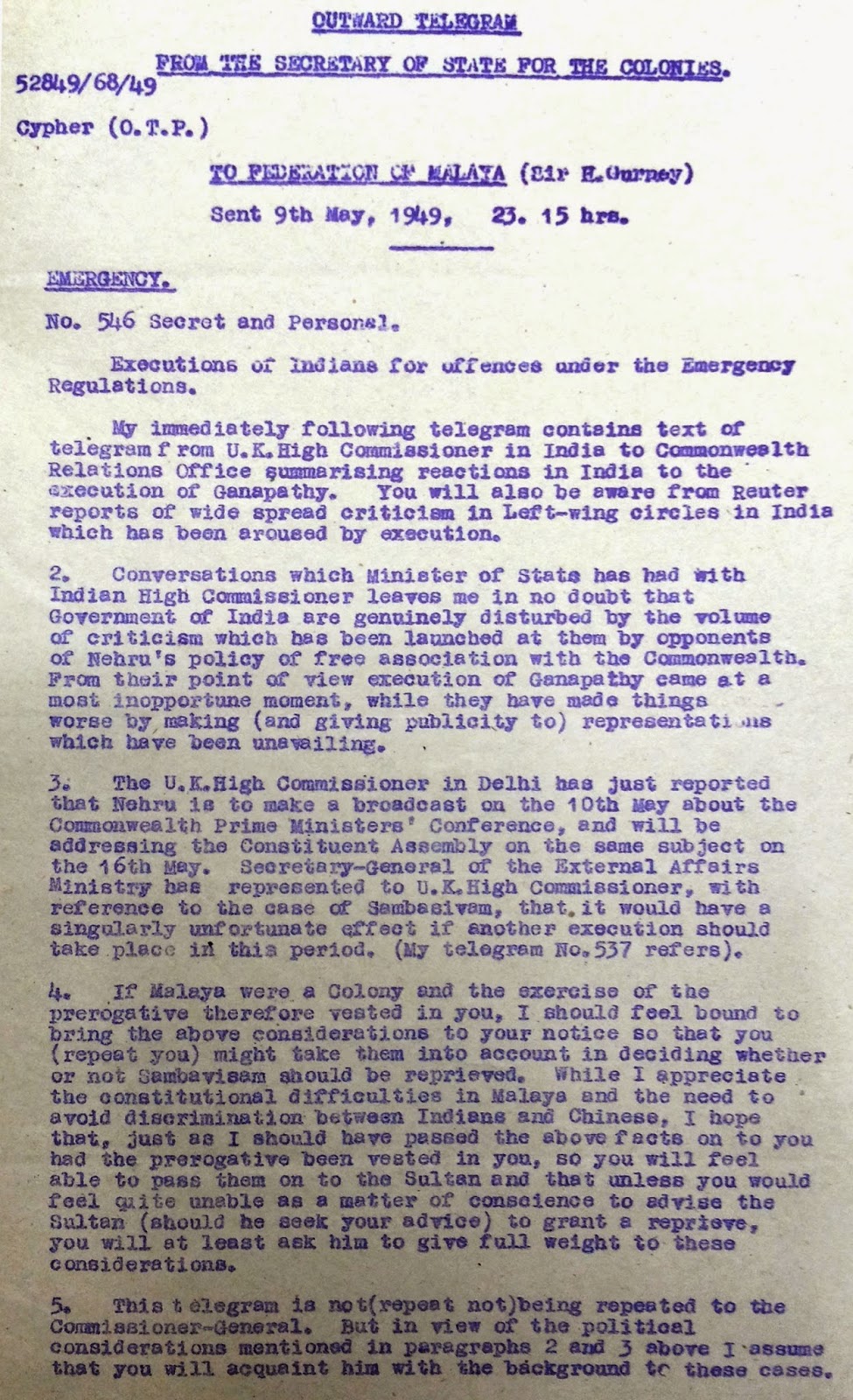 Posted by Saminathan Munisamy at February 11, 2015