One of the paramount labour struggles against oppressive planters and always been regarded as an uprising among labourers in Malaya was the 1941 Klang Strike.

I would like to pen down a few details of events which unfolded along the struggle, on the individuals who involved in the strikes and what were the pushing factors behind it. And also what was the reaction of daily mails in Malaya that time – both English and Tamil.

Interestingly many have written on Klang Strike but they were not widely discussed as many considered this as an agitation caused by Indians over poor wage issues. According to may scholars the strike is "one of the largest, best organised and most militant strike by Indians workers which Malaya had ever seen" (Tai Yuen - Labour Unrest in Malaya 1934-1942)

Around 20000 estate Indian labourers from 100 over estates involved. The government and its agencies which have been in favour of the planters decided to flex their muscles to teach the labourers a lesson - “not to ever and ever go against their master!”. Huge police force coupled with military personnel was used to curb the strikes resulted four deaths, hundreds injured, arrested and detained. Many were deported including the so called the master mind of the unrest– RH Nathan, who strike fear in the hearts of planters.

The strike ended with 6 workers dead, 21 deported and 95 accepting volunteer repatriation. Of the 300 arrested and imprisoned, 186 were subsequently released on condition that they did not return to the estate where they were employed once. The Klang District Indian Union was deregistered. (Tai Yuen - Labour Unrest in Malaya 1934-1942)

John Tully in his book "The Devil's Milk" gave a detail insight of the unrest.

The Klang Strike was said to be started when a stoppages began at the Damansara Estate, on March 17, 1941 when four laborers were arrested for allegedly intimidating the others into ceasing work.

As a Colonial Office report noted, there were actually two consecutive strike waves. The first broke out early in the year and was inspired by the desire for parity in wage rates with Chinese plantation workers and by widespread resentment that despite a vast increase in profits since the Depression, wage cuts had not been restored.

The synchronicity of the strikes with similar demands was made possible by the formation of a new illegal workers’ organization, the Klang District Indian Union, by two “agitators” called Y.K Menon and R. H. Nathan (whom the British described as members of the Indian National Congress with “strong socialist sympathies”). Further support came from the Indian Communist R. K. Thangaiah and the CIAM’s Mr. N. Raghaven. The strikes were successful in that the Indian laborers were granted a general wage increase to sixty cents a day for men and fifty cents for women, although this still fell short of the rates paid to their Chinese counterparts.

The second wave broke on April 16 and was not directly wage-related. The Colonial Office considered the motives political and that, the underlying cause of the strikes was probably the fact that the earlier strikes had given the labourers an idea of their power and their victory had gone to their head. The workers demanded the right to wear “Gandhi hats” and fly Congress flags in their compounds, and wanted the abolition of the custom of coolies having to dismount from their bicycles if they met a planter’s car on the roads.

Such “insolence” outraged the High Commissioner, Sir Shenton Thomas, who told CIAM leaders, “the strike was a disgrace to the Indian community” and a “politically inspired . . .challenge to authority.” Nevertheless, Thomas downplayed the significance of the affair by claiming that “the men will soon get tired of the new fashion” of Gandhi caps. Sounding like the Wodehouse character Bertie Wooster, he claimed, “It is the custom of India to dismount from a bicycle when meeting a superior . . . just as we take off our hat to a lady.”

Arguably, the laborers were demanding to be treated with respect, and this collided with the racist stereotyping common among planters and British officials. Puzzled that “their” Tamils had become unruly, the British police blamed the whole situation on “agitators.” They reasoned, “if they could get rid of them, the rest of the labour force would be perfectly contented.”

High Commissioner Sir Shenton Thomas ordered the arrest of Nathan and Thangaiah, whom he blamed for leading the Tamils astray. In the monochrome world of racial stereotypes common to men of Thomas’s rank and class, it was inconceivable that “the mild Hindu” could act without outside influence. There is evidence that he had already decided to arrest the agitators before the start of the second wave of strikes but was waiting for the most opportune moment to act and thus behead the strike movement. The laborers, however, were incensed by the arrests, which added to their growing list of unresolved grievances. After his deportation to India, Nathan listed the strikers’ demands as follows:

1. Pay parity between Indian and Chinese [laborers]
2. Removal of “brutal” Ceylonese and Malayalee staff and replacement with Tamils
3. Proper education for children
4. An end to the molestation of laborers’ womenfolk by Europeans and “black” Europeans
5. Proper medical facilities
6. Closing of toddy shops
7. Freedom of speech and assembly
8. Free access to estates for family and friends
9. Laborers to remain mounted on bicycles in front of European and Asian staff
10. Abolition of 10–12-hour days
11. No victimizations
12. Permission to form associations to represent their interests
(taken from Chapter 16 - Coolie Revolt - The Devil's Milk by John Tully)

On the 14th May 1941, The Straits Times reported that the situation in estates in Selangor and around Kuala Lumpur is worsening as the wave of strikes spreading. It has been reported, agitators have peddling bicycles working their way from one estate to another estate in Kuala Lumpur resulting to 27 estates on strike.

On the 13th May, 30 labourers from Banting have been charged in Klang Court and remanded. 16 agitators have been detained at Bukit Darah Estate.

The labourers on Effingham Estate and Seventh Mile Estate on the Old Damansara Road have gone out on strike.

A Tamil, Sithambaram was charged in court for intimidation.

The High Commissioner, Sir Shenton Thomas had met with the government officials and UPAM's president S.B Palmer to discuss matters arsing from the labour unrest.

The British Resident of Selangor has called out the European Company of 2nd Battalion Federated Malay State Volunteers to patrol the road in the vicinity of Kuala Lumpur.

Please note the selection of words used by The Straits Times's editor - gangs of intimidators and agitators. Also interested that labourers have been using bicycles to mobilise their strength. 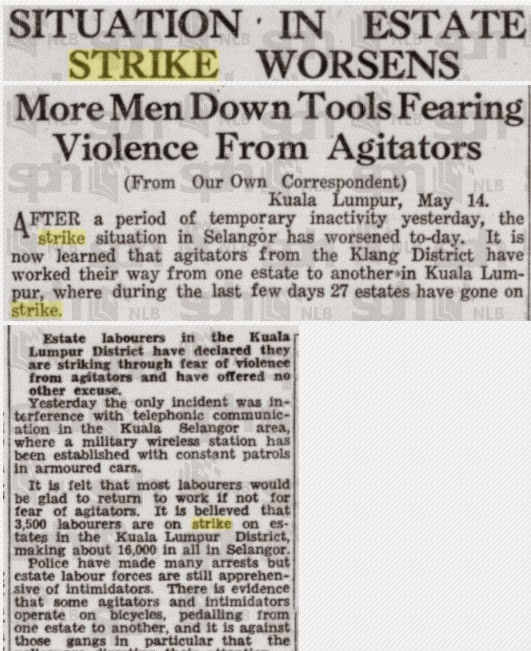 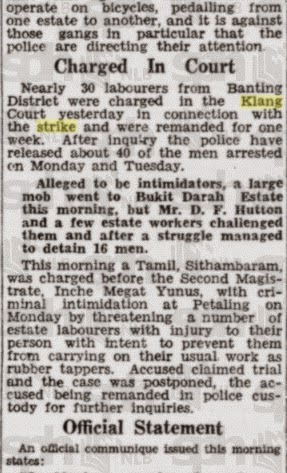 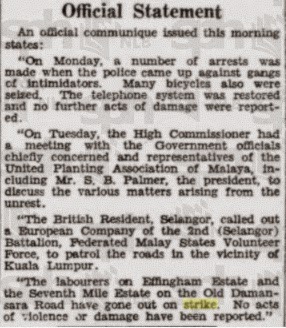 Posted by Saminathan Munisamy at February 05, 2015