Ganapathy was Not the First and Last Indian Sent to Gallows

During the Emergency, it is a known fact that many were given death penalty for illegal possession arms. Many of them were Chinese from the Malayan National Liberation Army (MNLA) and labour unions front. There were a few Malays who have been hanged for same offense. It has been widely spoken by many Malaysian Indians that S.A Ganapathy was the only Indian sentenced to death for arm possession and another Indian, Sambasivam, sentenced to death for the same offense has been saved by Indian government. This is to prove how determined were the Indian leaders to save every Indian subjected to death penalty in Malaya.

The Straits Times on the 22nd February 1951, reported that an Indian, Karrupiah was sentenced to death at the Johore Assizes for being a bandit agent and collector. Attempts were made by Indian Government to save Karrupiah through Privy Council after his appeal was rejected in Federal Court of Appeal.

Details of Karrupiah's case nor his background remains unknown. 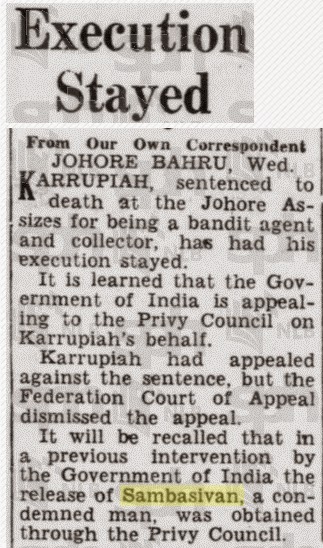 Posted by Saminathan Munisamy at February 12, 2015