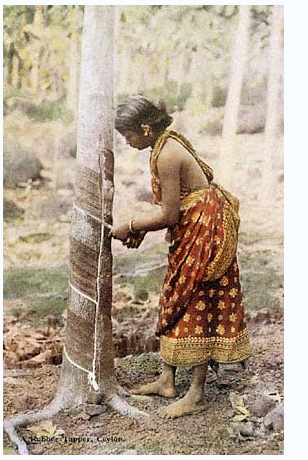 One of the important labour strikes which saw involvement of A.M Samy's Thondar Padai was the "Kedah Strike" which took place at Bedong, Kedah.

A.M Samy, instrumental for the formation of Thodar Padai – the Volunteer Corp. The Thondar Padai members who were mainly ex-members Indian National Army (INA) had firsthand experience in seeing the defeat of the British Empire in the hands of Japanese Imperial Army during the World War II. The anti-imperialism mindset left by Bose made Thondar Padai raised with confidence against the atrocities of British planters.

In the Forgotten Wars- The End of Britain's Asian Empire, Christopher Bayly and T N Harper :

"In February 1947, a crowd of a thousand or so Thondar Padai descended on Bedong, only to be confronted by police. A labourer came forward: We are not anti government,' he cried, 'We are only against the drinking of toddy." He was clubbed to the ground and later died in hospital. The coroner recorded a death of 'justifiable homicide.' A series of protest strikes erupted in the area. At Bukit Sembilan estate on 3rd March 1947 trouble was triggered by dismissal of a woman activist, and police faced orchestrated resistance. "Women were to be forefront armed with pepper." it was reported; "boiling water was kept ready; men were to be armed with sticks, stones and bottle full of sand, trees were to be cut down make roadblocks." Sixty-six people were arrested, and all but 2 women of them sent to jail after a trial that lasted only a day. Fearing a rescue attempt, the police closed hearing to public. An investigation by the Malayan Indian Congress revealed collusion and premeditation on the part of local planters and police, S.K Chettur claimed that women were beaten and there were allegations that two young girls were raped in custody. Condition at Bukit Sembilan estate were particularly dire: the only supply of water came from ravines and labourers shared it with their cattle; the manager has their water brought from town lorry. The strikers' demand focused on wages and family needs, such as creches (day care centres), better housing and equal pay for women. But the real source of anger was the summary dismissal of workers: "Managers feel that because we reside on the estate we are as much as their property as rubber tress." 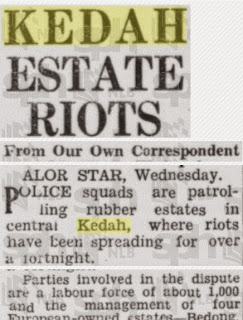 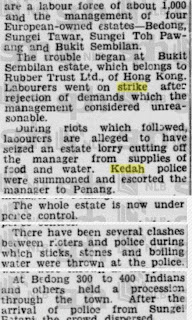 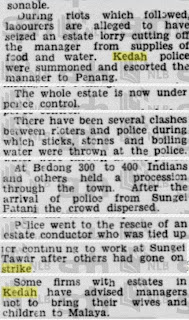 Kedah Estate Riots
(From Our Correspondent)


Police squads are patrolling the rubber estate in central Kedah, where riots have been spreading for over a fortnight.

Parties involved in the dispute are a labor force of about 1000 and the management of four European-owned estates – Bedong, Sungai Tawar, Sungai Toh Pawang and Bukit Sembilan.

The trouble began at Bukit Sembilan estate which belongs to Rubber Trust Ltd., of Hong Kong. Labourers went on strike after rejection of demand which the management consider unreasonable.

During riots which followed, labourers ware alleged to have seized an estate lorry cutting off manager from supplies of food and water. Kedah police were summoned and escorted the manager to Penang.

The whole estate is now under police control.

There have been several clashed between rioters and police during which sticks, stones and boiling water were thrown at the police.

At Bedong, 300 to 400 Indians and others held a procession through the town. After the arrival of police from Sungai Patani, the crowd dispersed.

Police went to the rescues of an estate conductor who was tied up for continuing to work at Sungei Tawar after others has gone on strike.

Some firms with estates in Kedah have advised managers not to bring their wives and children to Malaya.

Further research into this intriguing Bukit Sembilan incident where a young dresser who seized a lorry carrying water to the manager's residence, I came to know that the person's name was Paliah (பாலையா) from Bukit Sembilan Estate. Interestingly, the Straits Times dated 18th August 1947 (page 5) also named Paliah as the person who led the strike against oppressing estate manager who denied labourers access to clean water. Paliah was detained and sentenced two weeks of rigorous imprisonment (The Straits Times - 27th August 1947) for restraining officer J.M MacLean, OCPD of Sungai Petani in executing his duty. 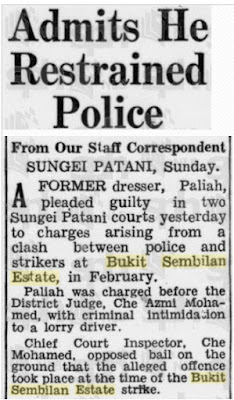 "Paliah..we may have forgotten your name, but not your fighting spirit"
Posted by Saminathan Munisamy at July 16, 2014