From "Pan Malayan Labour Union for All Nationalities" to PMFTU

Came across this notice which was published in The Straits Times - 19th February 1947, more information of the union brought to light:

1. After the PMFTU Conference meeting on the 7th February 1947, the original name of the union was changed from "The Pan Malayan Labour Union of all Nationalities” to “The Pan Malaya Federation of Trade Unions,”

2. With effective of 22nd February 1947, new union's logo implemented with inscribed in the fours language, English, Indian, Chinese and Malay.

3. The head office in Kuala Lumpur was at No.85-C High Street and the Branch Office in Singapore was at Singapore No.56, Short Street.

This is to inform the public that following the close of the 2nd Session of the Pan Malayan Trade Union Conference, it was accordingly resolved to change our original designation of “The Pan Malayan Labour Union of all Nationalities” to “The Pan Malaya Federation of Trade Unions,” Thereby please take note that as from the 22nd February 1947 only those documents (with the exception of the receipts to our newspaper “The Vanguard”) endorsed with new seal, round in shape, with gears at the edge, the emblem of our Federation enclosed within and with designation inscribed in the following fours language, English, Indian, Chinese and Malay are valid.

Henceforth all communication should be directed to the General Secretary of Head Office at Kuala Lumpur No.85-C High Street or the Branch Office at Singapore No.56, Short Street where all business shall be dealt with similarly.

We take this opportunity to thank the Selangor Public Market Association and other Organization for the loan of their premises and all those who contributed to the success of the Conference. 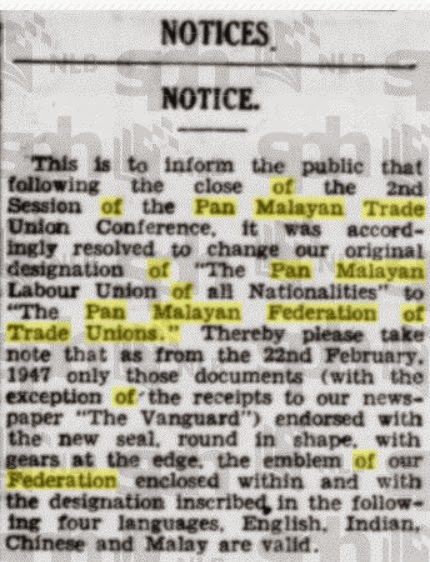 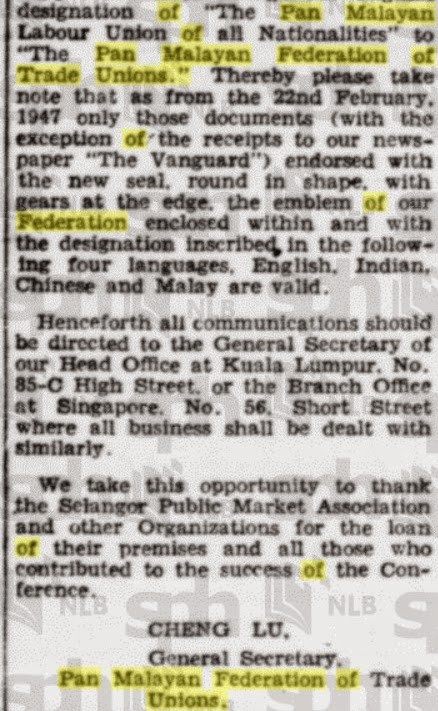