President of Indian Congress - Not to Trust the Commonwealth

Indian Daily Mail, Saturday - 7th May 1949 carried an uproar by President of Indian Congress, Dr. Pattabhi Sitaramayya urging India "to not to trust too much on Commowealth ties". The satisfaction was due to British's blunt ignorance over India's protest over the death sentence given S.A Ganapathy in March 1949.

This clearly shows that there were attempts made by the Indian Government save Ganapathy. But, why these attempts ended in failure and what would cause this failure still remains unanswered. 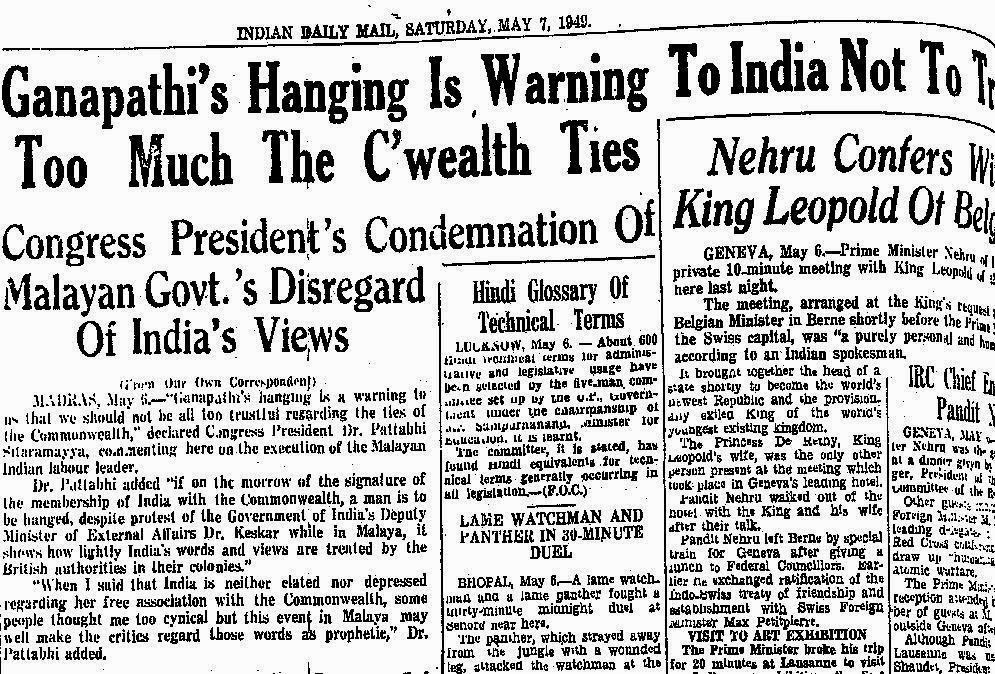 Congress President’s Condemnation of Malayan Govt.’s Disregard Of India’s Views
(From Our Own Correspondent)

MADRAS, May 6 – “Ganapathi’s hanging is a warning to us that we should not be all trustful regarding the ties of the Commonwealth,” declared Congress President Dr.Pattabhi Sitaramayya, commenting here on the execution of the Malayan Indian labour leader.

Dr. Pattabhi added “if on the marrow of the signature of the membership of Indian with Commenwealth, a man is to be hanged, despite protest of the Government of India’s Deputry Minister of External Affairs Dr. Keskar while in Malaya, it shows how lightly India’s words and views are treated by the British authorities in their colonies.”

“When I said that India is neither elated not depressed regarding her free association with Commonwealth, some people thought me too cynical but the event in Malay may well make the critics regards those words as prophetic.” Dr.Pattabhi added.
Posted by Saminathan Munisamy at May 26, 2014