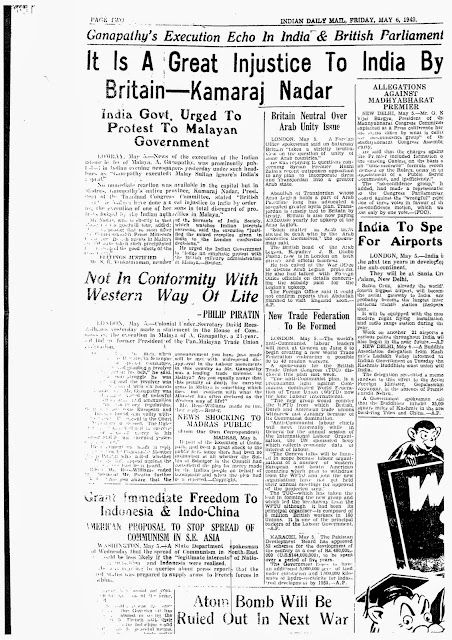 (My apologies as the copy kept in National Library Singapore was not very clear. But I did my best to extract as much as possible from the copy)

The first portion for the page covered the remarks given by Kamaraj Nadar President of Tamilnadu Congress over the execution of Ganapathy. This could be one of the earliest comments given by Indian leaders on Ganapathy’s death. This may one of the reasons strong protests were filed by Indian government against British administration in Malaya.

“British govt in Malaya have done a great injustice to India by ordering the execution of one of her sons in total disgraced of protest lodged by the Indian authorities in Malaya.” – Kamaraj President of TamilNad Congress.

The second portion covered the news of Philip Piratin questioning Colonial Under-secretary David Rees-Williams in the House of Common on the consequences of Ganapathy’s hanging.

The third news in the page was about shock among Indians in India over the execution of Ganapathy. Definitely the British administration in Malaya kept the Indian leaders in India through formal correspondents over the development in Ganapathy’s case. But surely, Indians in India were not kept informed of the plea for mercy made by Indian people on behalf of Ganapathy to the Sultan of Selangor.

It Is A Great Injustice To India By British – Kamaraj Nadar
India Govt. Urged to Protest to Malayan Government

BOMBAY May 5- News of the executed of the Indian labour leader of Malaya A. Ganapathy, was prominently published in Indian evening newspapers yesterday under such headlines as “Ganapathy executed: Malay Sultan ignores India’s appeal”

No immediate reaction was available in the capital but in Madras, Ganapathy’s native province, Kamaraj Nadar, President of the Tamilnad Congress Committee, stated, “British govt in Malaya have done a great injustice to India by ordering the execution of one of her sons in total disgraced of protest lodged by the Indian authorities in Malaya.

Mr. Nadar who to shortly to visit Malaya in a goodwill tour, added: "It is surprising that so soon after the Commonwealth Prime Ministers Congress British agents in Malaya should have taken such precipitated action spoil the good effects of the conference”

Mr. S.R Venkataraman, member of the Servants of India Society which watches Indian interest overseas, said the execution “justified the mixed reception given in India to the London Conference decisions”

He urged the Indian Government to lodge an emphatic protest with the British military administration in Malaya –Reuter.
Not In Conformity With Western Way of Life – PHILIP PIRATIN

LONDON, May 5 – Colonial Under-secretary David Rees-Williams yesterday made a statement in the House of Commons on the execution in Malaya of A.Ganapathy, a 21-years old Indian former President of Pan-Malayan Federation of Trade Unions.

(Not Clear)
When Mr. Rees-Williams ended his statement Mr.Piratin further asked, “Are you aware that the announcement you have just made will be met with widespread disapproval in the labour movements in this country as Mr.Ganapathy was a leading trade unionist in Malaya? Are you equally aware that this penalty of death for carrying arms in Malaya is something which does not conform with what the Minister has often declared as the western way of life?”

Mr. Piratin
asked the Secretary of State for the Colonies whether the appeal by Mr. Ganapathy against sentence of death in Malaya has been heard; and if he will make a statement.

Mr. Rees-Williams
On 1st March last this man, when challenged near Rawang in Selangor by a party of special constables, showed fight and grabbed a revolver which he had in his belt. After a short struggle he was overpowered, and the revolver was found to be loaded with six rounds of ammunition. Mr. Ganapathy was charged and convicted of unlawful possession of arms and ammunition under the Emergency Regulations. Both assessors (one European and one Indian) found him guilty without retiring. His appeal to the Court of Appeal was dismissed. The Ruler in Council has declined to exercise the prerogative of mercy in his favour, and he was executed this morning.

Mr. Piratin
Is the Minister aware that the announcement he has just made will be met with widespread disapproval in the Labour movement in this country as Mr. Ganapathy was a leading trade unionist in Malaya; and, further, is the Minister equally aware that this penalty of death for the carrying of arms in Malaya is something which does not conform with what he has often declared is the Western way of life, and will he therefore remember what he previously said in this particular matter?

NEWS SHOCKING TO MADRAS PUBLIC
(From Our Correspondent)

MADRAS May 5 – Report of the execution of Ganapathy had been a great shock to the public here since there had been no information at all whether the Sultan of Selangor in the Council had considered the plea for mercy made by Indian people on behalf of Ganapathy and when the plea had been rejected.
Posted by Saminathan Munisamy at October 25, 2013