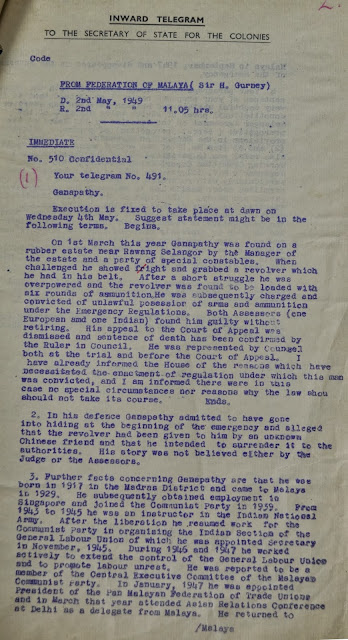 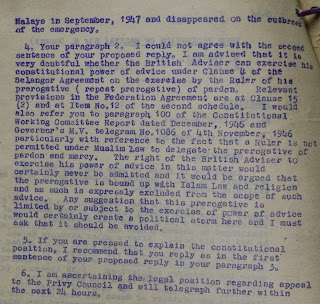 Execution is fixed to take place at dawn on Wednesday 4th May. Suggest statement might be in the following terms. Begins.

On the 1st March this year Ganapathy was found on a rubber estate near Rawang Selangor by the Manager of the estate and party of special constables. When challenged he showed fight and grabbed a revolver which he had in his belt. After a short struggle he was overpowered and the revolver was found to be loaded with six rounds of ammunition. He was subsequently charged and convicted of unlawful possession of arms and ammunition under the Regulations. Both assessors (one European and one Indian) found him guilty without retiring. His appeal to the Court of Appeal was dismissed and sentence of death has been confirmed by the Ruler in Council. He was represented by Counsel both at the trial and before the Court of Appeal. I have already informed the House of the reasons which have necessitated the enactment of regulation under which this man was convicted, and I am informed there were in this case no special circumstances nor reasons why the law should not take its course. Ends

2. In his defence Ganapathy admitted to have gone into hiding at the beginning of the emergency and alleged that the revolver had been given to him by an unknown Chinese friend and that he intended to surrender it to the authorities. His story was not believed either by the Judge or the Assessors.

3. Further facts concerning Ganapathy are that he was born in 1917 in the Madras District and came to Malaya in 1929. He subsequently obtained employment in Singapore and joined the Communist Party in 1939. From 1943 to 1945 he was an instructor in the Indian National Army. After the liberation he resumed work for the Communist Party in organizing the Indian Section of the General Labour Union of which he was appointed Secretary in November, 1945. During 1946 and 1947 he worked actively to extend the control of the General Labour Union and promote labour unrest. He was reported to be a member of the Central Executive Committee of the Malayan Communist Party. In January, 1947 he was appointed President of the Pan Malayan Federation of Trade Unions and in March that year attended Asian Relations Conference at Delhi as delegate from Malaya. He returned to Malaya in September, 1947 and disappeared on the outbreak of the emergency.

4. Your paragraph 2, I could not agree with the second sentences of your proposed reply. I am advised that it is very doubtful whether the British Adviser can exercise his constitutional power of advice under Clause 4 of the Selangor Agreement on the exercise by the Ruler of his prerogative (repeat prerogative) of pardon. Relevant provisions in the Federation Agreement are at Clause 15 (2) and at item No.12 of the second schedule. I would also refer you to paragraph 100 of the Constitutional Working Committee Report dated December, 1946 and Governor‘s M.V telegram No.1086 of the 4th November, 1946 particularly with reference to the fact that a Ruler is not permitted under Muslim Law to delegate the prerogative of pardon and mercy. The right of the British Adviser exercise his power of advice in the matter would certainly never be admitted and it would be argued that prerogative is bound up with Islam law and religion and as such is expressly excluded from the scope of such advise. Any suggestion that this prerogative is limited by or subject to the exercise of power of advice would certainly create a political storm here and I must ask that that it should be avoided.

5. If you are pressed to explain that constitutional position, I recommend that you reply as in the first sentence of your proposed reply in your paragraph 3.

6. I am ascertaining the legal position regarding appeal to the Privy Council and will telegraph further within the next 24 hours.

Gurney wrote this letter to Rees Williams (Secretary of State for the Colonies) on 2nd May 1949, two days before Ganapathy to be hanged.

In the letter, Gurney reconfirmed the status of the case where the date 4th May 1949 would be the execution date for Ganapathy. Further, he re-established a brief history of Ganapathy and his involvement in CPM and his representation to the Asian Relations Conference at Delhi in March 1947. It is quite interesting to know that he had only returned to Malaya in September 1947. There was an account by Abdullah CD in his memoir that he and Ganapathy had toured India especially Tamil Nadu meeting local leaders. Abdullah stated that there was warm welcome for Ganapathy who was celebrated as a national hero especially in Tamil Nadu. This visit would have created an impact among the Indian leaders in India. Upon learning Ganapathy was hanged, may Indian leaders were furious and disappointed with British administration in Malaya. Example, the Indian Socialist Party went to the extent to pressure Indian Government to stop their aid to Malaya (reported in Daily Indian Mail- 7th May 1949)

Another interesting point is the prerogative rights of the Ruler to pardon. Gurney stated that “Ruler is only permitted under Muslim Law to delegate the prerogative of pardon and mercy” with reference made to Federation Agreement Clause 15 (2) and item No.12 of the second schedule, Paragraph 100 of the Constitutional Working Committee Report dated December, 1946 and Governor‘s M.V telegram No.1086 of the 4th November, 1946.


If the Sultan would only exercise his rights in accordance of the Islamic law in the country, then why Kamarulzaman Teh has committed the offense - arms possession - was granted pardon from his royal majesty of Pahang? (Remember that the constitution only permits Sultan to interfere in the customary Malay rules and Islamic Law. Accusation of possessing arms or ammunition is a criminal offense not related to Malay customary rules and Islamic Law)

In the case of Sambasivam, for the same offence, why matter was referred to the Sultan of Johor to grant reprieve?
Please note also Gurney’s ultimatum that there shall be a serious repercussion of “political storm” if British Adviser would go out of his “scope” in advising the Sultan in the case of Ganapathy.

And in the last para, Gurney ascertained that he will be looking into “legal position regarding appeal to the Privy Council” which sounds very fishy as it was coming from a person who determined to "put off" Ganapathy and unrest among labours in Malaya. Or this could be also a sincere intention from a gentle man or could be another eye-wash attempt to prove that all possible aspects and ways of legality to save Ganapathy were carried out (in case the matter to be dig-out for investigation in future). This phrase sounded like crocodile tears to me rather than a sincere effort from a High Commissioner to save a prominent unionist.

Based on my previous findings, John Thivy was involved in Ganapathy’s appeal. But still remains a puzzle why Privy Council was not engaged. Why Thivy was not involved in engaging the Privy Council as in Sambasivam's case? Why the fate of Ganapathy was left in hands of British who determined to put him off?

Did the British trick Thivy? Or Thivy could make to believe that fair justice will be served in Ganapathy case as the Brits were known for upholding justice?

Under any of these circumstances, Thivy could have learned his lesson that putting his countrymen’s faith in hands of Brits could prove fatal. Therefore, Thivy took enormous efforts to save Sambasivam’s life by pursuing Sambasivam in person to sign the application for leave to appeal to the Privy Council on the 3rd of June 1949 (one day before his was about to be hanged). The Straits Budgets reported this under headline “Sambasivam Case - Move to Appeal to Privy Council” – dated June 1949.
(Extracted from The Straits Times - June 1949

Move to Appeal To Privy Council

From Our Staff Correspondent

The execution of Sambasivam, former secretary , it is understood, of the Rubber Workers’ Union in Segamat which was to have taken place at Johor Bahru prison tomorrow morning, has been stayed by his action in giving notice of an application for leave to appeal to the Privy Council.

Sambasivam is under sentence of death imposed under the Emergency Regulation for carrying arms.

The stay of the action was granted automatically last night after Sambasivam had signed the application for leave to appeal presented to him in the prison by Mr. John Thivy, the Representative of the Government of Indian in Malaya.

The notice was immediately served on the Mentri Besar of Johore, Dato Onn bin Ja’afar. The superintendent of the prison, the Legal Advisor and the Registrar of Supreme Court here and copies were sent to the High Commissioner, Sir Henry Gurney and the Chief Secretary Sir Alec Newboult.

Mr. Thivy, who appeared tired out this morning, told the straits Times that he had not seen the High Commissioner since middle of last month although there had been frequent telephoned calls and correspondence.

He was in Kuala Lumpur on Tuesday finalising documents that then went down to Johore.

He said that the Indian government had taken the cost of Sambasivam appeal and had engage solicitors locally and in London.

The Indian High Commissioner in London would watch the case there. There was no indication as to how long it would take before the Privy Council heard the application for leave to appeal.

Mr.Thivy said that the appeal was beads on points of law. When he saw him in prison Sambasivam was still weak from wounds received in the skirmish at the time of his arrest.

The case of Sambasivam gained further publicity last month after the execution of Ganapathy former President of PMFTU and the representation made by the Indian Government through Mr.Thivy to secure reprieve.

Posted by Saminathan Munisamy at September 30, 2013