On the 2nd April 1949, almost one month before the execution of S.A Ganapathy, The Strait Times published this article: 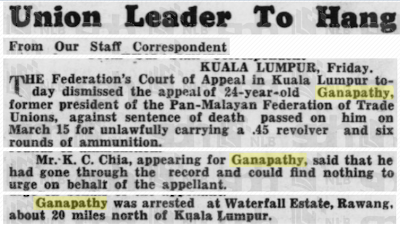 Union Leader To Hang - From Our Staff Correspondent

Kuala Lumpur, Friday, - The Federation's Court of Appeal in Kuala Lumpur today dismissed the appael of 24-year-old Ganapathy, former president of the Pan Malayan Federadion of Trade Unions, againts sentence of death passed on him on March 15 for unlawfully carrying a .45 revolver and six rounds of ammunition.

Mr.K.C Chia, appearing for Ganapathy, said that he had gone through the records and could find nothing to urge on behalf of the appellant.

Ganapathy was arrested at Waterfall Estate, Rawang about 20miles north of Kuala Lumpur.

As I have posed earlier that all these happened within 3 months.

But, there seems to be an interesting fact surfaced here as one K.C Chia was appeared for Ganapathy. Who is this K.C Chia? I done a search under this name in the website directories of Malaysian Bar Council but no luck in finding more details on this lawyer. Nor any case files on Ganapathy! I heard from a reliable sources that Ganapathy's files could have been moved to Colonial Office in London or Australia.

It was made known from the news above the detail of the revolver that was in Ganapathy's possession, even though Ganapathy had confessed to his brother, Sarkunan, a few days before his execution that he had no weapon with him during the arrest on the 1st March 1949.

In my earlier posting, in an interview with Mr Sudharman, the Commandant of 7th Regiment of Malayan National Liberation Army (MNLA), who denied the allegation that Ganapathy would have been captured with a weapon. As one of the important figures in MCP, Ganapathy would have been protected by bodyguards. There would not be any necessity for Ganapathy to carry a revolver. This shall make us to wonder further the reasons behind his visit to Waterfall Estate on the fatal day of 1st March 1949 without being accompanied by any bodyguards.

Waterfall Estate situated around 12km from Rawang and around the same distance from Batu Arang where "Reds" were very much active. Ganapathy said to have been meeting his cadre and union leaders like V. Ramasamy in Batu Arang during that time.

I was not able to get a photograph of the revolver as its manufacturer and model number were not mentioned. But, I presume the revolver to be Webley MK6 Revolver .45 Caliber, which was also widely used by the Police and Auxiliary Force (Home Guards) during Emergency. 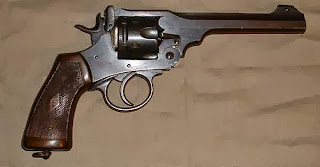 Another puzzling issues will be the role that John Thivy would have played. We understood earlier that Indian Government Representative to Malaya, Thivy,  was well informed of the case and he was said to have been handling legal aspect of the case. But, his name was not mentioned here in the news unlike in Sambasivan's case where John Thivy played a vital role to get Sambasivan off the hook especially his efforts in engaging Privy Counsel.
Posted by Saminathan Munisamy at September 25, 2013