Nehru Sold the Nation by Joining the Commonwealth - CPI

Questions raise why India kept her efforts not focused and intense in Ganapathy's case. But we see the efforts intensified in the case of Sambasivam. For the first time after Ganapathy was hanged, Privy Counsel was engaged to save Sambasivam from death. In Sambasivam's case, not only the voices of opposition were heard in India but in Malaya the local newspaper and reporters were very critical on how the British used force to get rid of trade unionists.

All though the voices of opposition raised in India against outcome of Ganapathy's appeal, the Indian Congress Leaders such as Nehru and Patel were not very concern as they have their own problem to dealt with, especially the communist and socialist movement in India. The communist and socialist parties were against of India's view to join Commonwealth. India in other hand needed commonwealth support to help in their Kashmir issues. The Commonwealth seen as huge association which India needed to get rid of their communist "trouble-makers." 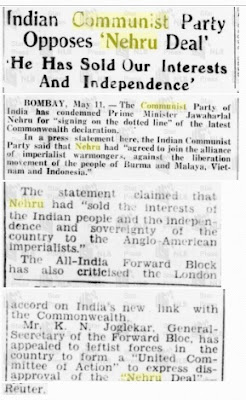 The Indian Daily Mail reported on the 12th May 1949, on view raised by Communist Party of India (CPI) condemning the Prime Minister Nehru for "signing on the dotted line" of the latest Commonwealth declaration.
The statement claimed that Nehru had sold the interest of the Indian people and the independence and the sovereignty of the country to Anglo-American imperialists"
Another  opposition voice in India the All India Forward Block, which once was lead by Subhas Chandra Bose, had also criticized the London accord on India's new link with Commonwealth.
Its General Secretary K.N Joglekar appealed to leftist forces to form "United Committee of Action" to express disapproval of the "Nehru Deal."
Why the leftist was concern of the deal that Nehru forged with Commonwealth? We will discuss this in future postings.


Note on Joglekar
K.N. Joglekar was born at Uttarpradesh. He was involved in the Meerut Conspiracy Case - controversial court case, in which several trade unionists, including three Englishmen were arrested for organizing Indian Rail strike. The Sessions Court in Meerut awarded stringent sentences to the accused in January 1933. Out of the accused, 27 persons were convicted with various duration of ‘transportation’. Joglekar and his comrades were each awarded transportation for a period of 12 years.
Posted by Saminathan Munisamy at May 01, 2020