The Hindu editorial strongly urged the Government of India to intercede with Whitehall in order to obtain reprieve for Ganapathy. It reported Ganapathy is under sentence of death by Malayan court for illegal possession of a revolves.
The plight of the Indian labourer's in Malaya's turmoil is of great concern to us, declared the paper adding the labourers are caught in the terror campaign of the communist. agitators and strong-hand, t methods of the Foreign Administration. The labourers "should not feel that have been orphaned by the storm. To their credit, they have managed to keep out from the conflict in the spite if pressure form those challenging the authority of the Rulers," the paper reported.
"But there is some danger of the Rulers succumbing to the pressure from the planting interest to exploit disturbance for suppression of legitimate labour movements"
The paper continued :
"The risk of one or more Indian falling victims unwillingly to the rough justice now administered in Malaya by the regime which seeks to crush the revolt in very real. We are concerned with question of the rights of the Malayan Government to take drastic measure to restore law and order. But we are very concerned to see that in the process no innocent Indian's life is placed in jeopardy. Specifically we would like the case of Ganapathy to be examined by the Government of India before the death sentence is carried out by the Malayan Government.
"The decision to charge a man under ad hoc capital without even an allegation that he was actually connected with murder gang or terrorist organisation takes on an ominous significance in the light of the fact that Ganapathy was the ex-President of the Pan Malayan Federation of Trade Unions which was since been banned."
The editorial concluded :
"The Representative of the Government of India should not spare any effort to prevent a grave miscarriage of justice. But the Government of the India to whom the people of Ganapathy's native village in South India have already submitted an appeal on his behalf. should make urgent representations to Whitehall to reprieve Ganapathy." 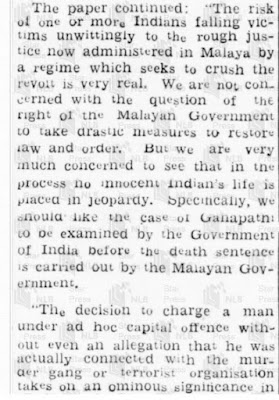 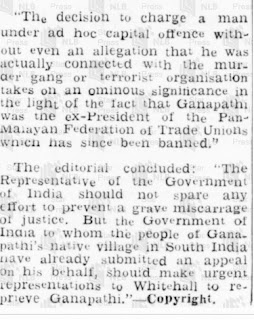 Posted by Saminathan Munisamy at April 26, 2020