Telegram from Secretary of States of Colonies Affirming Gurney's Decision: Not to Refer Ganapathy's Case to Sultan 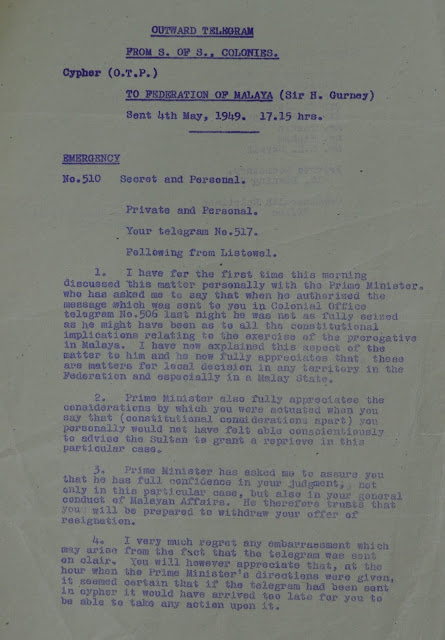 This telegram was sent to High Commissioner of Malaya Sir Henry Gurney on the same day Ganapathy was executed – 4th May 1949. It was sent at 1715hrs (Britain Time) by Lord Listowel

The telegram reads as

1. Lord Listowel has spoken to Prime Minister Clement Atlee on S. A Ganapathy execution which took place at the dawn of 4th May 1949, as the Prime Minister may not fully aware of the “constitutional implications relating to the exercise of prerogative in Malaya”. Atlee seems to be “fully appreciates" that the matter of Ganapathy execution was made in the context of “local decision in any territory in the Federation and in Malay States."

2. Atlee also fully appreciates the consideration by which Gurney was actuated when Gurney said that (constitutional consideration apart) and Gurney personally would not able to advise the Sultan to grant a reprieve.

3. Atlee has assured Gurney that he has full confidence in Gurney’s judgment in the case of Ganapathy and trust that Gurney will prepare to withdraw his ultimatum.

4. Finally Listowel deeply regretted for sending the telegram through "in clear" (not coded) as to consider that telegram to reach Gurney before the execution.

Having to look at the telegram, Listowel seemed to have convinced Atlee and justify the execution of Ganapathy. The constitutional rights of Sultan of Selangor to grant reprieve in Ganapathy’s case has been the main key to justify British decision to hang Ganapathy.

The questions that are going on in my mind now: Why the telegram No.506 was sent at 2015hrs (GMT) knowing all the fact that it was 0415hrs in Malaya and Ganapathy was scheduled to be hang at that dawn?

Now, this lead to something else, did Gurney actually received the telegram before the execution of Ganapathy or after the execution?

And finally, why Gurney was so afraid that the news/contents of the telegram to be "leaked out" through an Indian clerk in his administration? If the Brits were assured that the execution of Ganapathy was done based on the law and order; why the contents of the letter become too important that it would be disastrous if contents to be leaked out to public?
Posted by Saminathan Munisamy at January 02, 2013