A $10,000,000 shipping company with two trade union leaders among the directors has been floaated in Singapore. Its name is the India Lanka Steam Navigation Company Ltd.

The company purposes to: 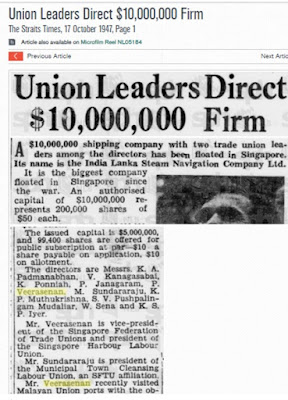 "Buy, lease and acquire approved navigation steamers, lifters launches and steamships from the Naval Surplus Board and authorities, enter into agreement with any Government of "fuedatory state."

"Establish and acquire dockyard and slipways facilities where soever permitted. Navigate steamers of high and small tonnages. steamships. launches, lighters and boats throughout the length and breath of the navigate high seas subject to local and regional rules and regulations of steam navigation."

The company has already earmarked a tug called the Varuna which can be used to carry cargo. The promoters and managing agents of the company are Messrs. P.K.P and Co., 39 the Arcade, Singapore
The shipping agents are Messrs. T.W Harrison and Co.

Posted by Saminathan Munisamy at November 17, 2012