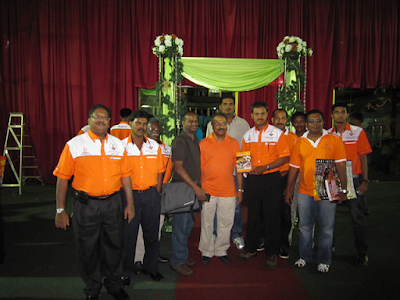 My reference sources at National Library of Singapore have become saturated now. Almost all articles contained the phase “S.A Ganapathy", I have laid my eyes upon. I was thinking that I have come to an end, not able to move forward, may be my next stop should be the Public Records Office, Kew, in London, which housed the most of declassified documents of colonial era.

But my intense focus in the matter drove me unintentionally to a book launch last Sunday, 19th Dec 2010. The author is no stranger to us, the Adviser of Human Right Party Malaysia, Lawyer P. Uthayakumar. His book "Nov 25, 2007-Hindaf Rally" was launched with another book contains declassified documents from Public Records Office titled " Public Forum on 50 Years of Violation of the Federation Constitution by The Malaysian Government", which in my opinion one of the fine great work ever produced. It taken me by surprised to read his dedication note in the book which goes like this:

“The research Publication is dedicated to Mr. Ganapathy, President of the Pan Malayan Federation Trade Unions who was executed by the British on 4/5/1949, his successor Mr. P. Veerasenan who was (mysteriously) shot dead by a patrol on 3/5/1949. Both championed Indian labour rights.”
Without wasting time, I flipped through the pages that contained letters of condemnation sent to British Embassy against S.A Ganapathy’s execution. One of the letters that caught my attention, which was written with severe condemnation and criticism without fear and favour against British government, was written by B. Gebert Assistant General Secretary of World Federation Trade Unions based in Paris, France. The letter as follows ( I shall be providing the scan copy later, extracted from "Public Forum on 50 Years of Violation of the Federation Constitution by The Malaysian Government")

The WORLD FEDERATION OF TRADE UNIONS has the honour to request you to be good enough to transmit to your Government its energetic and indignant protest against the execution of Messrs. GANAPATHY and VEERA SENAN, leaders of the Pan-Malayan Federation of Trade unions (PMFTU)

Mr.GANAPATHY, a young trade union leader of 24 years of age whose only crime was to defend the interests of the workers of Malaya, was hung on may 4th 1949, in the prison of Kuala Lumpur on a ridiculous, improbable and inadmissible pretext.

In reality, the murder of Mr. GANAPATHY, which has aroused horror and indignation among all the workers of the world, gives proof of the resolute will of British authorities to impede, by every means, the functioning of free and representative trade union organisations, as well as the free exercise of trade unions rights in Malaya.

This attitude is not of recent origin. As early as 1945, a great number of trade union leaders were deported and imprisoned on the pretext of “intimidation” and “political agitation”.

In August 1946, the British authorities established a complicated procedure for registration of trade unions, designated to eliminate the trade unions truly representative of the workers. However, a great many trade unions were registered nevertheless and they then formed the Pan Malayan of Trade Unions, with a membership of 300,000 members and with which the WFTU established official relations.

In these conditions and being able no longer to tolerate the activity of the PMFTU which was directed towards uniting and defending all the workers, without discrimination and to nationality, race, religion, political or philosophic opinions, the British authorities obtained the adoption, on the 1st June 1948, of trade union rights, banned the federation of trade unions grouping workers of different trades.

Consequently, on 13th June, 1948, the disbanding of PMFTU was officially decreed.

This decision is to be explained by the fact that, since the end of hostilities in Asia, the workers of Malaya, increasingly conscious of their rights and their community of interests, have unleashed a vast movement in support of their demands, attempting in the way to change the miserable conditions of the existence in which they are forced to live. In fact, the well known poverty of the workers of Malaya have deteriorated even further since the end of hostilities as a result of the closing down of rubber factories, the employers’ policy of wage freezing and maintaining profile at a high level, and by the growth of the black market.

Instead of alleviating the situation of Malayan workers, the British authorities mobilised the police and army against the workers and arrested and assassinated a great number of tade union leaders. We would indicate as an example, the murder on 5th July 1948 of Mr. TAN KAN, President of the Johore Rubber Workers’ Trade Union.

These movements, which were purely in support of the workers demands, were described by British Commissioner-General for South East Asia as “a bestial campaign of agitation” and followings a now classic formula, the Commissioner-General attributed them “to the restless and impatient directors of international communism”.

The W.T.F.U openly declares that the situation existing todat is due to the inhuman exploitation of the Malayan workers by foreign monopolies and trusts, as well as to the desire of the British authorities to annihilate the spirit of resistance and the means of action of the Malayan workers. Moreover, our organisation can in no way stand aloof from the events in Malaya since the mission of the W.F.T.U is precisely that of defending and assisting the workers of the world, whatever their nationality, race, religion, political or philosophic opinions.

We therefore request your Government to take immediate measures to ensure the free exercise of trade union rights in Malaya, in accordance with the provisions of resolutions 84(V) of the Economy and Social Council of the United Nations and 128(II) of the General Assembly, and the article 23 of the Universal Declaration of Human Rights, provisions which were approved by the British representatives within the United Nations bodies in question.

Already in 1946, the WFTU was considering the dispatch of a mission of enquiry to Malaya and its plans were received at the time with obvious hostility by the local authorities.

In the light of recent events, it appeared yet more urgent for the WFTU to make known to the workers of all countries the real situation which exists in Malaya. Consequently, we have the honour to request your government for permission for a trade union Commission of Enquiry appointed by the W.F.T.U to enter Malaya.

In asking you to be good enough to transit this letter to your Government and in the hope of favourable reply in the shortest possible time, we are,

For the Secretariat of the