Brother Claimed that S.A Ganapathy was Not Armed- Accusation of Arms Possession was Fabrication


Another controversy surrounding the death of S.A Ganapathy has surfaced recently. S.A Ganapathy was arrested at Waterfall Estate near Rawang on Tuesday 1st March 1949. He was allegedly accused of possessing arms - a hand pistol with 6 life ammunition. Two weeks later on Tuesday 15th March, Kuala Lumpur High Court sentenced him to be hang to death. On Wednesday early morning 4th May 1949 (less than 2 months after his arrest) he was hanged in Pudu Jail, Kuala Lumpur.


Recently, I came across an article on Ganapathy, published in Sembaruthi - January 2010 edition, that actually creates mysteries surrounding his arrest. The author of the article, A. V Kathaiah needs no introduction- a prominent unionist - currently also editor-in-chief for MalaysiaIndru – the Tamil Version of Malaysiakini


It was about an interview with S.A Ganapathy' younger brother, S.A Sargunam* which took place in September 2009 in a village at Parakkalak Kootam in Tanjavur district in Tamil Nadu, India. The article claimed that Sargunan was 94 years old when the interview was done.

In the interview, Sargunam claimed that his brother was innocent and the whole drama of arms possession was fabricated by the police and British administration. According to Sargunam, he has visited his brother in Pudu Jail before the execution. At that time Sargunam was also detained in a prison in Pulau Belakang Mati, Singapore (old name for Pulau Sentosa) for suspicion of involvement in communist activities in Singapore. He obtained a special permission to visit his brother, Ganapathy in Kuala Lumpur after numerous attempts and applications to Governor of Singapore and appeal through Representative of Indian Government to Malaya, John Thivy.


Sargunam was escorted by an investigation office called Ramalingam from Singapore. Upon arriving at the police commissioner’s office in Kuala Lumpur, he was brought to meet his brother by the police commissioner himself (who was a white) at 7.30am on Monday, (most probably on 25th April 1949). He also told Sembaruthi that when Ganapathy saw their entry to his cell; he stood up and saluted the commissioner and the commissioner returned his salute. Ganapathy spoke to the commissioner (in English) for a while. Then the commissioner told Sargunam to take his time and left the cell. Sargunam also told that there were 17 inmates who were kept in different cells (my guess is that all these inmates could have been convicted at the same time as Ganapathy). The cell was equipped with toilet and bathroom. Throughout the meeting Ganapathy looked calm and never at any point felt regretted of neither his acts nor his destiny. 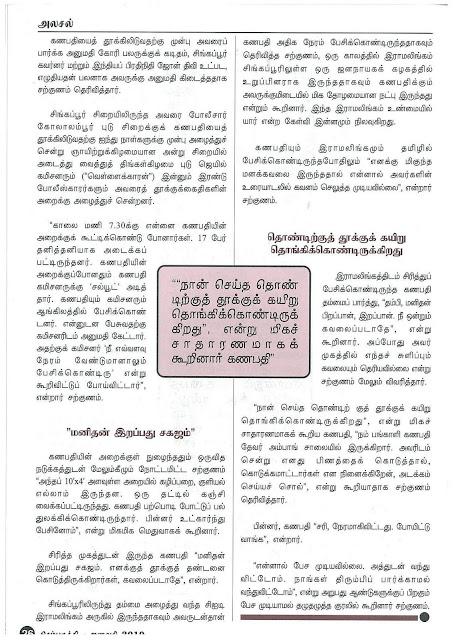 According to the article, there were mass protest and opposition over the decision of Kuala Lumpur to hang Ganapathy. Indian Prime Minister, Nehru through Indian High Commissioner for Britain, V.K.K Menon has convinced British Prime Minister, Clement Atlee stop the execution and convert the sentence to life imprisonment. It also says that Atlee had send a telegram to then the Malayan High Commisoner, Sir Henry Gurney to stop the execution. (The telegram has been revealed in this blog)


According to Sargunan who was totally immersed in sadness over his brother’s destiny, told Sembaruthi that Ganapathy was beaten up in prison and received medical treatment before he was hanged.


The Horror of Pudu Jail - where Ganapathy spent his last days

Upon returning to Singapore, Sargunam learned the death of his brother on 5th May 1949. Later Sargunam was deported to India together with hundreds of Indian who involved in struggle against British. Not forgetting hundreds more who were shot death like P. Veerasenan for opposing British's rule in Malaya. Those martyrs were Malays, Chinese and Indians. All they wanted was equality regardless of race, religious and political ideology. What bond them together in solidarity was the struggle for a free and independent Malaya. They fought regardless of race and religion with one aim that is to cast off British from Malaya. But the British who were not able to bare the humiliation thus introduced Sate of Emergency in Malaya to eliminate these resistances. Later British introduced and blessed British pro-parties like UMNO (under leadership of Dato Onn Jaafar) and later Parti Perikatan (under leadership of Tunku) as Malayan’s representative for independence and continue to hold on to British interest in Malaya for several decades.


(Note: *heard from a friend of mine that S.A Sargunam passed away in somewhere in February or March this year..May the his soul will find eternal peace in the Kingdom of God)
Posted by Saminathan Munisamy at September 11, 2010