It is Labour Day today. I am starting to write again after a long break. I have been keeping this article for sometime and thought would be great to share it on this Labour Day.

The article was taken from CIA's archive, written on 17th November 1949.
Ganapathy's name was mentioned in the article. It stated that in December 1945, two Indians (one of the was Ganapathy) who had been Malayan Communist Party (MCP) members were "instigated by Chinese leaders of the party to recruit Indians".
It is also confirming to the existence of a separate Indian section within the MCP. A temporary committee called Indian Executive Committee (IEC) was established in April 1946. It was a subordinate to the Central Executive Committee (CEC) of MCP. It was reported that IEC received instruction from MCP through a Chinese Liaison Officer.

IEC built up their support groups in North, Central and South Malaya. State and city branches were organised and in August 1947, IEC acquired a full range of administrative sections like the MCP.

The report believed that MCP decided to grant greater "degree of responsibilities"  to the Indians as they saw the "Indians enthusiasm started to slackened" in 1947.  IEC was reorganized and expanded with new flexible rules were adopted. IEC's contact with parallel Chinese branches was close but their access to top Chinese was limited.

According to the report, the IEC's main function was to penetrate Indian labour force. Therefore, the reported stated that it was surprise to notice one third of the members of State committee were trade union organizers.

In early 1948, after the Calcutta Congress of Communist Party of Indian (CPI), the CEC was considering allotting places to Indians and Malays within the higher councils and ranks in the party. But the plan failed after the declaration of emergency in June 1948.

The report also mentioned that the Chinese were aware of emergency in April 1948, but the Indians were ignorant of the imminence of open rebellion and had made no preparation to go underground. As a result, the Indians have proved to be militarily useless and practically all the Indians leaders had been put out of action either by death or deportation.

It also stated that contact established by Indians in Malaya with MCP had been "haphazard and unproductive" and the Malayan Indians received little advise or help from CPI even when direct request was made to CPI.

The reported stated that the necessity to cultivate the Malays into the folds of MCP recognized through more propaganda printed in Jawi.

There had been also conflicting claims between the MCP and Chinese Communist Part (CCP) on the loyalties of oversea Chinese. The MCP proposed that those who returned to China to be expelled from the party, though it recognized the validity of demand from CCP that technicians and capitalists return to their mainland. CCP radio propaganda is said to be having considerable effect on Malayan Chinese Youth.

The MCP began its publication of "Student News" in August 1949 in Singapore despite the alertness  and efforts of Security Force. Propaganda pamphlets had been found in increasing numbers in Singapore. 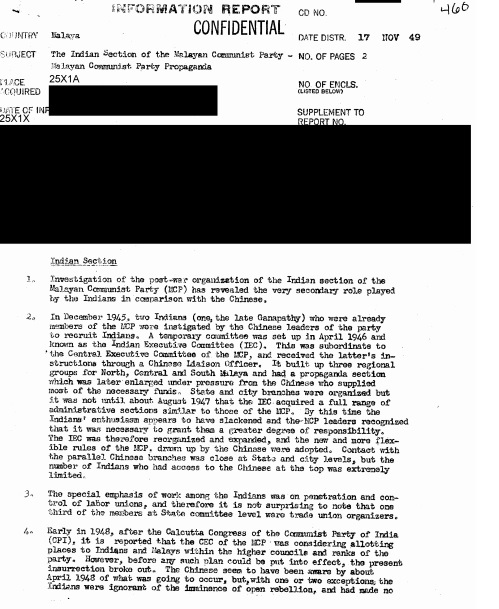 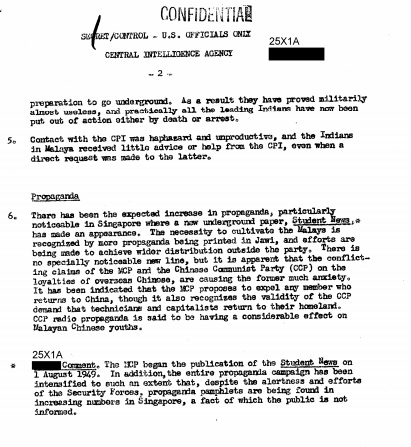