World Federation of Democratic Youth Delegates in 1947 May Day Celebration

This will be my first posting for the year 2018. I have made resolution for the year that I will post at least one posting weekly.

Many would knew during the post war period, the leftist organisations in the country mainly Malayan Democratic Union and Pan Malayan Federation of Trade Unions established connections with China and India. In fact, history stated the political changes and development in China have induced the Chinese leftists to travel to Singapore and Malaya to form the Nanyang General Labour Union (NGLU) in May 1926. Later NGLU took the form of Pan Malayan General Labour Union (PMGLU) and later evolved to Pan Malayan Federation of Trade Unions (PMFTU) in 1947.

But not many would knew that a female representative from Russian visited Malaya during May Day celebration in 1947. The Straits Times dated April 28, 1947 reported three member delegation from the World Federation of Democratic Youth - Olga Tchetchetkina, a Russian journalist, Rajko Tomovic, a representative of the Youth Organisation of  Yugoslavia and M Jean Lautisser a leader of the Union of Republican Youths of France arrived in Singapore to take part in the May Day rally in 1947.

It also reported the delegation came to study and report on living conditions in Malaya with particular references to the youths in Malaya.

In a function held to welcome the delegation at 331, North Bridge Road organised by Malayan Democratic Union and 40 other organisations including SFTU and New Democratic Youth League, the Vietnam Youths and Malay Women Emancipation organisation, Ms Olga called for unity among the youth to ensure success against fascism and aggression.

The Malayan Tribune dated May 2nd, 1947 reported that in the May Day rally, Olga greeted the local workers and she thought of the parade at the Red Square. She said there were many people to whom promises, which were made during war had not yet been realized, but first of all, the world peace must be obtained.

"The Soviet Union will not forget that the Chinese, Indians and Malays in this part of the world had also contributed their share when the USSR were fighting five years ago to over power Fascism" said Olga

In the rally, a silver shield was presented to the PMFTU by Tuan Dj. Shahruzah representing the All Indonesia Central Oraganisation of Trade Unions.

There were banners carrying slogan "Eradicate Contract Workers," "Sunday Rest With Pay," "Democracy Instead of Constitutional Proposal for Malaya," "Equality for All Races of Labour" carried by workers forming one of the longest processions seen in Singapore and wended its way over a three-miles route along main streets of the city. 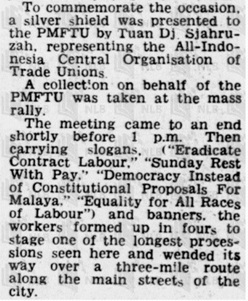 Posted by Saminathan Munisamy at January 05, 2018