It is my strongest conviction that if Sambasivam was captured uninjured, he would have been the first Indian casualties of Emergency Regulation 1948, which could have saved S.A Ganapathy from the gallows. But, unfortunate for Ganapathy for he was sentenced first in the court of law for unlawful procession of fire arms. 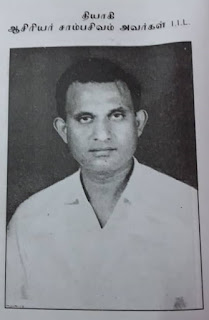 Interesting to read that Sambasivam's case had taken many twists and turns before he was freed by the court.

The Straits Times dated 5th March 1949, reported that retrial for Sambasivam's case as the Judge disagreed with the finding of the assessors.

Sambasivam was discharged from hospital on 28th February 1949 when he was brought to trial at the Johor Bahru High Court on the 2nd and 3rd March 1949 for unlawfully carrying arms. The assessors found him not guilty but the trial judge disagreed and orders a retrial.

In the retrial which took place on 22nd March 1949, he was convicted by both assessors (a Malay and an Indian) and found guilty. He was sentenced to death. 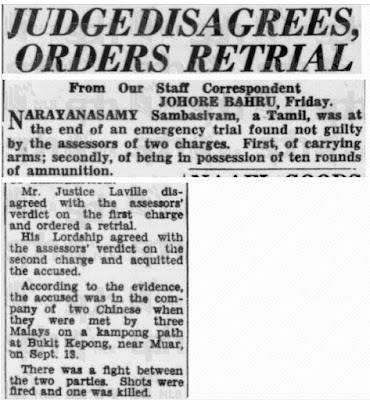 Johore Bahru- Narayanasamy Sambasivam. a Tamil, was at the end of an emergency trial found not guilty by the assessors of two charges. First, of carrying arms; secondly, of being in possession of ten rounds of ammunition.
Mr. Justice Laville disagree with the assessors' verdict on the first charges and order a retrial.
His Lordship agree with the assessors' verdict on the second and acquitted the accused.
Acoording to the evidence, the accused was in the company of two Chinese when they were met by three Malays on a kampong path at Bukit Kepong, near Muar on Sept 13 (1948)
There was a fight between the two parties. shots were fired and one was killed.
Posted by Saminathan Munisamy at August 05, 2016