One of the biggest strikes that was staged by All Malaya Rubber Workers' Council (AMRWC) under leadership of CSV Krishna Moorthy was the national strike calling all rubber tappers to stage a one-day stop work as to show their defiant towards Planters Association.

The important fact to notice here is that although AMWRC was a Indian dominated labour union, it also took up care of issue pertaining to Chinese labourer. As a result of this strike organised on 25th August 1947, the British establishment was shaken not only for a day of Malaya-wide rubber plantation strike, but also the British started to realise that the Indians and Chinese are collaborating with each other.

The Straits Times dated 21st August 1947 reported that All Malaya Rubber Estate Workers' Council would call for a Malaya-wide if UPAM refused to grant them 100 percent wage increase and removal of the 20 percent wage reduction for the Chinese labourers which was implement in July 1947. The meeting was held between the 60 Indian representatives of Negeri Sembilan Rubber Workers Union and President of AMRWC, CSVK Moorthi.

Other resolutions taken were:
1. AMRWC empower to negotiate wage issue with UPAM
2. A memorandum to be forwarded to UPAM urging the association to discuss wage issue with AMRWC. Failing to reach any agreement will result to one-day protest.
3. A memorandum also to be sent to the Governor of Malayan Union, Sir Edward Gent, requesting him to urge UPAM to discuss with AMRWC on wage matter. Failing to do so, the workers also issued an ultimatum that "the Government would be responsible for whatever labour dispute might arise in future" 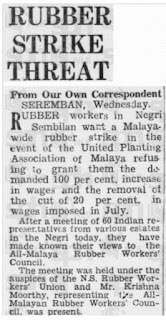 Meanwhile, the Singapore Free Press dated 22 August 1947 stated that, a protest to be staged on the 25th August 1947 to be a token protest against the "adamant of  the UPAM" on issue related to wages.

The council also requested to seek timely and effective help from Pan Malayan Federation of Trade Unions for the assistance and advise.  The PMFTU was under the leadership of S.A Ganapathy. 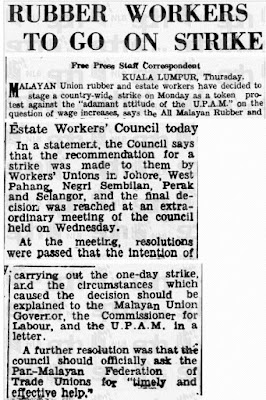