Being a communist, Ganapathy was captured and tortured by Japanese Kempeitai (Police). This was confirmed by the former Director of Special Branch Singapore, Ahmad Khan, in a oral history with Singapore National Archive.

In Abdullah CD's memoir "Penaja Dan Pemimpin Rejimen Ke-10 (Bahagian Kedua)", Abdullah stated that Ganapathy told him that he almost died in hands of Japanese Kempeitai, but fortunately he survived.

The Strait Times dated 9th May 1946, reported a trail which involved Ganapathy. The accused, Inspector Vellu Pillai, was a long-service Police officer who served the British. During occupation Pillai worked for the Japanese. Vellu Pillai was arrested for collaborating and committing crime for  the Japanese after the war. 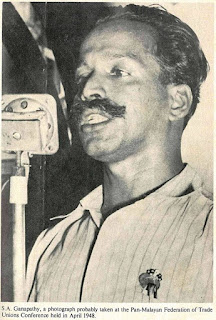 
"I was taken before a Japanese officer without a word being spoken. I was made to kneel and take off my shirt, after which the beatings started immediately, first by two Malays, followed by an Indian and then by a Japanese officer. Riot sticks and leather straps were used. The beating went for two days at intervals, and I suffered from the effects for six months afterwards.'

Ganapathy's statement against Inspector K. Vellu Pillai was recorded by H.A Forrer in the Seventh Police Court on the 8th May 1946.

According to Ganapathy, he was tortured between March and April 1942. Ganapathy was one of three victims involved in the case. Ganapathy also informed that he knew the accused before war and Ganapathy was detained under the instruction of the accused.

Ganapathy was taken before a Japanese officer in charge of the Special Branch and hammered before any interrogation.

Another victim, Inspector Karam Singh, was detained by the accused and questioned for posseion of a radio and cash $900 which found in his house. Karam Singh was taken before Japanese officer and he suffered tortures on three occasion at the hands of Vellu.

Vellu was in charge of a section under Japanese Special Branch (Kempeitai) that dealt with Indian Muslims.

The Kempeitai came under the jurisdiction of the Ministry of War. Its head was Lieutenant Colonel Masayuki Oishi with his headquarters at the YMCA in Stamford Road, which also served as the East District Branch.

When Ganapathy was captured in March 1949, it was reported that he suffered from poor health due to piles. I am wondering whether this has to do with physical tortures Ganapathy received during the Japanese occupation. 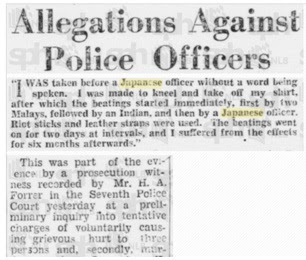 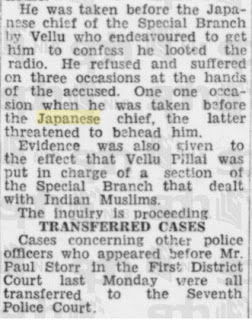 Posted by Saminathan Munisamy at November 29, 2015