As we are looking at Indians earliest retaliation against his colonial master, again Federated Malay States (FMS) Railway, which employed many Tamils, proven to be vital in providing platform for radicalization of Indian labourers in Malaya.

It has been reported on 30th April 1934, another railway strike was orchestrated by the Indians. This time the demands that they put forwards surprised me in many ways as they were not demanding for mere survival but they are demanding their rights as workers. I see many elements of Marxism which propagates proletariat's rights in general. The FMS railway workers were very well aware of their rights as stated in the news that:

..that the strikers noted that the committee was prepared to submit a memorandum to the general manager for submission to the Government, but as there had been no indication that the memorandum would be sympathetic, they desired some assurance to the effect that the grievance would be reasonably redressed and that as a mark of good faith they asked the committee to give assurance that wages for the period of the strike would not be withheld. Only on these conditions they would resume work.”

The strike spread to Singapore and affected the whole country except Kedah and Kelantan. A memorandum which consists of 14 resolutions taken by the strikers, had been submitted to the general manager of FMS Railway and this to be forwarded to the British Government.

These resolutions were published in Tamil Nesan. The fourteen demands are:

1. 15% cut in wage to be discontinued as the labourers are put to very hardship

2. Cuts up the present day to be refunded

3. The bonus of two hours granted for them on Saturdays, which has been stopped, be returned

4. Increments should be granted yearly

5. Workmen receiving injuries at workshops and sent to hospital should received full wages

6. Every month labourers shall have three days leave without asking permissions

7. Children of the workmen shall be given work

8. Every workmen who receives a salary of $2 per day or more be allowed a second-class free pass on the railways

9. A ruling that was given that workmen who go to India for six months’ leave would not be given further work on return, should be cancelled.

10. In computing a gratuity for apprentices, the date they were taken into service should be considered.

11. As previously, apprentices should be granted increments every six months

12. When apprentices finish their course they should not be told there is no work for them. Work must be found.

13. The ruling made in 1934 that new workmen should pay house rent should be cancelled

14. The practice of discharging workmen who have put in seven or eight years ‘ service and enlisting temporary men should cease

I am particularly astonished with the resolution No 3, which was introduced in 1925 but later was withdrawn in November 1932. It allowed that workers to be paid for eight hours instead of work done for six hours! I am not sure why these concession was made earlier in 1925, but according to the news the concession was ceased with considering the economical situation during the Great Depression.

The committee also warned that if Government decided to terminate the workers, it will be regarded as unlawful termination. 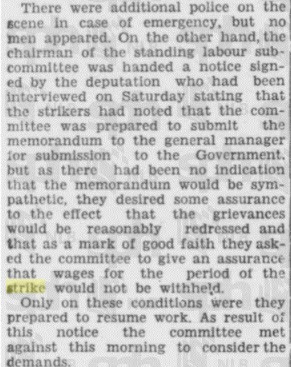