Many of us knew that Klang Strikes 1941, was one of the earliest strikes organised by plantation workers in Malaya.

“One of the largest, best organised and most militant strike by Indian workers which Malaya had ever seen”

Rajeshwari Ambalavanar, in her book "The Indian Minority and Political Change in Malaya 1945-1957" remarked the event as an event that gave birth to political consciousness among Indian labourers

“The strike, though quickly crushed by vigorous police action, lasted long enough to establish clear political consciousness among labourers. Vernacular educated radicals, working with Kanganies and Tamil teachers in estate schools, successfully encouraged the tappers the question the basis cause of their depressed economic and social position”

Though much were discussed on the overall and outcome of the strikes among labourers, not many reference are made to give us exactly on details of the strikes such as where it occurred, who were responsible, those who died etc.

The Straits Times reported on the 18th June 1941, that District Officer of Kuala Selangor A.D York who sat as a coroner in the Kuala Selangor Court postponed two inquires into the death of two Tamil labourers in Klang Strike.

They were Rengasamy from Bukit Cheraka Estate, Jeram and Yellamalle from Highlands Estate.

From the article, we understood from the accounts given by a witness named Menon, Rengasamy succumbed to head injuries that he received during a clash with police at Bukit Panjang Estate, Jeram. Menon who treated Rengasamy told the coroner that Rengasamy appeared drowsy and vomited blood the next day due to concussion of brain.

According to A.J Gomm, the manager of Bukit Panjang Estate, the labourers went on strike on the 21st April and remained out until 16th May. There were some rubber packs kept in the packing shed. His attempt to remove them failed as the labourers did not permitted the removal of the rubber packs. On the 8th May 1941, Gromm consulted the Chief Police of Selangor, H. B Langworthy, to assist him. The police came with a party of 160 strong . They were confronted by 75 labourers who armed themselves with sticks.

A group of teenage boys around 16 years old claimed to pelt the police with stone. All hell broke loose! Eight labourers injured during the clash including Rengasamy and Yellamalle. Later, the labourers regrouped at around 5 pm and this time it was 600 to 700 and demanded that the injured labourers to be sent to Klang Hospital.

Refused to heed orders of the CPO to disperse, the CPO order another “lathi” charge towards the crowd. 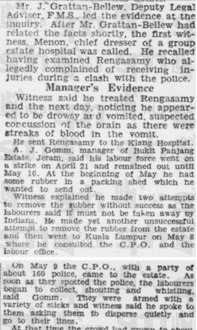 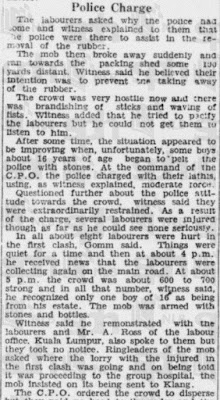 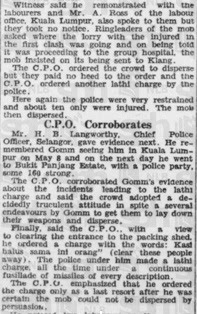