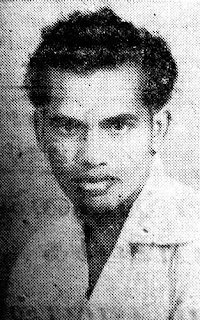 Workers' Unions Federation (SWUF) in Singapore, and was a former vice-president of the Pan-Malayan Federation of Trade Unions (PMFTU), took the lead from his predecessor, S. A Ganapathy. He was martyred in Negeri Sembilan on 3 May 1949 at the age of 22.

In Part 2. Abdullah CD's memoirs titled Penaja dan Pemimpin Rejimen Ke-10 (Petaling Jaya, SIRD, 2007), recalls that martyr P. Veerasenan, whom he first befriended in Singapore after the end of the Pacific War, was an "experienced" labour activist who was "highly influential" among the workers at that time. Martyr P. Veerasenan's death reported in Singapore Strait Times dated May 4th, 1949. I have reproduced the news report below.


One of the bandits who ambushed five civilian vehicles and killed two men on the main trunk road 13 miles north of Kuala Lumpur on Monday night has been seriously wounded, and the gang's camp has been destroyed.
After the ambush has been reported by the survivors on Monday night, a police flying squad from Rawang was sent to the scene.


They fired several very lights and then poured bullets into the undergrowth.
Early yesterday, the area was searched and in one spot police found blood stains.
With Dyak trackers and a party of the Scots Guards, a Police jungle squad followed trails into the hills east of the main road and found the bandit camp.
As they approached, they saw sentry. They fired on him as he ran, but he escaped and warned the rest of the gang.
The camp consisted of 10 huts.

Two bandits - a Chinese and a Tamil - were killed and one wounded yesterday when a large bandit camp near Pertang in the Jelebu district of Negeri Sembilan was attacked by a party from 1/7 Gurkha Rifles.

Rubber stamps and documents found in the camp revealed that it was the First Brigade HQ of the "National Liberation Army of Malaya" a military spokesman told the Strait Times Today.

When the attack began the bandits - who included 15 woman - ran out of the camp leaving behind all their equipment. This included about 70 packs filled with clothes and other stores.
Two service rifles, two shotguns and about 700 rounds of ammunition were recovered.
The camp consisted of seven huts with accommodation for at least 70 people.
Soon after the bandits ran out the camp they open fire on the Gurkhas from the 200 yards with Bren gun, a Sten and a few rifles.
The fire was returned and a blood trail was found after-wards.

Having read this article, well as a mouthpiece of the British, one can identify the bias reporting elements existed. It was reported that there was an ambush in Rawang on the Monday night (May 2nd, 1949). The Scots Guard tracked the searched the area on the Tuesday, May 3rd, 1949 and tracked the blood trail all the way from Rawang in Selangor to Pertang in Negeri Sembilan. The guards (with Gurkhas) found a group of "bandit" in Pertang, attacked the group and killed 2 "bandits", who one of them was identified as P. Veerasenan. identification of the bandit was reported two days later on the May 6th, 1949.

Discrepancies in Distance and Date of Report

According to the Google map service, distance between Rawang and Pertang is recorded as 121 km. According to the news, the Scots Guards tracked the blood trails with help of a Dayak - an indigenous native community used as head-hunters in fighting communist insurgency in Malaya. In my view, if at all the Scots Guard party to cover the distance of 121km on foot, it would have taken them a few days.

Now let me put this to an argument. Let's say, the guards started their mission of "tracking" down the bandits as early as 4 am on Tuesday, May 3rd 1949 from Rawang. The guards would found the bandits hidings in Pertang in the morning of 4th May, 1949. If this was the case, then why the attack was reported as taken place on the very same day - 3rd May, 1949?

I am assuming that the whole connection between ambush in Rawang and killing of Veerasenan was just a negative propaganda by British to tarnish the communist's struggle. The British may have fabricated the evidences by blinding the public that Veerasenan was involved in the Rawang ambush. Let's not also forget the Scots Guards were well know for their notorious behavior in military aggression. One of their aggression clearly can be seen when the Scots Guards from the G company of 7th Platoon massacred 24 rubber tappers in Batang Kali on the 12th December 1948.

Freedom Fighters labeled as "Bandits and Gang" and Tamil

Take note of the freedom fighters were labeled "bandits and gangs" and also notice the word "Tamil" was used instead of "Indian". This is an important aspect to ponder on the political relationship between Britain and India. It is my opinion that if the word "Indian" was used instead of "Tamil", this would triggered unwanted wrath from the Indian Government. The newspaper had chosen to use the word "Tamil" as to implicate that only small fractions of the Indians in Malaya were involved in CPM.

Indians in Malaya were consisted of largely of the Tamil, Telegu, Malayalee, Sikh, Ceylon Tamils, Sinhalese and North Indians. The British had brought the Tamils and Telegus from India (mostly from Madras Presidency) to work in plantations in Malaya as indentured labours -   "collies". To administrate these collies, British had brought the educated Malayalees and Ceylon Tamils.

When the British failed to register PMFTU on the ground of communist linked organisation in June 1948, a Malayalee named Palayil Pathazapurayil Narayanan (aka P.P Narayanan) was chosen to head the Indian rubber plantation workers under National Union of Plantation Workers (NUPW) - an union movement fully backed by British.

Another aspect that need to be mentioned will be the women involvement in National Liberation Army of Malaya - the armed struggle movement of CPM. The arrest of 15 women during the ambush was an inevitable evidence of the influence of National Liberation Army of Malaya among Malayans regardless of age, race and sex. The liberation waves which was created after the Japanese occupation and coupled with INA Rani of Jhansi Regiments, had a great impact among Malayan women beyond the barrier of race, language, culture and religion. Their attention was focused to drive away the British from this land.
Posted by Saminathan Munisamy at September 12, 2009