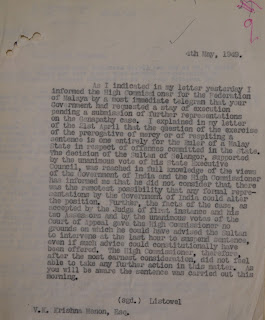 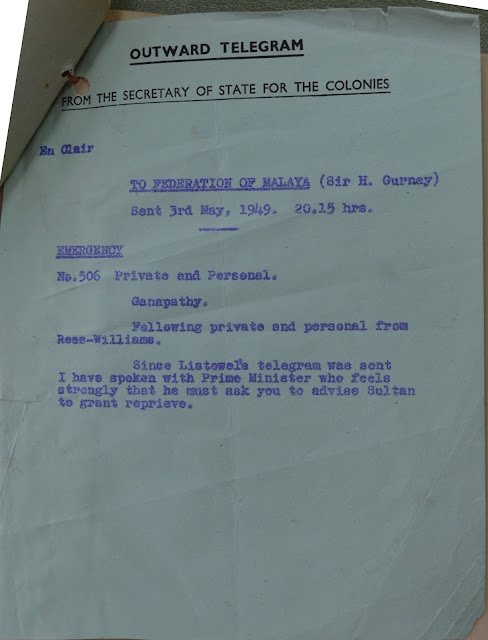 I would like to express my gratitude and thanks to Dr, Geoff Wade (Senior Fellow Researcher at Institute of Southeast Asia Studies (ISEAS)) in Singapore for his efforts getting this important telegram (which I never taught will get) from Public Record Office in Kew, London.
And also to Ms.Vani in Singapore who introduce me to this great gentlemen. They would definitely remembered as part of this discovery and biography of Ganapathy (in progress now).

The content of the telegram as follows:
OUTWARD TELEGRAM
FROM THE SECRETARY OF STATE FOR THE COLONIES
En. Clair

The telegram itself is a monument evidence of British administration divided in execution of Ganapathy. The Prime Minister Atlee, felt that Ganapathy to be grant reprieve. But Gurney has a different plan for Ganapathy.

Why did Gurney give green light to Ganapathy's execution even after the Secretary of Colonies, Rees Williams, who tried to intervene at 11th hour? What was the role played by the Planter Association - the association of European capitalist who owned most of plantation estates in Malaya?

After the WW2, British economy was heavily depended on tins and rubber from Malaya. Without this, Brits economy will be crippled. With PMFTU, under Ganapathy, seemed to be organising massive strikes in estates all over Malaya, rubber production was badly effected. Thus, agitated estate owners, the Planter Association, wanted to "put off" Ganapathy for good.

Gurney feared that this telegram would have been leaked by his own men and being adamant to "put-off" Ganapathy, could this lead to Gurney's assassination at Fraser Hills on the October, 6th 1951?
In many interviews, Chin Peng denied his involvement in Gurney's assassination. He claimed that the assassination plot was staged by the local militia. Fraser Hill (where Gurney was killed) situated near Batu Arang which was a strong-hold ground of Indian unionist cum communist Ramasamy Vengadasalam who was also the vice-president of PMFTU. The act of total arrogance and folly of Gurney to see Ganapathy eliminated forever, could have stirred anger and revenge among the local unionists and militias like V. Ramasamy. 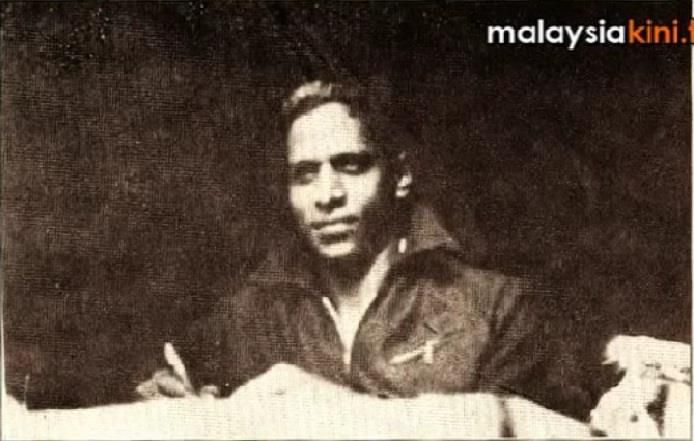 Ramasamy Vengadasalam born in 1920 in Batu Arang, was Vice President Of Pan Malayan Federation of Trade Union in 1948, close allies of S.A Ganapathy. Ramasamy was the most wanted unionist (after Ganapathy) in late 40s. Went underground after the British declared emergency in June 1948. He was shot dead on 22nd September 1956 (Saturday). He was 36 then. He was unknown to many. Not many has written about him. Rajeswary Ambalavanar has mentioned about him in one of her research papers for PhD dissertation back in 1975. News about his death was told to be reported in Strait Times on 23 September 1956.